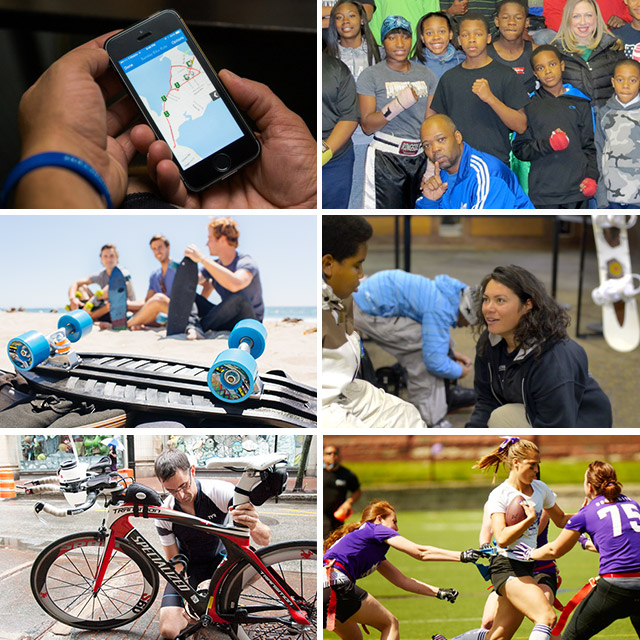 6 Reasons to Love Sports (Even If You’re Not Sporty)

When it comes to sports, people are divided. For some of us, baseball is America’s pastime, while for others, it’s all about the snacks (hello, frozen lemonade). The reality is, there are some truly inspiring stories in the world of athletics, from raising money for charity to overcoming life’s major challenges. Get your sneakers ready.

RunKeeper tracks progress and builds community so you can reach your goals. Photo by Porter Gifford.

“There are a lot of amazing stories that will give you chills. People write in who have faced dire health situations and then lose hundreds of pounds, quit smoking, et cetera, all using running, walking, and cycling to get back on track.” – Joe Bondi, co-founder of RunKeeper

While it can seem like phones make us disconnected, RunKeeper shows a powerful way that technology can harness a social community for the better. Anyone that has set an alarm for an A.M. workout knows that it can be a monumental struggle to get up and go. Enter RunKeeper, which maps your route and tracks your progress. Beyond that, the app offers a built-in social community of other aspiring and master runners to keep you motivated from couch, to 5K, to world domination (or maybe just a faster mile).

“‘Bureo’ is a native Chilean word that means ‘waves.’ We chose it to recognize the people of Chile, but it also represents that just as a wave starts as a small ripple in the ocean, we are starting a change in plastic pollution.” – David Stover, co-founder of Bureo Skateboards

When skaters David Stover, Ben Kneppers, and Kevin Ahearn learned about the issue of plastic waste in the Chilean fishing industry, they found a way to connect their passion for environmentalism with their love of skating. With the support of a start-up program in Chile and a successful Kickstarter campaign, they found a way to recycle fishing nets into eco-friendly skateboards. Each Bureo deck makes use of 30 square feet of fishnets, flipping a 180° in its use so you can flip a 180° on the board.

“It’s been a long journey [to show] people that cancer isn’t a death sentence…Doing it proves to myself more than anyone else — what’s the next big thing I can do?” - Chris Moulding, Zipcar Providence Market Manager

While Chris Moulding was in treatment for cancer, he saw an IRONMAN race on TV. At that moment, he told himself that he would compete once chemo was over. Twelve marathons and several half-IRONMANs later, he successfully upped the ante and completed an IRONMAN triathalon. (You know, the one where you swim 2.4 miles, bike 112 miles, and run 26.2 miles. No big.) He continues to live an impressively active life, motivated by the idea of being a healthy role model for his kids. Above and beyond that, he hopes to prove to cancer survivors everywhere that anything is possible.

Kids pile into a Zipvan to spend a day at the Detroit Boxing Gym with Chelsea Clinton. Photos by NBC Nightly News.

“We’ve been struck by the passion and hope that the Detroit Boxing Gym brings to not just the kids that attend the programs, but also to the community as a whole.” – Monica Wejman, Zipcar Detroit Marketing Manager

Detroit’s Downtown Boxing Gym helps a city in the midst of rebuilding itself have a community center for kids. The non-profit organization helps young teens physically, mentally, and emotionally, through boxing, tutoring, and volunteering. The golden rule? Schoolbooks before boxing. Chelsea Clinton went for a ride in a Zipvan with the boxers-in-training to show how time in the ring can improve life outside of it, and we’re certain you’ll be just as moved.

Elisabeth Toft helps a Chill participant lace up his boots so he can take on the slopes. Photo by Laura Barisonzi.

“The volunteers understand that we’re trying to change their outlook of how they see the possibilities for their life.” – Jesse Wilson, Chill NYC Manager

Chill teaches at-risk and underserved youth how to snowboard in twelve U.S. and Canada locations. They provide transportation, gear, instruction, and mentorship, while weaving themes into each of the six weeks in the program: patience, persistence, responsibility, courage, respect, and pride. Zipcar brand ambassador Elisabeth Toft gave us a behind-the-scenes (and on-the-slopes) look at the action—we’re totally onboard with the cause.

The Blondes v. Brunettes teammates get fierce in Boston, thanks to Carrie Allen. Photo by Josh Campbell.

“This event gives so many young women who have watched loved ones affected by Alzheimer’s — from parents to grandparents to friends — a way to take a stand against the disease, and in a way, to band together.” – Carrie Allen, Zipcar Senior Marketing Manager

With a family history of Alzheimer’s, Boston local (and Zipcar superstar) Carrie Allen wanted to get involved as a young voice for the not-so-young issue. Her surprising tool? Cleats. She brought the Blondes vs. Brunettes flag football game, which is in its tenth year of raising money and awareness for Alzheimer’s research across the country, to her new city. Last year, the Blondes were technically the winners in Carrie’s league, but the Alzheimer’s Association clearly came out on top, as the ladies raised over $63,000 (bringing the grand total to over $5 million since 2005). Touchdown.

Whether on the field or off the record, sports bring people together in a pretty powerful way when you put your mind (and body) to it.