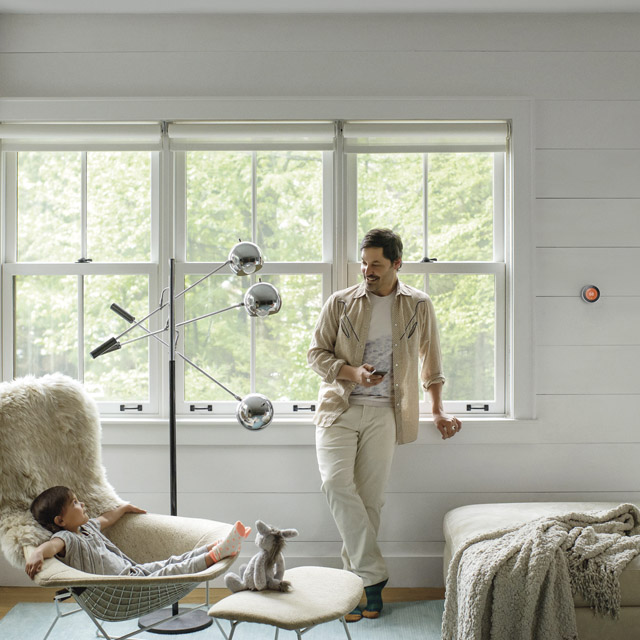 The Internet of Things: 8 of the Best Smart Home Devices

We love when the Internet makes our daily lives better. No, we don’t mean cat videos. (OK, maybe a little bit.) But mostly, we’re talking coffee makers that have a cup of joe ready when you wake up. Or thermostats that adjust automatically to your preferences. Or doorbells you can answer from afar.

To celebrate the glorious ease of the Internet of Things, we’ve rounded up eight of the best smart home devices. These plugged-in gadgets come outfitted with Wi-Fi capabilities and companion apps—all the better for an even more streamlined life.

NEST: Controlling your home’s temperature by phone? Yeah, that’s an idea we can get behind (especially when facing the prospect of returning to a cold apartment in the dead of winter). That’s the beauty of Nest, which adapts to your schedule and even keeps track of your energy usage, so you know when you can go greener. Added bonus: Nest also makes a smart smoke detector and a smart security camera, so you’re well on your way to a full-on smart house.

HAIKU CEILING FAN: Not looking for something quite as intensive as all that? The Haiku ceiling fan might be more your speed. Literally. The smart device automatically turns on and off when you enter the room. But there’s more to its IQ than that. The fan also tracks temperature and humidity, automatically modulates its speed in response to environmental conditions, and even has an alarm clock function. It’s a big fan—and so are we.

SMARTER COFFEE: A freshly made pot of coffee, tailored exactly to your preferences, as soon as you stop hitting the snooze button? Yeah, it’s not hard to guess why the Smarter Coffee is one of the best smart home devices around. The Wi-Fi enabled coffee maker can be controlled from anywhere in your apartment, sends you reminders when its water tank is running low, adjusts the coffee strength—and can even be set as a morning alarm. We’re in love.

Twist delivers a soundtrack with an illuminating…twist. Photo courtesy of Twist.

TWIST: It’s a light bulb! It’s a portable speaker! Wait…it’s a light bulb and a portable speaker? Meet the unlikely—but super cool—Twist. The bulb streams tunes from any app (and with high-quality sound, too) and even modulates its light during the day, beginning brighter and bluer in the morning and transitioning to a warm golden glow come nightfall. It’s the device you didn’t know you needed. But if you’re like us, yeah, you neeeeed it.

AUGUST SMART LOCKS: When it comes to the best smart home devices, most of these nifty, Internet-enabled gadgets find a place inside your house. But August smart locks and doorbell cams work a little differently. Instead, these guys are the gatekeepers to your humble abode, allowing you to swap jangly keys for a Smartphone, let friends in even when you’re not home, and answer the doorbell…from the office. Come on in.

Up your cooking game with the handy June Intelligent Oven. Photo courtesy of June.

JUNE INTELLIGENT OVEN: Wish you cooked more…but don’t trust your own abilities? It’s hard to mess up when you’ve got the June Intelligent Oven in your corner. It might not look like much more than a toaster oven (perfect for cooking in a tiny apartment!), but this countertop beauty can do everything from toast to slow-cook pork shoulder. Sensors figure out how best to cook whatever you’ve got on the menu, while Wi-Fi connectivity and an embedded camera stream live video to your smartphone. (Yup, you’re pretty much ready for a cooking show now.)

Breathe easy with the atmospheric Awair. Photo courtesy of Awair.

AWAIR: It looks a little bit like a cute, old-timey vintage radio. But the Awair has a lot more going on than that. The device is in fact a sensitive tool for measuring air quality, from allergens to humidity, temperature to carbon dioxide. It’ll let you know just what’s floating around in your space, and how to change things so you sleep better, sneeze less…even get more work done.

Keep your smart home safe and sound with a Dojo standing guard (and looking sleek) at all times. Photo courtesy of Dojo Labs.

DOJO: Who watches the watchmen? Or, in this case, which device makes sure that all your other plugged-in devices are staying as private as they should be? That would be the Dojo. Shaped like a smooth pebble, this unobtrusive object keeps you safe from hackers, malware, and other unwelcome intruders, and sends notifications to your phone whenever something fishy’s afoot. Safety first!