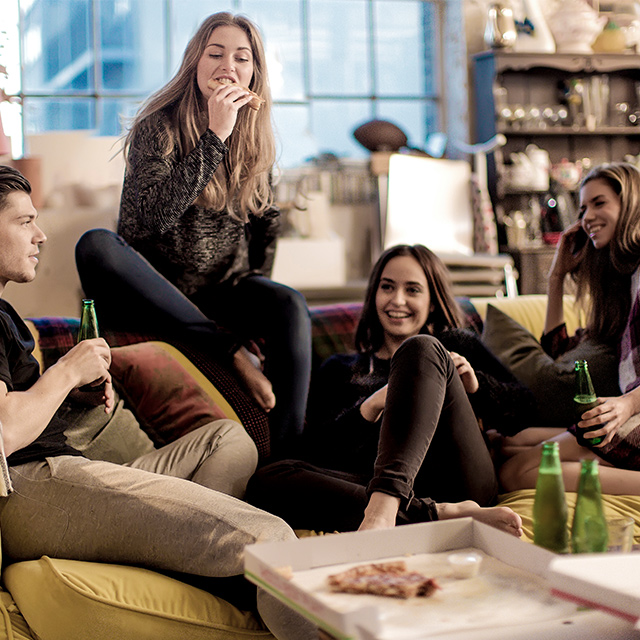 5 Types of Viewing Parties to Throw this Winter

Just when you thought you had to grin and bear winter, it turns out, 'tis the season for entertaining with friends and family through some of TV’s biggest events. Check out these five shows and televised events that can add color to your winter, life to your living room, and get you socializing offline again. No need to travel far, just whip up an online invitation and bring the party to you.

Nothing beats kicking back with a few friends, feasting on snacks, and watching an event together IRL.

Madison Square Garden plays host to the 60th anniversary of The Recording Academy’s annual award show. Gather your friends for a rare chance to catch live performances by Bruno Mars, Kesha, and Cardi B. Witness special honors for rock legends Queen and Tina Turner. Prep by stacking your Spotify playlist with Best Album and New Artist of the Year contenders. Some media outlets have called this year’s nominees the best yet.

What to wear: Suggest lookalike outfits (Jay-Z or Lorde, anyone?) or ask guests to come dressed as a music genre. See who can interpret R&B in rayon or Electronic in cotton blend.

What to serve: Chicken drumstick appetizers can add some oomph to your table. Opt for carmelized baked, buffalo style or country fried.

What to give: Music is timeless, so grab some old vinyl 45s as your party favors. Even without a record player, they’re fun for decorating walls.

Bring your besties and their belly laughs together for the televised version of the hit comedy podcast by Jessica Williams of The Daily Show and Phoebe Robinson of Broad City. Their show comes to HBO as four themed hour-long specials. Guests include Uzo Aduba (Orange Is the New Black), Tituss Burgess (Unbreakable Kimmy Schmidt), Sarah Jessica Parker (Divorce, Sex and the City) and Jon Stewart (The Daily Show). Get a primer with seven of the best episodes.

What to wear:  Have guests come as they are. Safe to say anything goes for 2 Dope Queens.

What to serve: Permission to ham it up with these ham-based appetizers.

What to give: To offset the snorts, guffaws and screeching giggles, have some of these noise makers handy.

Whether your group is made up of NFL fans or they just like to watch Madison Avenue’s most expensive commercials, pull up your couch to join 70,000 attendees at the U.S. Bank Stadium in Minneapolis. If the game doesn’t rile everyone up enough, there’s always seeing whether Justin Timberlake’s halftime show will make up for his last Super Bowl performance that ended in a “wardrobe malfunction.” Remember that? (Janet Jackson wishes she didn’t.)

What to wear: Team colors and jerseys are a given. But don’t be shy about your foam fingers and face paint, too.

What to serve: Tater Tot Hotdish. This traditional Minnesotan casserole has the right amount of meat and potatoes for a hearty winter game.

What to give: Celebrate NFL tradition with your personal Gatorade dunks. Pass out some squeeze bottles for your lemon-lime punch.

Get into the spirit by getting creative with food, like these Olympic-themed Oreo medals. Image courtesy of Messyjofu

Two options. Have a Pajama Party at 6 a.m. EST to catch the opening ceremonies live from Pyeongchang, South Korea or tune in during normal Prime Time hours. Games are also simulcast online at NBCOlympics.com and on the free NBC Sports app—so many ways to keep your eyes glued to the world’s best ice hockey, freestyle skiing and, of course, curling. Want to know when to record luge and ice dancing? Check out the full schedule here.

What to wear: Colors of your country team’s flag. Or anything Spandex—the shinier, the better.

What to serve: Pick up a jar of kimchi (pickled cabbage) and try your hand at Korean Scallion Pancakes.

What to give: Let your guests bask in the glory of their gold medals, courtesy of Oreo.

With Valentine’s Day around the corner, you might want to pre-game it with a Bachelor Watch Party—if only for some romance tips and turnoffs. Season 22 of ABC’s hit show has ladies racing for Arie Luyendyk’s heart on his comeback appearance, six years after being denied by the woman of his dreams in front of millions of viewers. Make it a weekly gathering to spice up your Monday nights.

What to wear: It’s Monday. Love is in the air. Save your sweatpants for another night and don your best date night outfit.

What to serve: Homemade candy hearts, of course.

What to give: You wouldn’t want to send any of your buds home without a rose, would you? Get some single stems from your local florist.