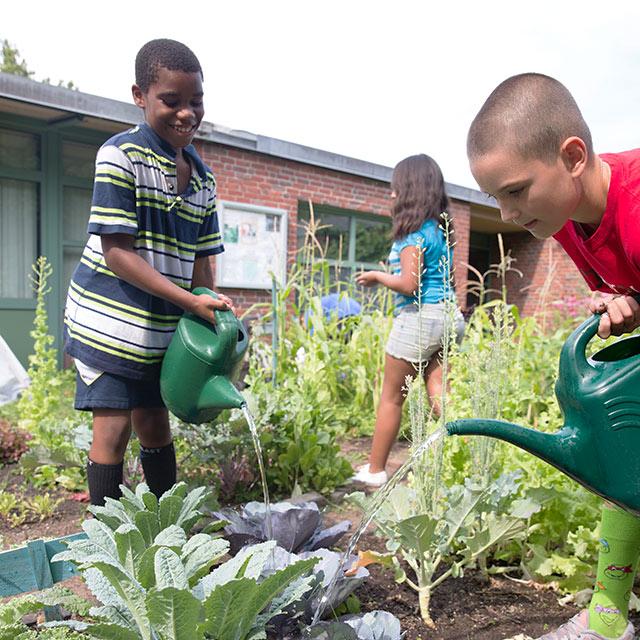 How to Start a Nonprofit: Lessons Learned from a Founder

While starting a nonprofit can be a challenge, it’s well worth it to see how much children (and teachers!) love working in the gardens, notes Hirschi. Image courtesy of CitySprouts.

Are you ready to take your activism to the next level, but aren’t quite sure where to begin? Starting a nonprofit is a wonderful way to grow your cause…but it can also be a daunting process.

We talked to Jane Hirschi—founder of CitySprouts, a nonprofit based out of Cambridge, Massachusetts whose mission is to place school gardens in collaboration with urban public schools—to gain some insight into how to get started with setting up a nonprofit organization, and the lessons she’s learned along the way.

1. How did you come up with the concept of CitySprouts?

I came up with it shortly after my daughter started in Pre-K. I was coming into her school as a parent and I love to garden so I thought I’d bring in some food and seeds to show the children.

It snowballed. The children were so hungry for that kind of experience, and equally important, the teachers loved it… We had a social problem and a solution: to make the environment accessible to kids in urban areas. And then there’s the healthy eating part. Not just eating from a full range of fruits and vegetables, but the ones that are growing in your region.

Hirschi came up with the concept for CitySprouts after visiting her daughter’s Pre-K classroom—and many more kids benefit now, too. Image courtesy of CitySprouts.

2. What caused you to turn the idea into a reality and build it into a nonprofit?

I did not begin with a strong business plan and I think it’s remarkable and a testament to the need that we ended up with a viable business model. But I was one of several people starting CitySprouts. Having people in the public school system to navigate it was key.

3. What is the first step to starting a nonprofit organization?

We started with three or four teachers, a school principal, and a few other parents. We were going into classrooms with a cart of seeds, potting soil, cooking pots, etc. It was growing and cooking from the start. Beyond that, it was incorporating as a nonprofit. Establishing a board, setting up the business pieces, those as well.

4. What was the most difficult thing about starting a nonprofit?

I would do many things differently in retrospect. It would have been great to have a strong business plan when we started, but on the other hand we didn’t know how far this would go. It took some time. There was one school first, then within six years we were in all of the schools in Cambridge. Within seven years, we had funding from the district.

5. What have you learned along the way that you wish you knew from the start?

I think there’s a lot to be learned by finding someone or an organization to mentor you. I would certainly have benefitted from working with other nonprofits. And B Corp businesses, too. I didn’t know much about that concept.

There’s a lot to be learned. There are a lot of resources out there, too. If you are starting a nonprofit, really pay attention to what’s happening in your neighborhood, town, city, and region. Use the things that are working. Let it mature in concept before you spring it on the world. Talk to other people about it. Look and see what else is out there.

6. In 2017, we’re seeing a lot of people getting more involved in grassroots and activism. What tips and advice do you have for people who are thinking about starting their own nonprofit organization?

Yeah, especially working with children. In 2007, we started an out-of-school program working with kids aged 11-14. This out-of-school time is an incredibly important time for children. You can really focus on fostering environmental stewards and activists. We’re working right now on a unit about climate change and social justice and boy, do they like that. And giving it to them in a way that they are not just paralyzed by that. Kids have a role in that. So, out-of-school time, and middle schoolers are the best. People should consider working with that age group. It’s a real turning point in one’s life.

And environmental education connects with transportation, as well. I’ve become much more passionate about urban transportation since I’ve worked with kids. They use bicycles and public transportation. And urban life –they’re the leaders. There are many frightening things happening environmentally, and many positive. If we can engage our youth, I think the potential is enormous.

If you’re thinking about starting your own nonprofit, nurture connections with your community, other nonprofits, and B Corp businesses, says Hirschi. Image courtesy of CitySprouts.

7. What was the most surprising thing to you about starting a nonprofit?

I think the most surprising thing to me was how many different kinds of children loved the garden. You think children who grew up playing outside will, but what I didn’t anticipate is that kids who had never been exposed to it would love it just as much. I’ve been surprised at how much teachers and families love it, too. They can see how important it is.

Without that demand from families, we almost would have given up. It’s a lot of work. When I feel like it’s too much to learn or too relentless, I feel like I can’t let those children or their families down. We can’t give up.

8. How do you recommend people get started in activism and nonprofit work?

Jane Hirschi was introduced to school gardens more than fifteen years ago when her children first started kindergarten in the Cambridge Public Schools. As the founding director of CitySprouts in 2001, Jane has been an integral part of building the CitySprouts program in Cambridge and Boston, Massachusetts. She grew up with lots of space and time to climb trees, explore her neighborhood, and turn compost with her dad in the backyard. Jane is passionate about making sure that all children have the chance to know the natural surroundings where they live, whether that’s country or city. In 2008, Jane was selected as one of six regional Social Innovators by Root Cause Social Innovation Forum. Jane holds a Masters in Communication Studies as well as a Bachelor of Arts in Philosophy from the University of Maine at Orono. Her book, Ripe for Change: Garden-Based Learning in Schools, was published by Harvard Education Press in 2015.