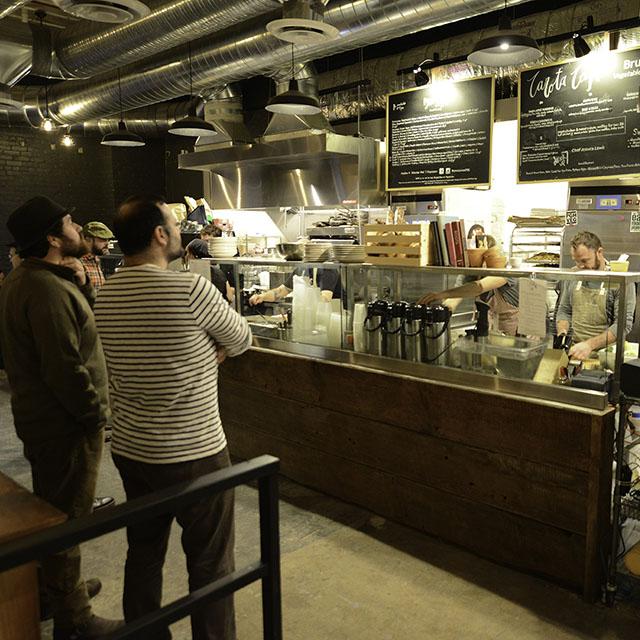 With maybe the exception of the Julia Child-era, food has never been more hands-on, original, and popular. Why the surge? Maybe it’s because the public has truly become invested in where their food is coming from, or maybe it’s no longer enough to just have a good meal—people expect a great experience, too.

This movement isn't just happening in major U.S. cities either; it's happening all across the country. Food trucks, farm-to-table philosophies, specialty-focused restaurants—they have all become a reality and are rapidly changing the way people think about and enjoy food.

When it comes to Pittsburgh’s restaurant incubator, Smallman Galley, too many cooks definitely don’t spoil the broth.

IN WITH THE NEW

Pittsburgh, Pennsylvania, has been one of those cities benefiting from the rejuvenated focus on food. Restaurant openings are at a peak; chefs and restaurants have been featured in major publications like Food & Wine and The New York Times; and four restaurants were James Beard Award semifinalists this past year. The incredible forward progress has created an insatiable desire for more—more types of cuisine, more independent establishments, and more innovative concepts.

One such new and innovative concept is Smallman Galley. Launched in December 2015, Smallman Galley was born from an idea Pittsburgh loves: community.

Tyler Benson and Ben Mantica are the two entrepreneurs behind the new concept. It was during their travels in the Navy that the duo first discovered food halls, typically  indoor markets that showcases local food vendors and artisans. “The one thing we really loved about food halls was that they were the centers of the community and they brought people together,” says Benson. It was that sense of community that made them realize the concept would be a perfect fit for the Steel City.

BUT WHAT’S A RESTAURANT INCUBATOR?

After doing some research, Benson and Mantica discovered the demand was greater than just opening a food hall. Members of the local chef community, especially new chefs, wanted a space where they could fully immerse themselves in learning how to run their own restaurant.

Borrowing concepts used by technology start up companies to help quickly increase knowledge and success rates, Benson and Mantica developed the idea for a restaurant incubator. The result? An intense 18-month program that provides chefs the skills needed to open and maintain their own brick-and-mortar establishment. Unlike restaurant incubators in other cities, Smallman Galley hosted a regional search to secure the first four chefs to call the location home. After the first 18-month period is up, four more chefs will be selected to start on their journey toward the American dream. Rinse, repeat.

While the dishes are different, each startup eatery focuses on freshness and quality.

Each chef will run his or her own restaurant housed inside Smallman Galley, Tuesday through Sunday. On Mondays, the chefs will be given training from local industry experts like Shift Collaborative, SBDC, URA, and Community Kitchen Pittsburgh. For the first 12 months, topics are broken down into three-month-long semesters focusing on business plan development, financing and legal, restaurant operations, location procurement, and more. The final six months focus on launching each chef's own restaurant. During this time, the chefs will be finding locations and working to secure investors through “Shark Tank-like” private dinners, during which the chefs will cook for 20-25 potential investors and deliver the pitch they've been perfecting.

Smallman Galley will also whet your whistle with local brews and small-production vino.

Stephen Eldridge, Jessica Lewis, Rafael Vencio, and Jacqueline Wardle are the chefs that make up the inaugural class of Smallman Galley. Each chef entered the program with notable experience and a distinct focus for their restaurant’s menu.

Chef Eldridge packed up his family and moved across the country to be a part of Smallman Galley. His seasonal menu is meat-centric and showcases local farmers, ranchers, and artisans.

It’s all about the vegetables for Chef Lewis. Well, almost. Her menu is largely focused on seasonal, fresh produce using meat and seafood as accents—not the stars. Think dishes like kale and eggs, borscht, and fresh pressed juices.

Originally from the Philippines, Chef Vencio came to the United States at 19 years old. Drawing on his background and industry experience, Chef Vencio’s menu centers on regional American dishes like fermented sauerkraut, pot roast, clam chowder, and pork sugo. Look for a frequently changing menu that capitalizes on using the same ingredients in as many dishes as possible.

Toast might not be the first ingredient that comes to mind when building a restaurant concept. But then again, you’re not Jacqueline Wardle. Chef Wardle’s menu features items like beef bourguignon on brioche toast, winter squash soup with whole wheat toast, and upside-down toast cake.

Each chef will be given a Zipcar to conduct day-to-day sourcing. With wheels at the ready, the chefs will be connected to the local businesses from where they're sourcing. “Whether it's picking up fresh meat at the butcher shop or driving to a farm to get the first harvest, I want to be able to bounce around the city and utilize the abundant resources that are unfamiliar to many,” says Chef Vencio.

Chef Lewis will make sure you get your greens (and love ‘em, too).

FROM NIGHTCLUB TO INNOVATION SPACE

And just where will all this magic happen? At the 6,000-square foot space located at 2016 Smallman Street in the Strip District. There, the four distinct restaurants are housed, each with its own brand identity, kitchen, and lunch, dinner, and brunch menus. Previously Headquarters Night Club, the interior was opened up and stripped to the bones to expose ductwork, brick, and reclaimed wood, tying the new space to its old “ingredients.”

As for the dining experience itself, guests walk up to any of the four counters and place an order at a tablet. Once the order is ready, guests receive a text message telling them that their food is ready to be picked up. The main seating is open and communal (and abundant—no reservations are required), but diners can also pull up a stool at the 50-seat bar.

Speaking of the bar, Will Groves—formerly of Marty's Market in the Strip District and Legume and Butterjoint in Oakland—oversees the bar program, where twenty rotating Pittsburgh craft beers, small production wines from around the country, and cocktails pairings enhance the overall dining experience. There is also a robust coffee program that will continue to foster community pep during the day.

A concept that might not have even been possible a few years ago, Smallman Galley is helping to disrupt the food scene in Pittsburgh—for the better. It’s giving independent chefs the opportunity to showcase their talent. And in turn, helping to show off just how cool Pittsburgh and its food industry have become. We can’t wait to see where more restaurant incubators—and cool new restaurants—will pop up next.

Chef Wardle’s toast-centric menu is the best thing since sliced (and heated) bread.

Julia Gongaware is a Pittsburgh-based food writer and co-founder of eatPGH, a company dedicated to elevating Pittsburgh food and tourism through event production, community activism, and feature writing. Along with her eatPGH partners, she recently published her third book, the Food Lovers’ Guide to Pittsburgh, Second Edition.

When Julia isn’t dreaming about food, she can be found developing digital marketing strategy for the largest employer in Pennsylvania and teaching a course on personal branding at Point Park University, in Downtown Pittsburgh.