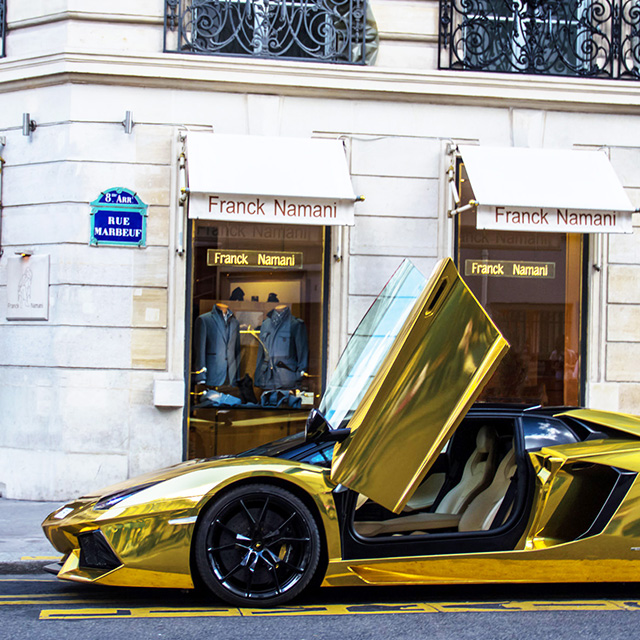 A $1 Million Parking Spot (And Other Totally Mindboggling Car Purchases)

But not all drivers prize affordable rides. Some of them pay millions for prime parking. Or hundreds of thousands for car washes. Or, y’know, carve their Lamborghinis out of blocks of gold. In the spirit of cash splashing, the following are some of the most mindboggling car records that we’ve encountered. Buckle in.

Parking in the city is never fun—and, in order to save time that would otherwise be spent circling the block (and burning through fuel), it can be worth paying for the convenience of a parking garage.

But is it worth paying $1 million for a parking spot to call your own? For residents of 42 Crosby Street in New York, the answer in 2014 was yes, making this one of the craziest car records out there. In another twist, that fee didn’t even promise ownership. Instead, it was listed as a 99-year license, and must be sold if the resident moves away. Convenience is great. But is it a million smackeroos great?

With $1 million on a parking spot, your car might have more in-demand digs than you do. © Tramino/iStock

If parking spots top out at a cool million, where do you go from there? The cars themselves, naturally. This year, the most expensive car bought at auction was this beaut: a 1956 Ferrari 290 MM by Scaglietti, which went for $28 million at RM Sotheby’s sale in December. Beyond being an exceptional (and pricey) model, the car is also something of a racing legend, having been driven in Italy’s iconic Mille Miglia race in 1956.

But that still doesn’t shine a candle to the most expensive car ever sold (seriously: it’s in the Guinness Book of World Records). That happened back in 2013, and (spoiler alert) also involved a Ferrari. The 1963 250 GTO, to be exact, which was sold to a private buyer for an unbelievable $52 million. Ouch.

Speedy, red, shiny…and the most expensive set of wheels ever. © Bonhams
MOST EXPENSIVE FILL-UPS (AND TUNE-UPS)

Think the price of gas adds up? Don’t even think about building a gas station. Meet what is likely the most expensive in the world: a remote outpost in Afghanistan which cost—gulp—$43 million to construct.

Beyond the fill-ups, what about your everyday car maintenance? If you’re looking to drop some stacks on a truly high-end car wash, you could always venture to Ultimate Shine in Fife, Scotland, where a scrub-down costs more than $100,000. You know, just the usual.

Now it’s on to the blingiest car records around. Beginning with license plates—yes, license plates. Several years ago in Abu Dhabi, a man broke records by paying a reported $14.3 million for a plate that simply read “1”. Here’s hoping he doesn’t plan on speeding; that’s a pretty easy one to memorize.

You’re number 1! (Well, the owner of this exorbitant license plate is.) © Jerry “Woody”/Flickr

Of course, if you’re looking to make a statement, diamond rims don’t hurt. Asanti makes some of the most coveted in the game, and their rims frequently appear on celebrity-owned vehicles. For those interested in the sparkling variety, the full set of four costs upwards of a million dollars.

The best thing about this car model? Its subtlety. © streetcarl/Flickr

But if diamonds still aren’t quite impressive enough, you might as well go the full monty. May we direct your attention to this gleaming, golden Lamborghini Aventador? Parts of the car have been carved out of solid gold, and the starting auction bid when the model made its debut in 2013 was listed at $7.5 million, making it the world’s most expensive model car. Yeah, we might not park this on the side of the road, if we were you.