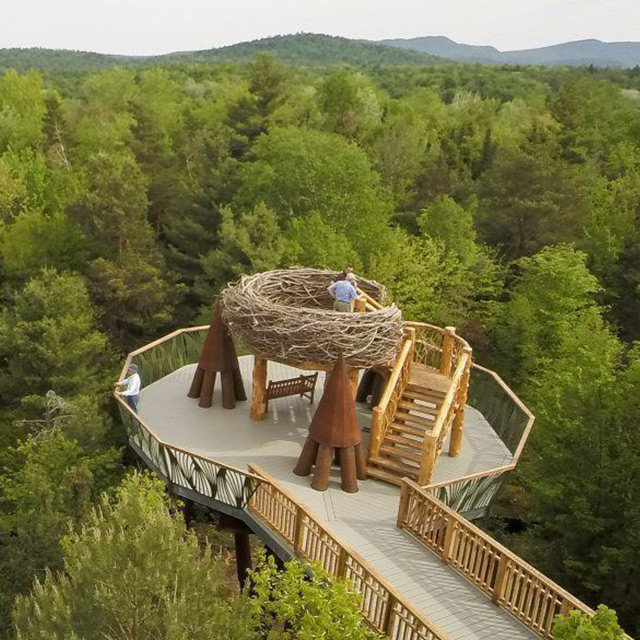 The Best City Playgrounds Are Innovative, Accessible, and Freaking Awesome

In the good ol’ days of childhood, having fun didn’t require making plans, buying tickets, or splitting the check seven ways. All it took was a swing set and a sandbox.

While kids these days are already light years ahead of that, what with their iPhones and Xboxes, cities are compensating by building some pretty awesome playgrounds. What used to be the standard—metal ramps and slides, connected by monkey bars—is giving way to imaginative new designs, in addition to much-needed accommodations for children of all mental and physical abilities.

You won’t see a boring seesaw on a bed of wood chips here. These eight playgrounds represent the best of the best in U.S. playtime.

Inspired by the Fibonacci sequence, the Harry Thomas Sr. Playground transforms math (not everyone’s favorite subject) into playful spirals (something pretty much all kids can get behind). The twists and turns of slides, swings, and stairs reflect the increasing pattern where each new number (or size of the spiral) is the sum of the previous two: 0, 1, 1, 2, 3, 5, 8, 13, and so on. Plus, bio-retention landscaping, rain gardens, and community plots add all the educational tools you’ll need for a budding gardener.

This parking-lot-turned-playground incorporates the agricultural industry of the area (literally nicknamed “The Salad Bowl of the World”) with a virtual vegetable garden for the aspiring green thumbs. The pretend environment at Tatum’s Garden gives kids a fun way to learn about their surroundings (and, in some cases, their family’s livelihood). Additionally, a quiet corner provides unique solace for children who might be overwhelmed by typical play environments.

BUILD YOUR OWN ADVENTURE: Providing tools to DIY.

It’s no surprise that you’d find something unconventional in California’s hippie capital of Berkeley. In 1979, the city established Adventure Playground, a half-acre of modifiable structures where youngsters are encouraged to build, hammer, and paint away their innovative ideas. While the idea is to promote independence and self-confidence for the players, the park encourages parents to join—but to keep their cell phones in their pockets.

All right, this one is cool not because of the amazing features, but because of the amazing lack of features. At Imagination Playground, simple elements like sand, water, foam blocks, and fabric make the blank slate a perfectly customizable opportunity. Kids build their own playground by mixing, matching, constructing, and dismantling, exercising body and mind.

PLAY FOR ALL: Accommodating all levels of physical and mental abilities.

When April and Cody Goldberg found that their local playground couldn’t accommodate their daughter’s wheelchair, they founded Harper’s Playground to build accessible and inspiring playspaces. By eschewing conventional (and, let’s face it, kinda boring) “prescribed play” structures, they focused on progressive designs that are creative, inspiring, and open to all. The project is so successful that Cody shared his findings on a TEDx Talk and the foundation has two new Portland locations in the works for 2016.

The accessible design of Discovery Playground goes beyond ramps to affect all ways of play. Photo by Year of Seattle Parks

Discovery Playground was designed to be a truly “barrier-free” environment for everyone. While some playgrounds simply add a ramp and call themselves “accessible,” the City of Auburn incorporated design elements for a variety of needs and levels of development. Elevated sand tables replace sandboxes, back-supported swings replace traditional swing sets, and a sensory garden dedicated to the five senses invites all kids to engage with sight, sound, taste, smell, and touch.

OUT OF THE (SAND) BOX: Just straight-up cool.

Every twist, turn, climb, and jump at Monstrocity makes use of reclaimed materials and a hefty dose of imagination. Photos by Flickr/amonroy (left) and Flickr/rsgranne (right)

Located outside the City Museum in the heart of St. Louis, the larger-than-life structures of Monstrocity are hard to define. The self-described "eclectic mixture of children's playground, funhouse, surrealistic pavilion, and architectural marvel" takes inspiration from the city’s urban roots and refurbished two airplanes, a fire engine, and four-foot-wide Slinkies to create a whimsical construction like you’ve never seen. Visitors do have to pay admission to enter, but the pictures suggest it’ll be well worth it.

A photo is worth a thousand steps at New York’s immersive and eye-opening Wild Walk. Photo by Wild Center

If you’ve ever walked NYC’s High Line, you know the magic of seeing something from a difference perspective—even if it’s just 30 feet off the ground. Upstate in the Adirondacks, prepare for a truly adventurous take on a raised walkway: Wild Walk. Ramps and towers rise over the treetops, taking you through a four-story tree house, crossing through a climbable rope spider web, and ending at a full-sized bald eagle’s nest. Now that’s magical.