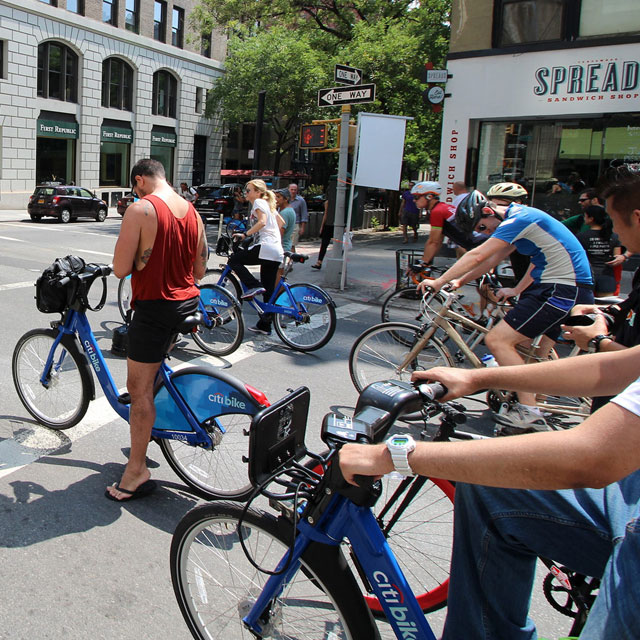 Let’s Be Friends: The Road-Sharing Guide for Drivers and Cyclists

May brings post-April-shower-flowers—and National Bike Month, of course! In the past decade, the percentage of commuters traveling on two wheels has increased a whopping 60% percent. While it’s a positive change as far as our fitness is concerned, it’s also a big hit with Mother Earth, too.

But the road isn’t always smooth for cyclists. In fact, urban cycling can be downright dangerous, especially when drivers (and cyclists) aren’t up-to-date on the rules of the road. Time for a quick brush-up. Whether you’re a daily driver, a sometimes-motorist, or a speed demon cyclist, these quick tips on how to share the road will help ensure everyone’s safety and happiness.

Leave 3-feet, please! Most states require a buffer zone between drivers and their biking brethren.

Back in 2011, cyclist Casey Neistat was ticketed $50 in Manhattan for riding on the sidewalk – and all because he was swerving out of the way of an obstruction in the bike lane. In protest, he made a video—that quickly went viral—showing him colliding with all the impediments in his local bike lanes, from construction sites to trash cans to, ahem, police cars.

We can only hope that things have gotten better in the ensuing five years. The moral of the story: brush up on local rules when it comes to turning through bike lanes, and definitely don’t use them as a personal parking spot.

Remember to use (and look for) cyclists’ hand signals to indicate turns and stops.

MASTER THOSE HAND SIGNALS (AND RULES OF THE ROAD)

No, those cyclists with their hands in the air aren’t doing a weird new dance (or about to bust out some flash mob-style choreography). They’re signaling to drivers whether they plan to turn left, right, slow, or stop. It’s to everyone’s benefit to get familiar with the language, and this video produced by the League of American Bicyclists is a good place to begin.

This might also be a good time to read up on your state’s laws: many require giving cyclists a minimum three-foot buffer, include details on how to pass safely, and give cyclists the right of way in certain instances.

It’s important that everyone on the road is in the know, but you can’t assume that your fellow cyclists are all Tour de France (or at least bike messenger) level. With the advent of bike-sharing services the likes of Citi Bike, many urban cyclists will be relatively new to cruisin’ around town on two wheels. Give everybody the benefit of the doubt, not to mention a good amount of space and patience.

Look before you open your car door into a bike lane. Cause ouch.

BE AWARE WHEN YOU’RE PARKED, TOO

You’ve navigated to an on-street parking spot and you’re safely out of the bike lane. That’s a great start. But depending on how your city’s streets are laid out, don’t turn off your vigilance with your engine. Instead, look over your shoulder before you get out of your ride to ensure no cyclists are riding up next to you. Trust us: no one wants to get doored. (Statistically, it’s one of the most likely cycling accidents to occur in urban centers.)

Drive now. Chat later. It’s safer for you and for our two-wheeled compadres.

KEEP DISTRACTIONS TO A MINIMUM

This rule isn’t just relevant for when you share the road with cyclists—it’s relevant always. We all know that driving and texting is a serious no-no, but studies show that driving and chatting (even on a hands-free device) is still distracting enough to draw drivers’ attention from the road. Best to save the chitchat for the end of your journey.

Whether you’re a driver or a cyclist, it doesn’t hurt to brush up on your two-wheeled techniques. Look for resources like San Francisco’s Urban Bicycling Workshops, which are offered free to locals and help bikers of all levels navigate traffic safely. Putting yourself in the bike seat? Now, that’s how you share the road.