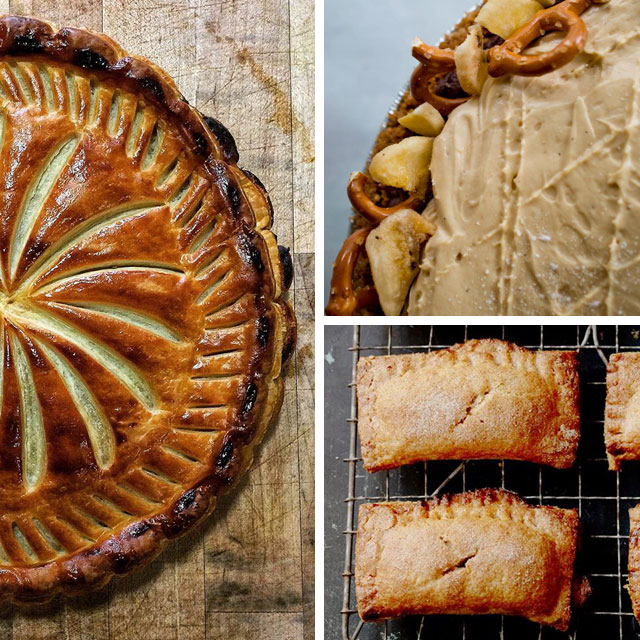 How Sweet It Is: The Top 10 Desserts Across the U.S.

Of all our posts, this is sure to be the most controversial. Pick ten of the best sweet treats from all across the US? Are you kidding me? Only ten? You could write an entire novel based just on the types of artisanal gelato available in one block of Williamsburg.

But we did the tough work for you and narrowed it down. Take a stroll through this list of puddings and pies, cookies and shakes, and tell us… Have we got it right? Did we miss a big one? Share you fave in the comments below.

Also, it must be noted that we don’t condone eating all of these confections in some sort of week’s long, dessert road trip Bacchanalia. Pace yourself.

Reading the signs alone is worth a trip to this rice pudding palace. (Photo courtesy of Rice to Riches)

Rice pudding is apparently the new croughnut. New Yorkers wait in line at this Midtown Manhattan pudding purveyor to try flavors like The Edge of Rum Raisin, French Toast, and Chocolate Flirt. The cheeky signs keep you entertained while you wait, saying things like, “If there’s no rice pudding in heaven, I ain’t going.” and “No Skinny Bitches.” Adding to its trendiness, this gourmet pudding cafe was recently featured on the HBO show Girls, so it seems like a good place to have a fight with the girl you thought was your “best friend,” but who is secretly dating your ex-boyfriend. She is??? Yep. Don’t worry. The homey deliciousness of Rice to Riches pudding will make it all better. P.S. You can also get rice pudding at Magnolia Bakery if you’re in from out of town and had your heart set on doing that SNL “Lazy Sunday” music video re-enactment.

If you don’t normally drink honest-to-goodness, not diet, not stevia-spiked, real sugar soda, this might be the time to make an exception. In addition to 2,000 (!) varieties of candy, Big Top has an authentic, old-fashioned soda fountain where they will make you a custom soda to your exact specifications. Vanilla-Black-Cherry-Red-Hot Root Beer? Right away, sir. How about a Blueberry-Pink-Bubble-Gum-Lime Rickey? Here you go, Ma’am. (Texans are so polite.) Or if you just can’t decide, go for one of their house specialties, like the Chupacabra: RC Cola, vanilla, root beer and cream. Sometimes, it’s okay to drink your dessert.

So many colors. So many flavors. Only one mouth. (Photo courtesy of Donut Bar)

Started in San Diego, the Donut Bar recently brought their sinful treats to Sin City. Oh, and sin you shall with indecently delicious choices like the Big Poppa Tart Donut, which is a doughnut with a Pop Tart baked inside, along with extra strawberry jam and cream for good measure. Their colorful and imaginative flavors change daily, and are the stuff you dream about when you dream about doughnuts. Chef Santiago whips up worth-the-wait French Toast doughnuts that are hearty enough to make a meal. Big props to DB for crafting a very special Zipcar donut. What’s inside? You’ll have to try one to find out. Perhaps it will be light and airy to symbolize the feeling of not being weighed down by the burdens of car ownership.

Fat Elvis has left the building. And been eaten. (Photo courtesy of Hosier Mama Pie Company)

Hosier Mama wants to make sure you save some room for dessert. Whether you try their fulfilling classics like Sour Cream Dutch Apple pie or the “Fat Elvis” tart – made with pretzels, graham crackers, bananas, chocolate Pudding and a cream cheese & peanut butter frosting – you better build in some time for a nap. They get props for keeping it local, getting all their fruits and veggies from nearby farms. Their rhubarb and Granny Smith apples hail from Michigan’s own Ellis Family Farm, and their sweet potatoes and squashes are grown at an Indiana farm called Green Acres. Where’s Opie? (He was in that show, right?) Well, it’s all pretty dang adorable is what it is, and delicious. Grab a fork and tuck in.

This California bakery turns out cakes so lovely, Betty Crocker would hang up her apron. (Photo courtesy of Susie’s Cakes)

You’ve heard the cupcake craze has waned, but who doesn’t want a cupcake right now? Baked from scratch in their kitchen in the Brentwood neighborhood of LA, Susie’s Cakes come in plenty of varieties from Red Velvet to Vanilla Pink to Flourless Chocolate. Most creative? The Morning-After Mimosa Cupcake, a little, edible version of hair of the dog. And if you’re so over that trend, there are cookies, brownies, lemon bars, whoopee pies and full-sized cakes to serve your whole squad. Old-fashioned six-layer chocolate cake? Six layers?! Oh my.

They may disagree on the North End’s best cannoli, but at least Bostonians can agree that the Yankees suck. (Photo courtesy of Mike’s Pastry)

Boston likes rivalries. So when it comes to the best cannoli in Boston’s version of Little Italy, the North End, you’ll find an age-old dispute. Two bakeries, Mike’s Pastry and Modern Pastry, stare each other down from right across the street. Mike’s always seems to have a longer line (tourists) but Modern is often quoted as the favorite of local Bostonians who are cynical of anything so popular with the masses (except the Red Sox). Do your own taste test (divide and conquer so you only have to wait in one line) and then decide which pastry shop deserves the Cannoli King crown.

They hand-deliver warm cookies and milk! Where is a Nobel Peace Prize when you need one? (Photo courtesy of DeLuscious Cookies and Milk)

What’s that you say? Don’t waste your time with a vegan dessert on this highly competitive list of the top ten sweet treats in America? Hold the phone! Give me an amazing oatmeal raisin cookie over a so-so piece of chocolate cake any day. And a vegan version that they say tastes better than the classic? Do tell! It might be the plump California Thompson raisins, or possibly the oats rolled in their unique blend of spices, but this chewy delight is one smart cookie. There better be some almond milk on hand to wash this down. Of course there is. They also do hand delivery in the LA area of a dozen, freshly-baked cookies and a pint of milk! (In case anybody reading this wants to get me a surprise gift.)

French-inspired macaroons get the N’awlins treatment. (Photo courtesy of Sucre)

The French influence of New Orleans is baked right into its culture (and its pastries). From the Cajun style language to the uniquely New Orleans cuisine, there is a homey and rich blend of French and spicy southern flare. The macaroons at Sucre are no exception. Try the New Orleans Macaroon Collection, but bring a couple friends. (They’re little, but fifteen of these babies might be a lot for one sitting.) New Orleans style flavors like Southern Pecan, Big Easy, Bananas Foster, and Chicory Macaroons are intriguing enough to make this a must-go dessert destination. Laissez le bonne temps roulez!

Here’s where you can order a mason jar full of molten chocolate goodness in Seattle. (Photo courtesy of Hot Cakes)

For a town best know for its coffee, Seattleites are also pretty particular about their accompanying fare. Locals are big fans of Hot Cakes, featuring local, certified organic, and non-GMO ingredients. They use old-school techniques and craft their treats in small batches to ensure the purity (and pleasure) of their confections. They are famous for the original and organic, take-and-bake, molten chocolate cake in a jar. They also sell Butter Beer Hot Chocolate for $4, and whatever that is, I want it.

San Francisco is an eclectic conundrum, with its crunchy Haight and Ashbury side and its tony Nob Hill side. It is on all sides, a foodie paradise. For the upscale dessert extraordinaire, we have Tartine, the French-inspired pastry shop serving coffee, lunch and amazing breakfast treats that you’ll stare at for so long that they’ll make you late for work. Try the simply named Morning Bun: cinnamon, sugar and candied orange. Yes, please. I’ll take twelve. Then come back after 4:30pm to get a loaf of their freshly baked daily bread.