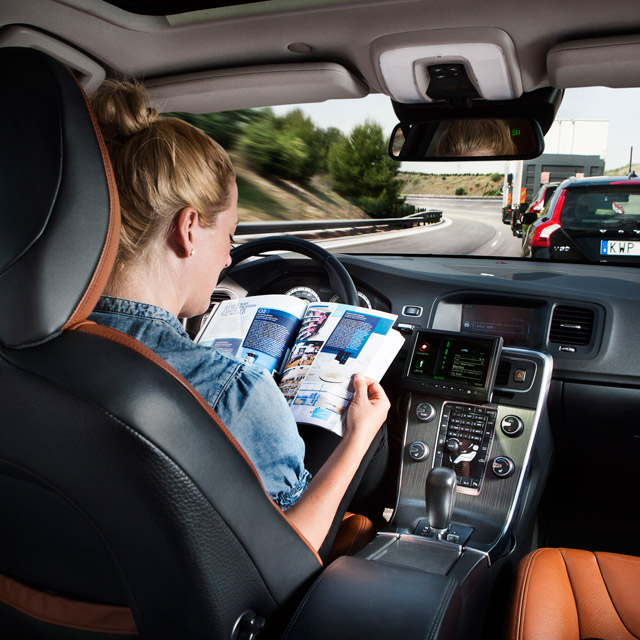 The 10 Most Disruptive Transportation Innovations of 2015 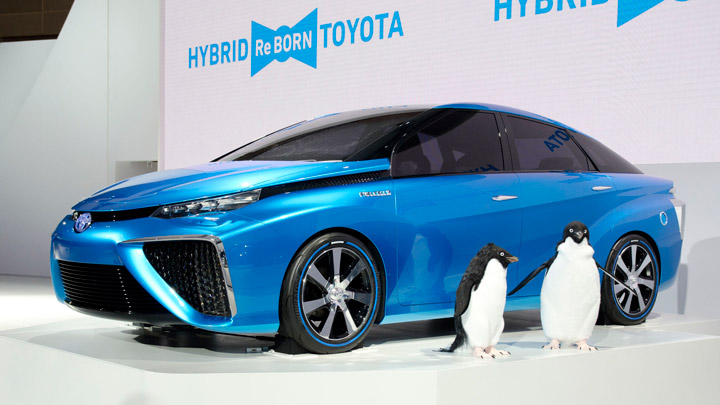 The 2016 Toyota Mirai Fuel Cell Vehicle. It emits only water vapor rather than carbon. The penguins dig that. Image courtesy of Wikipedia, Toyota Mirai.
1. THE SOFT CELL: FCVs

We know that the biggest contributor to climate change is CO2 emissions from fuel combustion. You know, the kind produced by the personally-owned, gasoline-powered vehicles we drive in droves every day. Now, what can we do about it? Well, drive less (duh). Getting rid of your car and using car sharing services, public transit, and your feet to get around is certainly one way to curb your carbon car-print.

For those itching to stay at the wheel, an idea that has taken inroads is fuel cell vehicles (FCVs). FCVs have the power to drastically reduce our dependence on foreign oil and produce fewer harmful (aka iceberg-melting) emissions. They run on hydrogen gas rather than gasoline and emit just a teensy bit of harmless water vapor from the tail pipe. (Don’t worry. They’re not filled with hydrogen gas, if you’re suddenly thinking about the Hindenburg.) It gets a little technical, but in essence, they use hydrogen fuel and oxygen from the air to produce electricity.

Toyota has already sold out of its first 1,000 fuel cell cars (the 2016 Mirai) and is setting up 34 hydrogen fuel cell stations in California. Still, FCVs confront major challenges (infrastructure being one of them) before these vehicles can be competitive with the good ol’ automobile, but the potential benefits of adopting this new technology are huge. We’re hoping FCVs will be road-ready soon so we can add ’em to the Zipcar family. 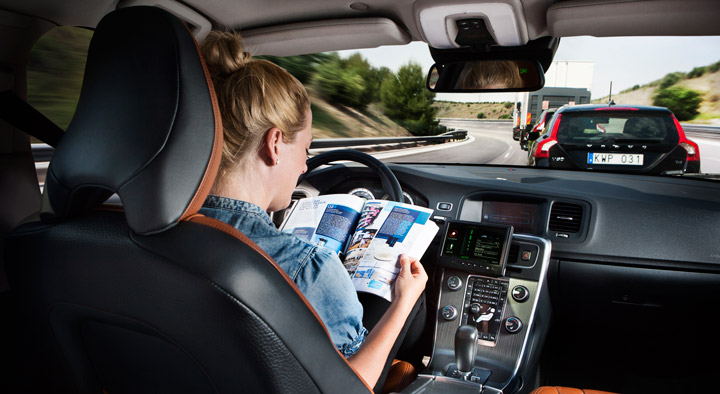 Image courtesy of Partcatalog. Self-driving cars of the future will do the driving so you can catch up on the celebrity gossip.

2. LET'S ALL BE BACKSEAT DRIVERS!

Whether you call them autonomous, driverless, self-driving, or straight-up robot cars, we know this: they’re coming! Estimates vary wildly on exactly when they’ll be coming, but they will be part of our lives faster than most realize. In fact, if you’re driving near Google’s campus in Mountain View or a 70-mile driverless vehicle test highway in Virginia, you could spot some out there now.

The autonomous-mobiles will likely roll out in a series of stages, becoming less and less dependent on the human driver to participate. Considering humans are more prone than computers to falling asleep at the wheel, texting while driving, and road rage…the computers will probably do a better job of it. (Unless War Games is right, and the computers are out to get us.)

The reality of robot-driven cars is not just cool; it has the power to change lives in ways we never imagined. Transitioning all cars to autonomous models could save 300,000 lives a decade and dramatically reduce carbon emissions – perhaps as much as 90%! Pretty awesome. C3P0 can drive my Zipcar anytime.

Connected cars that communicate with each other could mean the end of the traffic jam. Image courtesy of HPE Matter.
3. IN SYNC: THE UTOPIA OF CONNECTED CARS

The advancement of driverless cars has benefits way beyond sitting in the backseat while reading the paper. Vehicles being able to communicate with each other and with sensors in roads could eventually lead to the dreamy scenario of total traffic synchronization. Picture a finely tuned symphony of vehicles flowing forward at reasonable speeds and never again having some num-nuts cut you off. Well, that’s the hope, anyway.

Researchers at Oak Ridge National Laboratory (ORNL) are developing new mathematical algorithms that will allow cars and infrastructure to talk to each other to reduce bottlenecks. According to those researchers, "if all vehicles are coordinated, they will never have to come to a full stop or a red light.” No more traffic jams? No more red lights. You just may faint. But it’s okay, because the robot’s got the wheel. 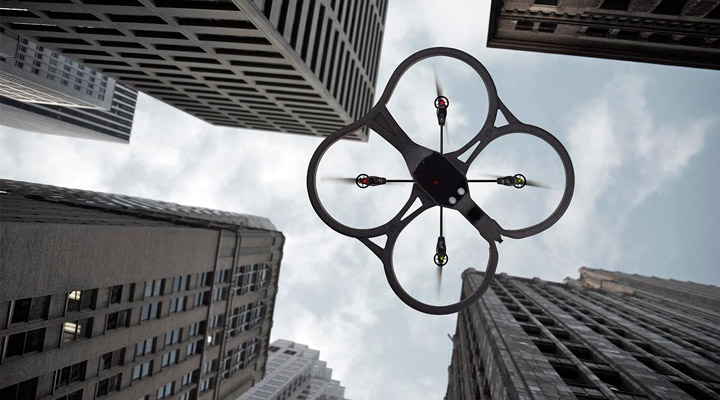 Duck! Your package is here! Flying drones will deliver packages and maybe even pizzas.

When we first saw the video of a flying drone dropping an Amazon package on a doorstep, it seemed more like a publicity stunt than a disruptive new delivery system. But as more companies (UPS, FedEx, Dominos) get in on the act, and the drone rises in popularity with the average Joe zooming them around just for fun, this high-flying vehicle is seeming more grounded.

The challenges come from an already crowded airspace, security concerns, plus the actual logistics of getting this all to work. (We’re pretty sure somebody’s gonna get bonked on the head by a pizza box before this is all over.) Once they work out the kinks, it could potentially prevent tons of delivery truck emissions, but experts predict it could be as long as ten years before drone home delivery becomes a typical thing. It may be a while before you hear: “Hang on a sec, Lucy. There’s a drone at my door.”

Cars that get 50+ miles to the gallon are already cruising the roads (efficiently). Image courtesy of Thinkstock, NithidPhoto.
5. OMG, CHECK OUT THOSE MPGs

Okay, so the end of gasoline-powered cars will be awesome…when it happens. But we have also seen smart changes to our ol’ buddy the gas-guzzling automobile to help cars work smarter, not harder. According to new EPA standards set in 2012, cars must reach 54.5 mpg by 2025. Sounds pretty intense, but the automotive industry has made huge strides in improving efficiency without turning to solely hybrid or electric engines. In fact, some cars are already reaching the required 2025 mileage today (a whole 10 years ahead of schedule). Somebody better give those engineers a raise!

The rise of hybrid and electric car purchases may also be a factor. But 95% of all new cars sold in North America today are gasoline-powered. So efficiency improvements there will go a long way toward curbing the harmful gases that contribute to climate change (and those poor fish swimming in the streets of Miami). The Paris climate talks indicated that America is on the right track. Smarter utilization of cars like, oh you know, car sharing, combined with new technologies that help cars perform more efficiently, is making a difference. We’ll have to keep the pedal to the metal to continue that trend. 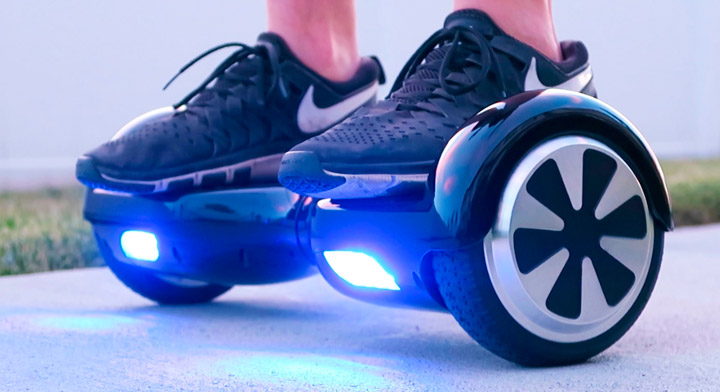 Catch some air with a real, live hoverboard. Image courtesy of Hoverboard Unboxing.
6. HOVERBOARDS - THEY'RE REAL

You know that super sweet hoverboard / skateboard Marty McFly rode in Back to the Future 2? It’s now available at an online retailer near you, and they’re pretty much the hottest gift of the 2015 holiday season. (Watch out Dancer and Prancer, Santa may be arriving by hoverboard this year.)

How does it work? Well, it’s designed as a self-balancing, two-wheeled, motorized scooter that uses innovative gyroscopic technology. What all that means is you can dazzle everyone in the grocery store parking lot with your ability to fly – or rather, hover – above the ground at a maximum speed of 12 mph.

Have you checked out Tony Hawk testing out his moves on this newfangled contraption? It’s pretty sweet. So if you’re ready to hover like Danny Glover, you can find one at a surprisingly reasonable price (relatively speaking). Around 400 bucks, which may be worth the look on everybody’s faces. 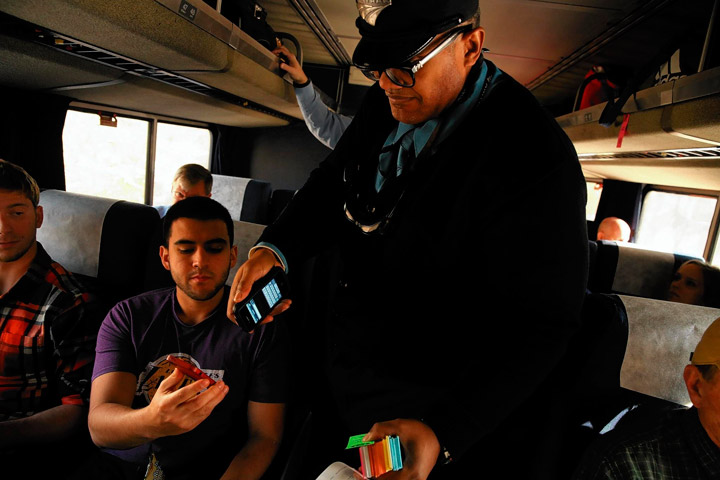 As population growth soars in cities, and both baby boomers and tech-savvy Millennials resist the suburban sprawl, a bigger burden is being placed on urban public transit. Anyone who takes a subway to work knows that the busiest areas see major congestion at rush hour and look like ghost towns the rest of the day. Figuring out how to put trains where the people are when they need them, is a problem only Big Data can solve.

For most cities, the primary funding source for transportation infrastructure is fuel taxes. As cars get ever more efficient and oil prices drop, the boon of fuel taxes aren’t what they used to be. That’s a good thing, but now that dough will need to come from somewhere new. Or, public transit will have to get a kick in the technological tush and become vastly more efficient, convenient, and sustainable.

The sharing economy will help some. With car sharing, ride sharing, and bike sharing all on the rise, people are finding ever more innovative ways of getting around. But an even more exciting development is the effort to coordinate infrastructure to work in harmony to provide, well, wheels when you want them. And buses, and subways, and trams. 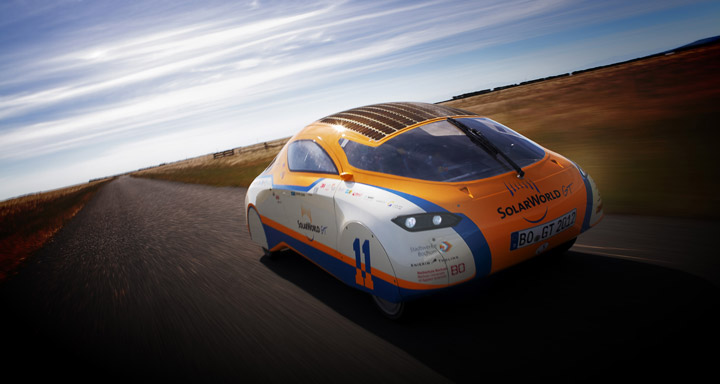 Solar powered cars: they’re not just for the desert. Image courtesy of SolarWorld.
8. THE RACE TO SOLAR POWER

In October 2015, seven futuristic solar cars raced across the Australian Outback in the World Solar Challenge. Netherlands won, but so did the idea of solar technology going the distance. The cars drove 1,900 miles in an admittedly super sunny area (the Australian desert), only allowed a nominal amount of stored energy to make the trip, getting the rest from the sun – or the kinetic energy recycled by the vehicle.

A friendly competition like this motivates the engineers coming up with this technology to test their designs in a real world environment. While solar panels on houses are becoming more and more commonplace, we doubt solar powered cars will have the same sudden adoption. In the meantime, they look seriously cool. 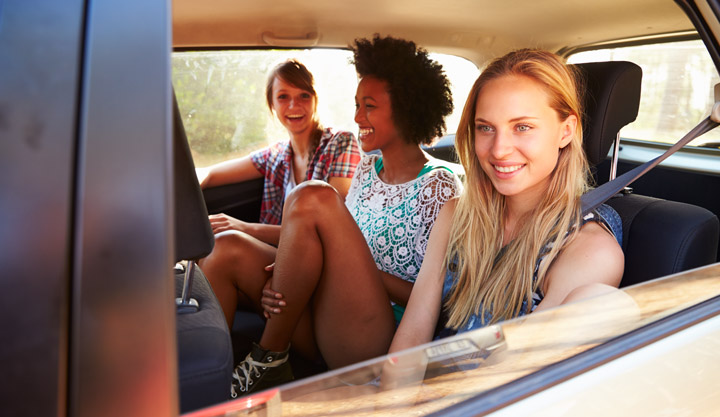 Hop in everybody! Ride sharing is getting cooler. Image courtesy of Thinkstock, monkeybusinessimages.

9. THE RISE OF RIDE SHARING

The concept of “carpooling” is as old as Fred Flintstone picking up Barney on the way to the rock quarry. It just makes sense. Instead of everyone driving their own car, let’s fill up the seats and make the most of the trip.

In the last decade or so, carpooling has taken on a rebrand and “ride sharing” is experiencing a new wave of popularity. The ease of grabbing a ride via mobile app has upended the taxi industry, forcing the traditional yellow cab that’s remained virtually unchanged for decades to get its 21st century act together.

The influx of everyday drivers picking up people via their personal cars brings up many controversial issues to do with insuring drivers, safeguarding passengers, and the fear of adding more traffic to already congested cities. It remains to be seen who will win out. Of course, one good disruption deserves another. Once Google puts ride sharing in its sites, anything goes!

Disrupting the disruption list is the Mars Rover, which in 2015 revealed signs of water on Mars. Image courtesy of NASA/JPL - Caltech.

Okay, kind of stretching the term “transportation,” but how else are you gonna get around on Mars? It’s not Matt Damon—at the wheel rovers are powered by code—but it’s certainly a major disruption to hear what it discovered. Hopefully you haven’t forgotten way back in April, when NASA announced they uncovered evidence that there may have once been water on Mars. Which does not equal (oh my god, there are aliens up there) but could possibly equal (whoa, there was once potentially living bacteria or something up there). Which in and of itself is pretty amazing. What it all means, we won’t know until further down the road. Of course, where we’re going, we don’t need roads…