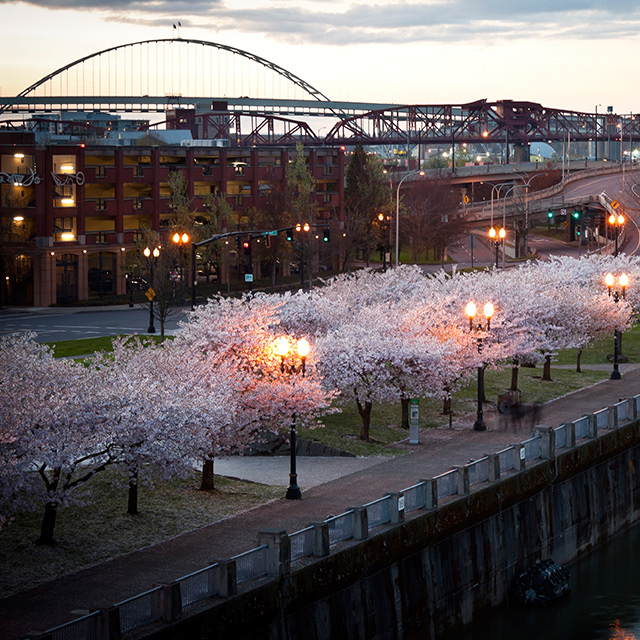 It’s no coincidence that Zipcars live in leading-edge cities. And as we work towards advances in technology, transportation, sustainability, and city living, so do the following locales. With 70% of the world’s population forecasted to be city dwellers by the year 2050, these leaders and innovators are increasingly critical players in the evolution of urban life. Here’s a peek at what makes them so uniquely revolutionary — and how you can benefit when you stop by.

Chicago’s streets have made way for cycling—with miles more to come. © Ciaran Griffin/Thinkstock

As a city renowned for its Lake Effect, Chicago might not seem a place you want to be outdoors, let alone outdoors on a bike. But with 200+ miles of bike-friendly streets, and Mayor Rahm Emanuel's serious commitment to bulking that up to 645 miles by the year 2020 (including some stretches with barrier-protected bike lanes), it's time to start the search for a winter-proof cycling outfit. Chicago bike sharing company Divvy is helping keep the bike lanes busy with 3,000 bicycles tucked at stations around the city, and even more installations planned for 2015. (Fun fact: Each station is solar-powered.) Groups like the Active Transportation Alliance help Chicagoans of all ability levels get in the game by sponsoring events (like Bike The Drive, which allows bicycles to take over the picturesque Lake Shore Drive) and providing family-friendly route ideas, so it’s only a matter of time before you find yourself on two wheels. (Perhaps even custom ones, from local shop Heritage Bicycles.)

Up your brain game in Boston, where dozens of colleges and universities abound. © Denis Tangney Jr/iStock/Thinkstock

In the midst of a Boston summer, when life slows down for lobster rolls and ball games, it can be hard to forget that once September 1st rolls around, school is back in session for a large part of the city. 50+ colleges and universities dot the landscape of Boston (and dozens more are a zip away in neighboring towns and cities) and having all those educational opportunities pays off: 44% of Boston residents hold at least a Bachelor’s degree. Turning education into innovative tech means that students are more likely to stick around the city post-graduation too, with companies like RunKeeper, HubSpot, Genzyme, Wayfair, Happier, LogMeIn, Akamai, and yes, Zipcar calling the Boston area home. Need to continue your own education? Not to worry – Boston-based companies like EF Education First (focused on language, academics, and cultural experience), and edX (offering online, interactive classes from schools like MIT and Harvard) are around to help keep you sharp.

New York’s the city that never sleeps—and with limitless nightlife (and ways to get there and back), you don’t need to, either. © stu99/iStock/Thinkstock

Between nightlife that never quits and public transit that’s open 24/7 to help you see every last bit of the city, New York City is the destination for adventurous night owls. When the urge to explore strikes, in addition to jumping on public transit or piling into a Zipcar, New Yorkers also have the option of spontaneous trips via CitiBike, NYC's bike sharing service. This means you’ll never be stranded any time of day or night, wherever your explorations take you. So treat yourself to a 2 a.m. jazz session at Fat Cat in the West Village, a thermo-stone massage at Juvenex in Koreatown, or a fluffy treat from Empire Biscuit in Alphabet City — your way-home choices have never been so plentiful.

To those who have visited the crown jewel of the PNW (that’s the Pacific Northwest, for those not in the know), it comes as no surprise that Seattle is the gold standard of sustainable city living. With compost, recycling, and landfill options standard on street corners and a new, city-wide ban on food and food waste being discarded carelessly, Seattle is serious about hitting their self-imposed commitment to recycle 60% of all waste. Seattle is also home to a 7-acre food forest housed on public land, and roadside rain gardens with plants that naturally help filter stormwater runoff. (With 35”+ of near-constant drizzle during the rainy season, that’s a lot of cleaned-up H2O.) With the city’s government and residents all embracing eco-friendly practices, the Emerald City is poised to develop even more mind-blowing (and earth-saving) solutions in years to come.

If you were in Minneapolis, you’d be reading this on free city Wi-Fi right now. © andipantz/iStock/Thinkstock

In an ultra-connected world, Minneapolis is setting a new standard with free, city-wide Wi-Fi. As one of the first cities in the nation to undertake a tech project of this magnitude, Minneapolis has leveled the playing field, ensuring that all residents (and tourists) have the opportunity to connect. With 117 hotspots and Community Technology Centers (i.e., friendly places with computers and internet access) scattered throughout Minneapolis, it’s only a matter of time before other cities follow suit, making this the new norm. (For those eager to jump online within the city limits, look for the wireless network connection called “USIW Free Wifi”.)

Denver’s one mile up, and tons of outdoor activities wide. © PeterPhoto/Thinkstock

With 6K+ acres of parks, 300+ athletic fields, oodles of rec centers, and enviable skiing, hiking, and biking just a short drive away (or even in the city itself, along waterways like the South Platte River), it’s no wonder that Denver leads the way for active living. Even the weather cooperates, with 300+ sunny days a year, giving residents zero excuses for skipping their morning run. An added bonus? With Denver a mile above sea level, your body produces more red blood cells, feeding more oxygen to muscles — making you even more of a rockstar athlete at lower elevations. Science!

You’ll find the epicenter of local and organic food deep in the heart of Texas: Austin. Home to Whole Foods, locally-sourced — and even organic food — is often the norm. Seeking an organic java fix? Food trucks like the Hot Rod Coffee Trailer and former-food-cart-turned-restaurant Odd Duck are your morning go-to. Add in a plethora of sources for local, raw milk — plus plenty of farmers markets (like urban, organic Boggy Creek Farm)—and it’s easy for Austinites to eat well without straying far from health or home. This ensures that the money residents spend in Austin stays in Austin, supporting the economy of local farmers, chefs, and their families who continue to keep Austin weird.

With its dedicated urban forestry program (complete with 300+ heritage trees), Portland, Oregon strikes a careful balance between the natural and urban worlds. The city has embraced its natural roots in quirky ways, like allowing up to three backyard chickens, ducks, or even goats without a permit — and bees too (with just a little extra paperwork). With Mount Hood visible as a constant reminder that nature is within reach (literally, with pint glasses from North Drinkware), Portland residents are careful to keep the City of Roses and its 40+ community gardens healthy and ever-expanding.