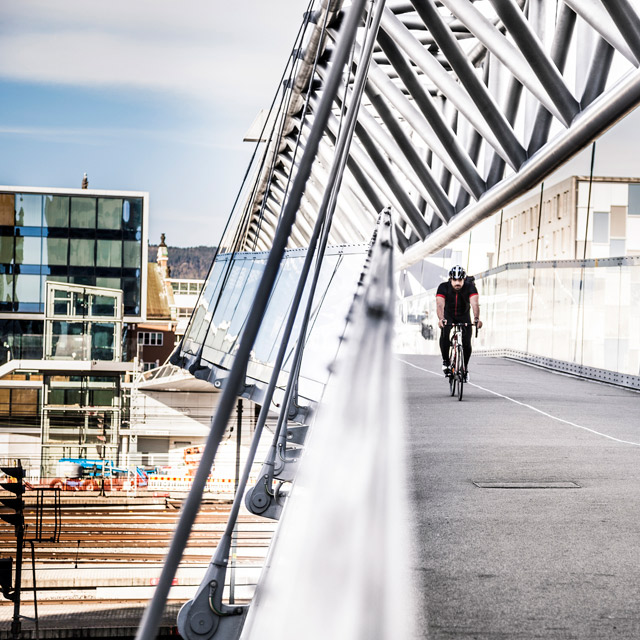 Inside the Car-Light Cities of the Future

Imagine a world where the roads were ruled by cyclists and pedestrians, not cars. Image courtesy of Alija/iStock.

“Imagine if streets were for strolling, intersections for playing, and cars were almost never allowed.” So writes journalist Winnie Hu in The New York Times, in a piece that examines how cities are increasingly going car-free. From Barcelona to Oslo, Paris to New York, some of the world’s most recognizable metropolises are now in the midst of dramatic urban planning overhauls that will open up streets to pedestrians and cyclists—and reduce the number of cars.

But it’s not automotive prejudice at work. Fact is, cutting down on the number of vehicles on the road doesn’t just address problems of pollution, noise, and public safety. It also means cities can foster community courtesy of new social spaces where parking lots and roadways used to be. And if it encourages urbanites to hoof it, use eco-friendly public transit, hop on their bicycles—and opt for car-sharing services like Zipcar when they do need a lift, all the better. Here’s your glimpse into the future of car-light cities, courtesy of four metropolises that are paving the way.

Barcelona is a world leader in car-free living. Image courtesy of Alija/iStock.

Barcelona may evoke images of Gaudi’s whimsical architecture and endless plates of tapas, but don’t forget that this Spanish city is also a world leader in all things car-free. That’s thanks to its innovative urban planning approach. One word: superblocks (or superilles, if you happen to be Catalan).

First developed in 1987, but only recently debuted, this system takes city blocks plotted along a grid system and expands them—up to nine square blocks may be clustered into one large “superblock.” Not only do these mini-neighborhoods foster community spirit, but given that cars can only chart their peripheries, they create large pockets of vehicle-free areas across the city, too. The mobility plan should cut pollution by 21% and free up a whopping 60% of streets for use as citizen spaces. Head to the city’s Eixample neighborhood for insight into this project-in-progress.

Paris is encouraging its citizens to go for that Sunday stroll with its car-free Sundays initiative. Image courtesy of espiegle/iStock.

What do you do if you’re one of the world’s most polluted cities? If you’re the City of Light, you tell cars to hit the highway (or at least get off the roads for a while). As part of its Paris Breathes campaign, the city has nominated the first Sunday of each month as a car-free day along major routes, including the famous Champs-Élysées.

That’s just the start: Mayor Anne Hidalgo’s mission is to eventually cut car space by 50%, including miles of quayside roadways on the city’s Right Bank. That move is made in tandem with expanded bike lanes and electric trams. And then there’s the Paris Sans Voiture campaign, which took place on October 1st of this year. For the first time ever, the entire French capital went car-free for one day.

Less traffic, more pedestrianized plazas is the aim for the future in NYC. Image coursety of tunart/iStock.

The French capital isn’t the only car-free city around. New York may be associated with its fleets of yellow taxis and chorus of honking cars at every intersection, but it’s still getting in on the empty-road action. On April 22nd—ya know, Earth Day—Car Free NYC saw large segments of Manhattan, the Bronx, Brooklyn, and Queens close the roads to traffic (Citi Bike, meanwhile, offered up gratis bike rides).

The Big Apple is taking a page from Barcelona’s book, too. Though its blocks haven’t been supersized yet, upwards of 50 pedestrian plazas have been built since 2007, with more on the way. Reclaimed areas include large swaths of Times Square, and will add up to 27 acres (that’s the equivalent of 20 football fields) in total. Not a bad start, NYC.

Oslo practices what it preaches when it comes to car-free living, turning parking spaces in pleasant public areas. Image courtesy of Ryhor Bruyeu/iStock.

Leave it to innovative Scandinavia to set the bar extra-high when it comes to all things car-free. The Norwegian capital’s ambitious plan hones in on its city center. The multi-stage urban planning mission has seen the government ban street parking spaces (and open up installations and public spaces in their place); next year, it’ll extend the pedestrian network, build 40 miles of bike lanes, and close several busy streets to traffic. And the coup de grace? A potential total car ban.

We want to reward everyone who’s making more room for greener spaces, bike lanes, and other things that aren’t cars by choosing to #ShareTheWheel with other ways of getting around the city. Tag @Zipcar with a unique story about why you #ShareTheWheel every day in your city for a chance to win a FREE Zipcar membership (or $150 in free driving if you’re already a Zipster), local bike share credit, a free subway pass, and a new pair of sneakers! Click here for full details.