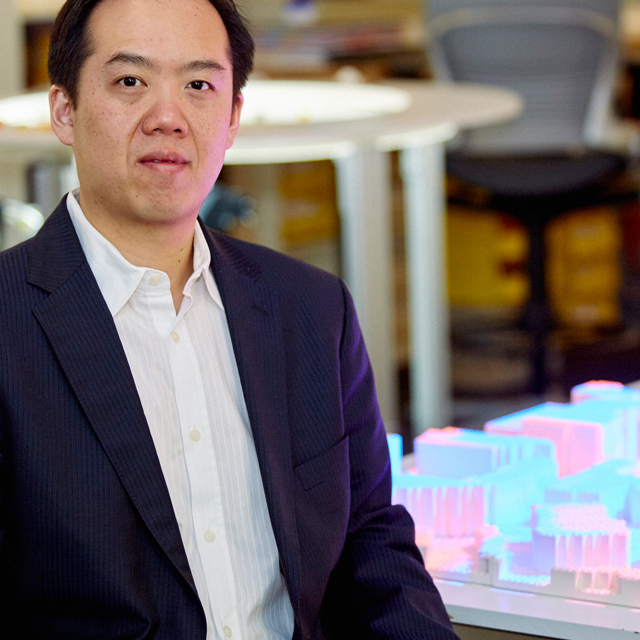 MIT is Redesigning Your City, One Lego at a Time

Remember when you didn’t have to circle the block for 30 minutes just to find a parking spot? Neither do we. Rising populations and growing numbers of people moving to urban centers are resulting in crowded cities, both on the streets and in residential areas. How do we fix it? It’s no small feat, but if there’s one place that’s up for the job, it’s the MIT Media Lab.

The initiative’s mission statement leaves no room for the status quo, declaring instead that “fundamentally new strategies must be found for creating the places where people live and work, and the mobility systems that connect these places.” Tough love for those that would prefer to keep their two-car garages.

LIFE IN THE LAB

Ryan Chin, Managing Director of the City Science Initiative, is at the head of some revolutionary work that directly affects modern cities like Singapore and Boston, most notably in transportation. Taking a walk through the Changing Cities lab with Ryan is like being in a kid’s playroom (if that kid were a super-genius with ideas that are changing the world). Drawers of Legos in all shapes and sizes create a barrier through the middle of the room, next to several models of cities, both real and theoretical. Two projectors shine lights onto a small-scale replica of Kendall Square, the area of Cambridge that surrounds MIT, with the color scheme changing every five seconds. At first, the patterns represent a map of different mobility options—pink is for Zipcar spots, green for Hubway bike locations—and next, the lights change to show Twitter activity in the area, then wind patterns. It’s not just for show—it’s a visual display of high-level thinking around the many factors of urban design.

They may look like drawers of toys, but these Legos could be the building blocks of your city’s future.

I ask Ryan about their work process. With such a monumental challenge ahead, how do you start? Imagination, of course. “We do ‘what if’s’ all the time,” he says. “We have to start off with that from an academic, theoretical, blue-sky point of view.” That doesn’t mean he has free reign to decide that all cities should suddenly switch exclusively to flying cars. “We’re not just in fantasy world all the time…for our projects to be funded, they have to be grounded somewhat in reality.”

One of his most successful projects is the compact, electric CityCar, known commercially as Hiriko. It started in 1999, not as a task to create a concept car, but as a prompt to improve cities through mobility systems. “It wasn’t about designing a car,” he recalls. So what do you get when you combine MIT researchers, architect Frank Gehry, and a major car company? A two-seater electric car that folds up on command (you can fit three and a half in a standard parking space). While the car has yet to hit the mainstream market, the initiative has undoubtedly created ripples in the urban design world and ignited ideas for future innovation on the streets, including the new designs of self-driving wheels.

We hear a lot of talk about autonomous cars, but are they really going to become common in our lifetime? While it can seem seriously Jetsons-y to imagine self-driving vehicles zooming around cities, Ryan brings up some equally innovative concepts that have already caught on. When he started work on CityCar fifteen years ago, car manufacturers thought electric vehicles were crazy. Now? Almost every company has one. Same goes for car sharing. (Hey, we can think of one that started in 2000).

A digital rendering of the compact, electric CityCar that could redefine the streets. MIT Media Lab CityCar Concept: Image by William Lark, Jr.

MAKING THE DREAM A REALITY

The next question is how autonomous cars will fit into society. Most people imagine having one of their own, but Ryan thinks of them more as a step between public transit and private cars. While their lack of human fallibility will allow the cars to operate more swiftly on the roads, efficiency is not the primary end goal. “There’s only so much optimization you can do,” he says. “At some point, you have to take the next step and say, well, maybe we need to get people out of automobiles.”

There are still obstacles to clear and trails to blaze, but we can be certain that Ryan and his Lego-wielding team are making serious strides. By partnering with cities as living labs—such as a current collaboration with Boston and bike-sharing company Hubway—the City Science Initiative will continue harnessing the power of technology to shape the cities of tomorrow. What will it look like? A focus on the data-driven city and the creation of new systems that improve or disrupt the existing structure. It’s all in a day’s work, according to Ryan: “The Media Lab invents the future.”