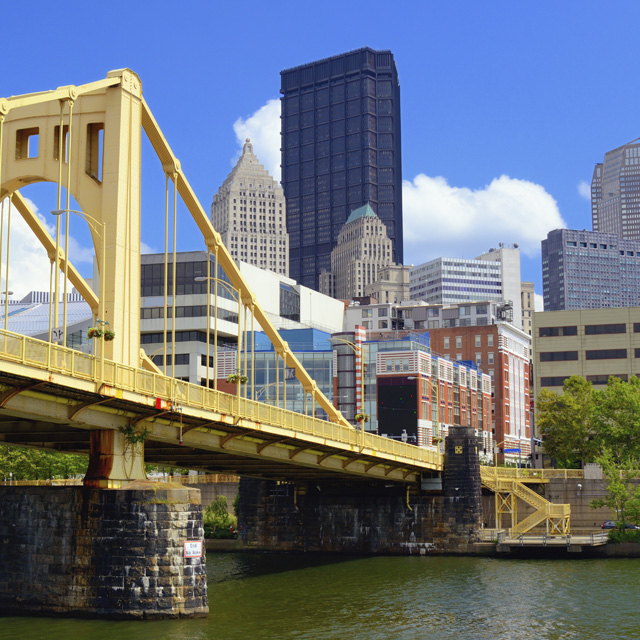 How Once Gritty, Industrial Pittsburgh is Leading a Renaissance of Reuse

Mention “Pittsburgh” to those only familiar with its old reputation, and face lines are bound to frown. Iron City. Steel City. Pittsburgh’s nicknames are strong, but not pretty. Historically, mills loomed, capitalizing on the confluence of three rivers, and smokestacks spewed day and night. The whistle whine of locomotives hauling freight cars pounded off the hills like an industrial symphony.

You know the saying, “There’s nothing 400 cans of oven cleaner can’t fix”? Yeah, neither did we. Until we learned about the Pittsburgh & Lake Erie Railroad Terminal Building.

Factories and warehouses still populate the riverbanks, but urban renewal —fueled by artistic initiatives and gastronomic growth starting in the 1970s — is turning Pittsburgh into a laidback post-industrial playground.

GRAND PLANS FOR THE LITTLE GIANT

By the 1970s, automobiles and airplanes had siphoned away customers. P&LE remained solvent thanks to its freight business, but the Terminal Building was almost deserted, falling into disrepair, and in danger of demolition.

Luckily, the Pittsburgh History & Landmarks Foundation intervened in 1976 with a plan to lease the entire 40-acre train yard complex. The site was rebranded Station Square, and major renovations were made. Even the stained glass, unwashed since installation in 1900, was brought back to its original splendor after three months — and 400 cans of oven cleaner.

Where people used to wait for trains, they now hungrily await fine dining at the aptly-named Grand Concourse Restaurant.

While wrecking balls demolished most monuments from Pittsburgh’s passenger rail heyday, the Grand Concourse —the crown jewel of the P&LE system —was spared. This opulent passenger waiting room has dazzling decorative touches that continue to beautify this neo-Baroque interior. A restauranteur opened Pittsburgh’s largest fine dining establishment inside, the white-tableclothed (and fittingly named) Grand Concourse Restaurant.

To make the transformation, an outside walkway was enclosed in glass to expand usable space and reward diners with river and skyline views. The old baggage room was converted into a casual eatery and bar. And the adjacent freight train shed is now a retail and restaurant complex, with the open-air Bessemer Court studded with steel-making artifacts, like an early blast furnace, to remind visitors of Pittsburgh’s past.

Rising behind Station Square, the Monongahela Incline has been running cable cars up and down Mt. Washington since 1870, when it was known as Coal Hill. The incline is the oldest continually operating funicular railway in the country, and observation decks on the mountain offer unmatched river valley panoramas.

Across town, St. John the Baptist Church opened in 1903 at the height of Irish and Scottish immigration. The working-class neighborhood of Lawrenceville was booming from industrial expansion, and existing parishes could no longer accommodate the influx of Catholic worshippers.

After 90 years as St. John the Baptist Church, the building traded pews for brews to become Church Brew Works.

Father Edward J. McKeever purchased this hillside property to build a church, convent, and school defined by early Italian Renaissance architecture. Starting in the late ’50s, however, the closing of nearby steel mills and glass factories caused the congregation to dwindle. In 1993, the church closed and the parish consolidated. Three years later, a happy, hoppy resurrection transpired when the new tenants, Church Brew Works, began pouring pints.

The innovative brew pub’s reuse is faithful to its predecessor. Douglas fir floors have been restored; oak salvaged from pews built the bar; and lanterns adorning the nave shine brightly once again. A former confessional is a repurposed merchandise store.

While not everything at Church Brew Works has been refurbished (a bartender noted that about $60,000 is needed to repair the balcony pipe organ, which would be one helluva way to announce happy hour), the brew pub earned an Award of Merit for adaptive reuse from the Pittsburgh History & Landmarks Foundation, and continues to garner accolades for its signature cold ones.

THE ART OF REUSE

A quick walk over the Andy Warhol Bridge from downtown Pittsburgh leads you to the first museum devoted entirely to the work of an American artist of the postwar generation.

It cost more than a few Campbell soup cans to turn the Frick & Lindsay Warehouse into the record-breaking Andy Warhol Museum, which sees over 100,000 visitors every year.

Pittsburgh born, bred, and educated, Warhol became one of America’s most influential and iconic contemporary artists. The museum in his honor showcases 8,000 of his paintings, sculptures, and other oeuvres, making it the most comprehensive single-artist museum in the world.

Frick & Lindsay Co. built the original warehouse — a cream-colored building clad in terra cotta — in 1911 as a distribution center for mills and mines, to whom they sold supplies. They later sold the property to Volkwein’s Music & Instruments Company, a family-run business that has distributed sheet music and sold and repaired instruments since 1888.

Around the time of Warhol’s death in 1987, the Volkweins were looking to move. The Carnegie Institute, which had designs on the Frick & Lindsay building for a future Warhol museum, suddenly found it off the market. Allegheny General Hospital had the first option to buy, but a Carnegie trustee (who was also the chairman of the hospital’s board) persuaded the hospital to withdraw its bid.

The drama didn’t end there. The Volkweins didn’t want Carnegie’s cash. They sought to trade their building for one that better suited their needs. Undeterred, and having no such property to offer, the Carnegie Institute paid a developer to custom build.

From miners, to musicians, to Marilyn, this warehouse lobby has seen many faces throughout the years. | The Andy Warhol Museum, Pittsburgh, lobby, © Abby Warhola

Once completed — and an impressive collection amassed — the Andy Warhol Museum opened in 1994. Warhol, a master at repurposing commercial themes and injecting mass-produced techniques into his art, would have been proud of the result and the record of adaptive reuse in his hometown.

If you like this, check out the rest of our series: Changing City Landscapes. We’re chronicling elegant examples of urban adaptive reuse, where cities like New York and Seattle transform dated structures into valuable community spaces.