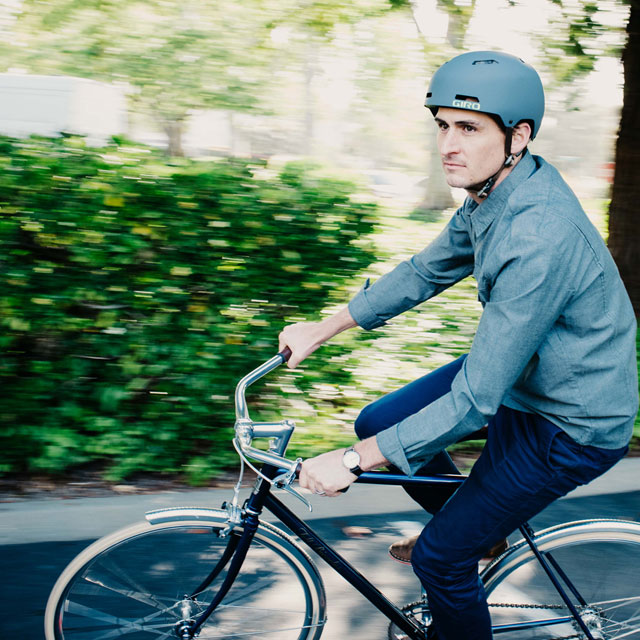 Folding Helmets and Integrated GPS: The Future of Bike Commuting is Here

You might think biking to work is a breeze—just hop on and go. But not so fast, there, tiger. In order to earn the title of ultimate bike commuter, the following tips, tricks, and pieces of gear are what’s gonna take your game to the next level. From ingenious ways to carry breakfast on the go, to work-friendly bike clothes and smart cycle tech, this is your revamped morning routine.

For short-term rentals and an easy way to test multiple types of bikes, try Spinlister. Image courtesy of Spinlister.

Some of us have been biking to work for years. Others might be brand new to commuting via two wheels. If you don’t yet have anything to pedal, no sweat (figuratively)—you can try before you buy.

Enter Spinlister, often described as “the Airbnb for bikes.” This sharing economy site lets you search available bikes near you, from fixies to mountain bikes and everything in between. And then there’s city-sponsored bike sharing, if you’re lucky enough to live in one of these 60+ locales. Accessible, affordable, and eco-friendly: there’s a whole lot to like about that.

The brain power of the COBI keeps you connected and protected. Image courtesy of COBI.

Problem: Biking and consulting a map are pretty much impossible to do simultaneously. (Keep your eyes on the road!) Solution: Meet the Hammerhead. This smart tool hooks to your handlebars and guides you via light signals, all while your phone remains safely stowed away, out of sight.

And for futuristic-level smarts, there’s the new COBI. This integrated system connects with your phone, and does everything from GPS navigation to fitness tracking, while also playing music and making your lights and other bike accessories “smart.” That’s some all-in-one commuting goodness right there.

HELP YOURSELF TO A HELMET

Swap out a landfill-everlasting Styrofoam helmet for a biodegradable (and equally safe) Giro. Image courtesy of Giro.

Any pro bike commuter knows that next to your ride itself, a good helmet is your absolute-most important piece of equipment. But that doesn’t mean you have to tote around something big and bulky. You could opt for a helmet that inflates, airbag-style, in case of collisions. Or a helmet that folds. Or even one that’s compostable (bonus points awarded for being green).

Suit up in Betabrand pants that are moisture-wicking and office-appropriate. Image courtesy of Betabrand.

We’re not all lucky enough to have in-office showers (and we’re not all confident enough to rock the all-Lycra look). Luckily, a number of manufacturers are making clothing that transfers seamlessly from the bike lane to the office. Like Cogma’s pieces, which look like fitted plaid shirts, but are totally commute-friendly, thanks to extra stretch, mesh vents, and other design flourishes.

And don’t forget about your pants. (Mud-splattered cuffs are never a good look.) Luckily, Betabrand’s got it sorted, with its bike-to-work britches and skinny jeans. Available for men and women, their bottoms are water-repellent, subtly stretchy, feature reflective details, and have hidden interior pockets. All the latest in pants technology, in other words.

The lock is in the bike. Yerka models contain their own security features. Image courtesy of Yerka.

Nothing is a bigger bummer for the bike commuter than when their ride does a disappearing act. But today’s bike technology is fighting back against thieves. A smart lock is one way to ensure your bike stays put, and Skylock is one of the best. The nifty new device connects to your phone, and sends you alerts when it detects theft attempts.

Alternatively, you could just buy a bike that locks itself up. No, really: the ergonomic Yerka, created by a team of Chilean inventors, has a lock system integrated into the bike itself. While thieves could take their tools to it, that would mean destroying the bike. Kinda counter-productive, that.

Between crisp air and caffeine, your cycling commute will wake you right up. Image courtesy of publicbikes.com.

Last, but certainly not least: breakfast. Your commuting game isn’t on point if you’re hitting the road sans fuel. Apart from a bulky basket or backpack, bike commuters might have struggled to take their morning meal to go in the past. But now, there are genius inventions like the banana holder, which snaps around your frame and carries your banana along in its own cheery sling. Add in a sleek coffee holder to keep your fresh brew secure, and you’re basically the ruler of the morning commute. Bow down.