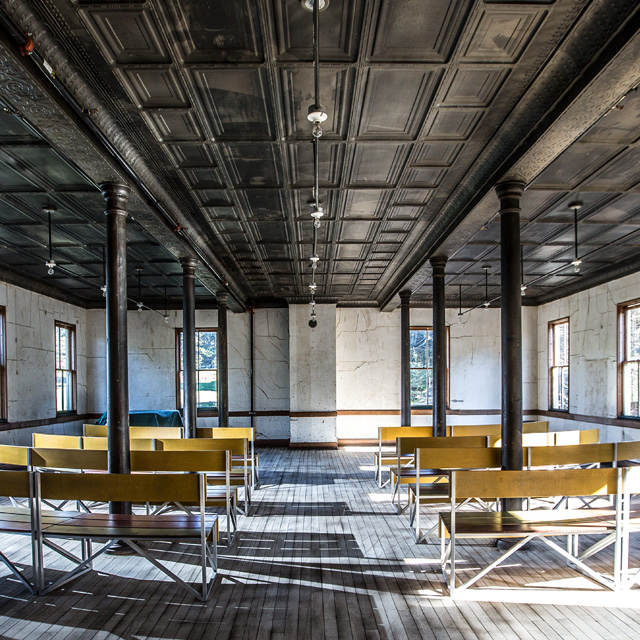 San Francisco is a city that embraces change. Starting as a bustling Gold Rush town, it adapted when the 1906 earthquake struck, initiating a massive rebuilding campaign that cemented its place as a center of Victorian-Edwardian architecture. It next reshaped itself into a focal point for the hippie movement of the 1960s, and then into the epicenter of the tech world we know today.

Despite its evolution, the City by the Bay has held tight to its roots, largely in its historic buildings. In 1964, San Francisco became the first city to undergo an adaptive reuse project, transforming the former home of the Ghirardelli Chocolate Factory into mixed-use project, Ghirardelli Square.

Here, we explore a few of the Bay Area’s most impressive adaptive reuse projects that are worth a visit.

Though the signature sign remains, bustling Ghirardelli Square is now a far cry from a turn-of-the-century chocolate factory.

Chocolatier Domenico Ghirardelli was born in the early 1800s and grew up in Italy, relocating to San Francisco in the late 1840s to open up shop. In 1923, Ghirardelli put up a massive light bulb sign (the same one that stands today). But in the 1960s, the chocolate company was sold and the factory abandoned. It was then that the city of San Francisco decided to transform what was once a 100,394-square-foot factory (no word if it at all resembled Willy Wonka’s famous space) into a tourism center for shops and restaurants. In November 1964, Ghirardelli Square opened to the public, delighting both chocoholics and non-chocoholics alike.

Today, the Square attracts around 20,000 people per day with nearly a dozen specialty boutiques, several restaurants, and even an ice cream shop that sells Ghirardelli Chocolate. (Pro tip: Make sure to check out the historic machinery near the back stairs for a tasty blast from the past.)

Aviators prepare for flight in 1921; today, anyone can reach for the skies in the trampoline-happy House of Air. Photo courtesy of Ethan Kaplan Photography.

Bordering Crissy Field is a large building with a retractable glass door that is often opened to let in the breeze. Inside you will find House of Air, an aptly-named trampoline park open year-round that’s an equal favorite for both children’s groups and corporate gatherings. (A distinction we’re pretty sure few places can claim.)

Although the concept is modern, nearly every aspect of the location is steeped in history. House of Air sits within the Presidio, a 300-acre park in the northwestern corner of the city that served as a post for the U.S. Army from 1846 to 1994. Crissy Field, a massive field where people now fly kites and bike around its perimeter, was Crissy Army Airfield from 1921 to 1936. And today’s House of Air site was once an airplane hangar facility, renovated and reopened in 2010. We recommend stopping by to admire the peaceful outdoor surroundings — and then heading inside to jump around like crazy.

The former Ford Assembly Plant was revived as the Craneway Pavilion, a 45,000-square-foot facility that sustainably blends indoor and outdoor spaces — including a one-megawatt rooftop solar power plant. Photo courtesy of Craneway Pavilion.

In 1930, Ford Motor Company built a manufacturing facility on the shores of the San Francisco Bay in the town of Richmond. The plant operated until World War II, when it was converted to assemble tanks and jeeps for the military effort. Ford again manufactured cars there after the war, but left the property in 1955.

The building sat vacant for years. Wanting to revitalize the site and add commerce and positive energy into crime-ridden Richmond, Eddie Orton of Orton Development brokered a deal to purchase the building in 2004, then rehabbed it and opened it to the public as Ford Point in 2009.

Ford Point is now home to Rosie the Riveter/WWII Home Front National Historical Park (and visitors center), restaurants, businesses, and Craneway Pavilion, a concert venue. Just as cars (and car sharing) have come a long way since the early Ford days, so too has the contemporary community center in his name.

HEADLANDS CENTER FOR THE ARTS

Just north of San Francisco sits a collection of nine buildings on the 2,100 acres of hills, cliffs, coves, and beaches that comprise the Golden Gate National Recreation Area — one of the largest urban parks in the world.

But in its early days, the site had a different, less leisurely purpose. Erected by the U.S. military between 1907 and 1913, the buildings served as hubs of operations to ward off potential West Coast invasions until 1950, when the military vacated.

In 1972, the buildings were reclaimed by the National Park Service to be developed into the Headlands Center for the Arts. Just 15 minutes from San Francisco, Headlands hosts artists in residence, provides accessible programs where local artists can rent space, and offers a robust residency alumni program. Open to the public five days a week, the center also hosts three open houses each year, so visitors can meet with the artists face-to-face. (And, with the area’s rich biodiversity, visitors can also spy owls, deer, wild turkeys, seals, butterflies, and various other species.)

The personal — and natural — approach has proven a vital component of the transformation. “People love coming to see the renovation of the building,” says Vanessa Kauffman, communications and outreach manager at the center. “You can feel the creative energy here.”

If you like this, check out the rest of our series: Changing City Landscapes. We’re chronicling elegant examples of urban adaptive reuse, where cities like New York and Pittsburgh transform dated structures into valuable community spaces.