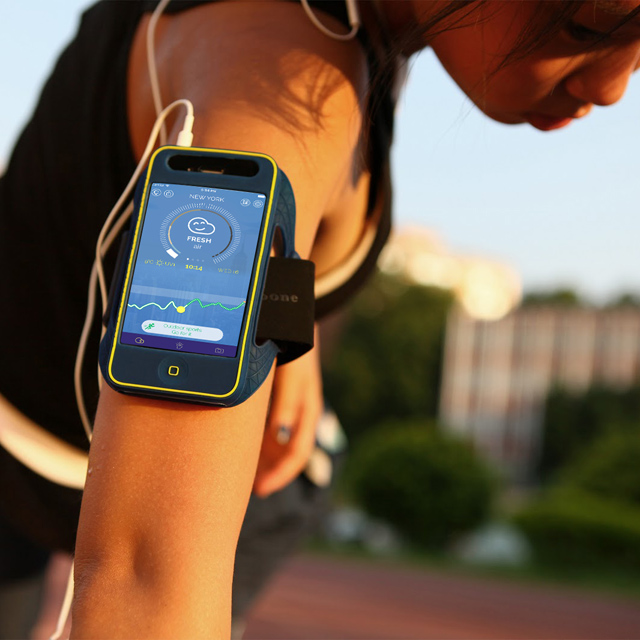 First, the bad news: a recent report by the World Health Organization (WHO) found that a staggering 92% of people around the world are breathing polluted air. As the WHO rightly points out, “air pollution affects all regions, settings, socio-economic groups and age groups.”

But there is a ray of hope. Around the world, cities are getting savvier about fighting back against air pollution, and consumers also have access to tech, apps, and other tools to combat pollution more than ever before. Read on to learn more about ways you can breathe easier — and encourage your city to do its part, too.

Like a Fitbit for the environment, TZOA keeps you in the know about the world around you. Image courtesy of TZOA.

Wearable technology is helpful when it tracks your REM cycles or daily steps — but it’s even more essential in the fight against urban air pollution. Just look to products like TZOA: billed as the world’s most advanced enviro-tracker, it measures air quality, temperature, atmospheric pressure and more. Connect it to your smartphone and, using crowd-sourced data, it generates live maps of environmental data (and gives personal recommendations about how to skirt around local pollution hotspots).

Go with the Flow and get personalized alerts about the air quality in your city. Image courtesy of Plume Labs.

Then there’s the AirBeam, which along with its companion AirCasting’s open-source platform, collects, displays, and shares environmental data, all with the aim of making the “invisible” problem of air pollution accessible to the public. Clarity (a low-cost small particulate matter sensor) and Flow (a new air tracker from Plume Labs, which monitors air quality indoors and out and sends you tailored alerts) are two more names to know in the wearable game.

With new pollution apps, you won’t even have to peek outside to check out the smog in your city.

Beyond investing in a wearable device of your own, a range of other apps aim to make checking your city’s pollution levels as simple as looking up the weather forecast each morning.

AirForU, developed by researchers at UCLA’s Institute of the Environment and Sustainability, provides real-time air quality updates nationwide. Another app, Air Matters, provides data from more than 10,000 monitoring stations across 50 countries (and tracks both pollen and pollution levels, too).

A scarf that lets you bundle up and block pollution, all-in-one. Image courtesy of Wair.

Of course, it’s one thing to track pollution — but when you leave your house, hop on your bike, or otherwise get around town, how can you breathe cleaner air?

Designers are coming up with a number of solutions to that question. One example is Wair, a French start-up whose anti-pollution scarf filters out 99% of rogue particles (and comes in all kinds of stylish prints).

A less chic, but equally smart option is the new Airdog FitAir, which made its debut at the Consumer Electronics Show in Las Vegas at the beginning of the year. The mask is ideal for urban bicyclists and joggers who are particularly susceptible to breathing in toxic fumes; the air purifier is portable, lightweight, and straps to your arm (it can also be detached and used as a desktop purifier, too).

Artists are also being tapped for creative, anti-pollution solutions. The Human Sensor project by Kasia Molga envisions a beautiful, wearable construction with a special function. The piece changes color when it detects pollution, for a compelling — and awareness-raising — visual effect.

Bikes outnumber people in the city of Copenhagen.

Beyond individual efforts, though, what are cities doing to combat pervasive urban air pollution?

It depends on where you look. Around the world, urban hubs are expanding pedestrianized areas (Oslo is proposing a new no-car zone), encouraging bike commuting (Copenhagen now has more bikes than people), and even designing buildings made from concrete that suck up smog from the atmosphere (Mexico City and Milan are trying out this futuristic technology).

And then there’s car sharing. Not to toot our own horn too loudly, but we’re proud to offer hybrid and electric vehicles for use by our Zipsters. After all, the more we pitch in to create change, the sooner we’ll all be breathing easy.