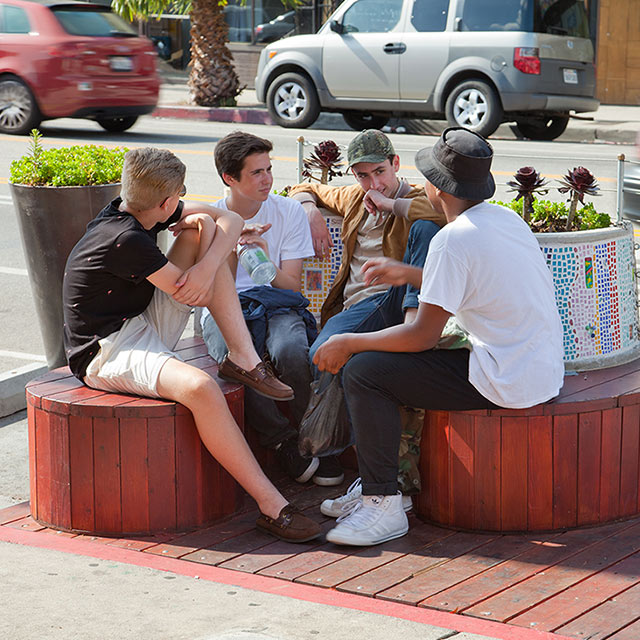 We Can’t Curb Our Enthusiasm for These Tiny Parklets

Pull up a chair, arrange your umbrella just how you like it, settle in with some Sudoku or a library book, and take in the city around you. You're not on your front patio or in the local coffee shop. You're "parked" among a flourish of plantings on a bustling street corner in a spot that may have once held only a parking meter and some broken-up concrete.

If you haven't yet seen a "parklet" in person, odds are that you'll happen upon one soon enough. With their beginnings tracing back to one San Francisco design firm's idea in 2005, parklets hit the east coast in 2010 and are now dotting the land in between. Today, San Francisco alone boasts over 60.

These parklets, often just a converted parking space, idle traffic island, or unused corner of concrete, are slices of city blocks transformed. A typical example might hold a movable table and bench and an array of plantings. Small but important, they are a community gathering place, adding beauty and nature to the concrete jungle, and keeping our eyes on the prize of a greener future.

This Seattle parklet, sponsored by Molly Moon’s ice cream, is the perfect place to enjoy a scoop of vegan chocolate chunk. © Strata Architects

Beyond the fundamental goodness of greenspace

In describing what makes public spaces work in her popular TED Talk, Amanda Burden, former City Commissioner of New York, reflects on our essential need for greenery. She says that beyond the beauty of a canopy of trees overhead, we need to "feel greenery at the ground plain, so you feel in a healthy environment."

If the environmental upside of a living green garden over blacktop is a given, people are finding that parklets also build a sense of community as people gather in — and care for — spaces that in the past sat empty or held yet another parked car.

"If you create a public space that people want to be in, you can actually change the value of that space," says Burden, encouraging city planners to think of cities not as collections of buildings and skyscrapers, but as the people within.

"Public spaces are the glue that holds cities together."

A change in mindset for businesses, too

"Taking five minutes to sit around in greenery just helps put your mind at ease, you know?" says Washington, DC, stylist Ana Santanello, speaking to a reporter for NPR about the parklet near her salon.

That's precisely why communities like San Luis Obispo, who've taken parklets for a test drive, have found an overwhelmingly positive response. After a trial run last March, residents there have been clamoring for more spaces, and the city had to establish guidelines for how the spaces could look and function.

The Spring Street parklet is a sign of Downtown LA’s renaissance. © LADOT/Jim Simmons

As cities work to support and coordinate the parklet process, it is, at least in part, the very flexibility of the idea that makes it work. Parklets can be seasonal or semi-permanent, can work in oddly shaped spaces of almost any size, and can feature moveable, modular furniture and planters. That adaptability— not just where a parklet is located, but the way a community can build variations on it — is a key factor of their success.

We have to thank San Francisco for giving us mini-parks like this one, designed by INTERSTICE Architects. © Wells Campbell

These parks in miniature represent real collaboration, so that the process of creating and refining parklets itself builds community. All over the country, various individuals, small business owners, and community groups have pitched in to conceive, design, fund, maintain and even house parklet components in the off-season.

The team effort means people feel invested and enthusiastic, and the enthusiasm is contagious. The success and popularity of these tiny parklets demonstrates in a very big way that the commitment to green space is growing across the country — a country that is looking toward a future of replacing parked cars with parks and unkempt concrete with greenspace. And that is good news for all of us.

This Paris mini-park is petite, but could inspire a masterpiece called “Repose by the Seine.” © The Hip Paris blog/Didier Gauducheau