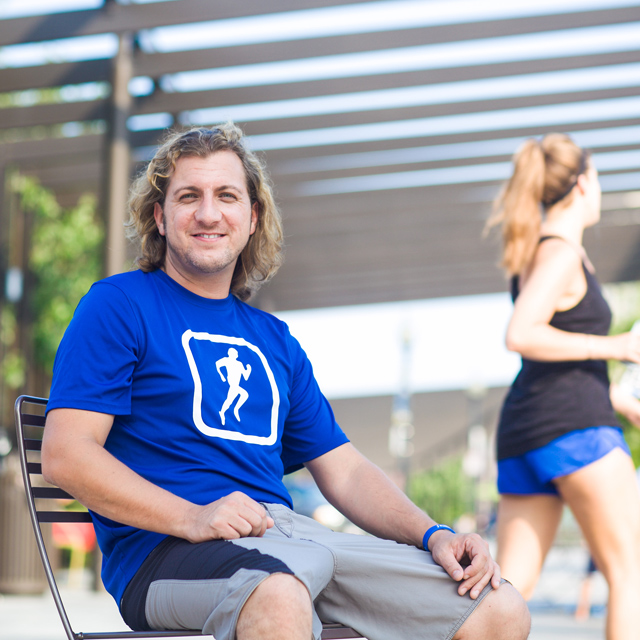 While running is a solitary sport, runners can be quite the communal bunch. From jogging clubs to chilly morning high-fives, road warriors love to support each other. Whether you’re working towards a personal record or tackling your first 5K, an uplifting community makes it easier to strap on those sneakers and go.

Pairing that spirit with data is RunKeeper, the fitness tracking app that makes it easy to share and track your runs, cheer on your friends, and keep improving. With the recent release of their new daily activity tracker, Breeze, Zipcar chatted with co-founder Joe Bondi on how our phones not only keep us connected, but motivate us to move.

The man behind the machine (well, the app on the machine): RunKeeper co-founder Joe Bondi.

Zipcar: How did you come up with the idea for RunKeeper?

Joe: It was a fusion of what was happening at the time. I met Jason [Jacobs, CEO] in 2008. He had the vision for an online fitness community with tools for training. That year, Apple was releasing the App Store, and it came out that all the newest smartphones would have GPS capabilities. While there were fitness products out there that had tracking, our idea was to bring it to your phone, an everyday device you already had on you. Though technologies are constantly changing, our mission stays the same: to give people the tools to be more active with the devices they already have.

Have you worked on apps in the past?

At my former job, I was adding GPS technology to products and applications. One was a parachute delivery system that landed supplies for troops, and the parachute was able to guide itself to the target. We added that next layer of intelligence to products, and we are doing the same with RunKeeper by connecting to wearable and gym devices, recommending the next training plan, letting the user access the kind of data that improves their lives.

How do you select the experts?

That’s where our partnership and product teams come in. Some approach us, some we research to find the best out there. All of the goal-based training plans are designed by experts who have a lot of coaching experience.

How has RunKeeper changed your personal fitness habits?

I did run cross country in high school, but I’m definitely not running any marathons. I’m part of the group that needs more motivation and fun to do something. I’m out walking, biking, and being more active than I was before. With the app, if you’re posting a run for all to see, it inspires you to do more.

How has technology like smartphones changed the way we move and learn about ourselves?

It’s a more comprehensive, complete, and mobile platform than anything we’ve had before. Something as difficult to measure and track in the past like outdoor running can easily be quantified with one tool. The usability and connectedness are key; it’s not one product for one specific task. It goes beyond that. With apps that can integrate together, there’s no limit to what we can learn or quantify.

Were you expecting this level of popularity?

You don’t expect it, but it’s something you’re working toward. That doesn’t take away the surprise when you hit milestones: 1 million people, 5 million people. It kind of boggles the mind. But the app stores get crowded really quickly, so your app needs to keep delivering and improving. We update, we release new apps, we become more intuitive.

What kind of testimonials have you heard in response to users testing RunKeeper? Have there been any celebrity users?

Montell Jordan (of “This Is How We Do It” fame), we’ve tweeted back and forth. He’s gotten into running and uses the app so that’s been great for a group of people who mostly grew up in the ‘90s.

If you check out our Fitness Freak Friday posts on the blog, there are a lot of amazing stories that will give you chills. People write in who have faced dire health situations and then lose hundreds of pounds, quit smoking, et cetera, all using running, walking, and cycling to get back on track.

What kind of community has developed around RunKeeper, both online and off?

It’s definitely a highly passionate user base, that’s for sure. There’s a social component, so even if you’re not the type of person who likes to log and track everything, posting a few runs a week on Facebook can really help motivate. We see it—the more social you are in the app, the more active you end up being. Plus, our community team does fun events like Race the Green Line (editor’s note: RunKeeper won the race!) and Sunday Runday.

How does RunKeeper’s interface connect with city life?

We want to do more events, like Race the Green Line, where we connect directly with the city. Boston, Cambridge, and the surrounding areas are awesome places for walking and cycling, so there’s a lot we can play off there.

How does RunKeeper connect in other cities?

We have an ambassador program that is team-run. About two-thirds of RunKeeper users are outside the U.S., which is amazing. We translate into 12 languages now and ambassadors organize group runs and spread the word.

What’s next for RunKeeper?

We’re ready to adapt to the next generation of wearable technology, whatever comes out from Androidwear, Apple, and others. Our goal is to make the process of planning, doing, and tracking your activity as seamless as possible. We hope to stay on the forefront of connecting to peripheral devices and apps, so whether you’re at the gym or using a food-tracking app, you can find out, “what are people like me doing to lose weight or improve their pace?” We want that data working for the users so they can increase success rates and reach their goals.