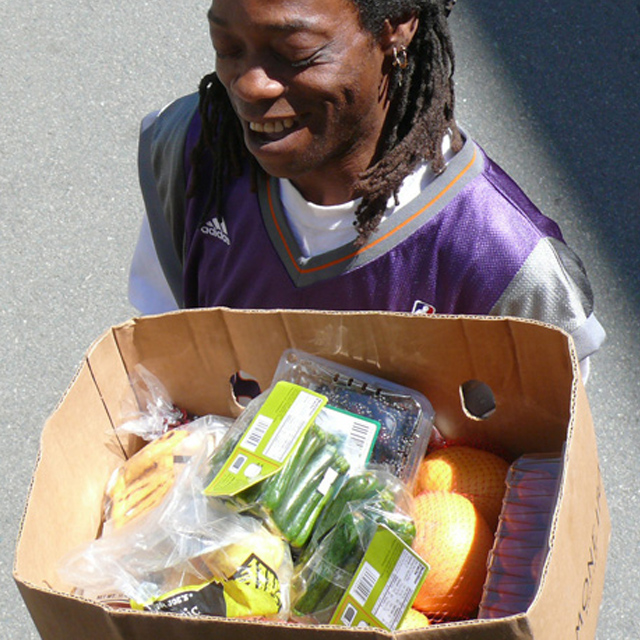 Leave No Leftovers Behind: Food Rescue to the Rescue

“Food rescue” is a cause with a great name — it lends itself to images of pears wearing life jackets and loaves of bread cast as damsels in distress — but behind it is a big and complicated problem. A few sobering facts: 1 in 6 Americans struggles with hunger, all while a whopping 1/3 of our entire food supply ends up in landfills. (That’s $197 billion thrown in the trash every year — gulp.)

Fortunately, the forecast isn’t all doom and gloom, thanks to the many incredible organizations around the country working double time on the food rescue shift. Whether picking up unused produce from grocery stores, collecting extra ingredients from restaurants, or stopping by bakeries and orchards to scoop up some leftovers, these food rescue heroes step in to send garbage-destined staples back where they’re needed most. Do they deserve capes, or what?

Over in Pittsburgh, 412 Food Rescue aims to fight hunger by collecting excess food from local providers. The non-profit group was co-founded in 2015 by Gisele Fetterman of The Free Store and Leah Lizarondo of The Brazen Kitchen, and has since been able to salvage more than 346,000 pounds of food for redistribution. With the help of local volunteers and mobile technology, teams of rapid respondents are able to strategically travel the city and efficiently transport food to those in need.

To help with the procurement of more healthy food, 412 Food Rescue launched the Ugly CSA initiative, which accepts the 20% of produce that is rejected from local grocery stores. These "misfit" veggies have the same nutritional value, but are unharvested due to their imperfections.

412 Food Rescue is also an organization close to our hearts—and cars. Zipcar's Pittsburgh office recently partnered with the org and Giant Eagle to give driving discounts to volunteers and expand their fleet of powerful produce pursuers.

Daily bread gets another day, thanks to Cambridge Bread Rescue. © Jman78/iStock/Thinkstock

Whether operating on a nationwide or a hyper-local scale, food rescue orgs are a hugely impactful part of communities across the country. One such small but mighty micro-org is Cambridge Bread Rescue. Founded by Lee Goodwin a decade ago, the entirely volunteer-run organization rescues unsold bread, baked goods, and other artisan goodies from local bakeries before delivering them to area food shelters and pantries.

“Independent bakeries present a special challenge to food collection agencies,” Goodwin explains, which is why their excess food is often neglected for pick-up. “Most need to unload their unsold goods during a small time window after closing.” That’s the void that Cambridge Bread Rescue seeks to fill: Their drivers work around bakery schedules to ensure those orphan baguettes find a good home.

Great food does grow on trees, and City Fruit makes sure it goes to good use. © City Fruit

While Cambridge Bread Company specializes in all things doughy, Seattle-based City Fruit turns to the trees for its food rescue mission. During harvest months, the organization collects and distributes fruit to meal programs, while in winter it hosts classes and workshops to teach urban tree owners how to care for their trees — and ensure a fruitful bounty.

“Ending hunger is all about increasing access for all communities, people, and places,” says Catherine Morrison, City Fruit’s Executive Director. Last year, City Fruit welcomed 200 new urban tree owners to its hyper-local donation circle, while the (literal) fruits of the org’s labor stay in the same neighborhood, to cut down on transit time and cost.

Fresh produce can be hard to come by, which makes Food For Free’s efforts all the more vital. © Food For Free

Maintaining access to healthy produce isn’t always easy, of course. For many small food banks and pantries, it can be tough to stock fresh fruits and veggies, especially for those that are underfunded, volunteer-driven, and don’t have storage or transportation options. That’s where Food For Free, which services Greater Boston, comes in, explains Executive Director Sasha Purpura. “Because we can deliver to them on a daily basis and at scheduled times, these programs are now able to provide healthy foods to the people who most need the nutrition.”

It’s a winning formula: Last year, Food For Free diverted 1.3 million pounds of food away from the waste stream — preventing it from becoming food waste and remaining, simply, food.

With more than 30 years behind it, Philabundance has made a huge impact on anti-hunger campaigns in Pennsylvania and New Jersey since its founding. The large-scale org oversees farmers markets, community kitchens, non-profit grocery stores, and programs aimed at school-aged kids, in addition to its Grocers Against Hunger partnership with local food vendors, which rescues a staggering 10 million pounds of food per year. Simply, “there is no typical day at Philabundance, because we do so much to drive hunger from our communities,” says representative Stefanie Arck.

Whether you run a food service or not, Zero Percent makes pitching in easier than ever. © Creatas Images/Creatas/Thinkstock

Looking to get in on the food rescue scene yourself? Volunteering is a great starting point — as is (if you run a shop or food business) signing up for Zero Percent. Billed as the safest, easiest, and most reliable way for stores to donate surplus food, Chicago-based Zero Percent lets users schedule pick-ups at any time. So far, it has partnered with 234 non-profits and delivered 506,000 meals. Joining the movement has truly never been easier.

Are you involved with food rescue in your community? Tell us your tips and experiences in the comments below.