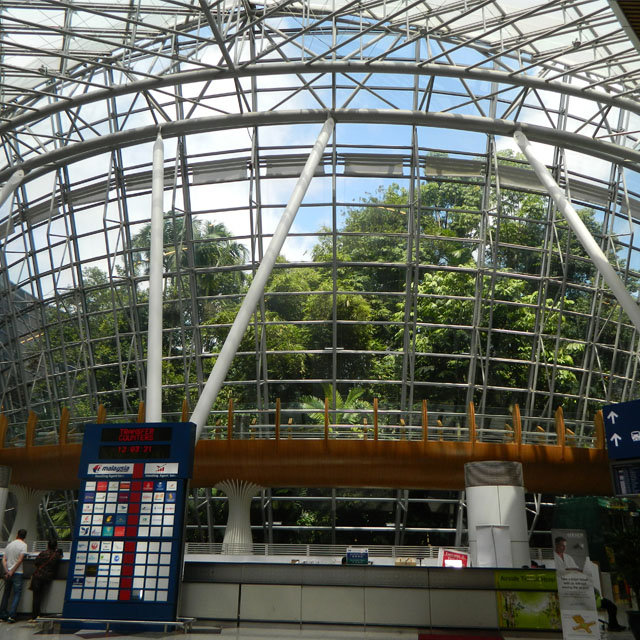 Traveling is fun, but hanging out in the airport? Not so much. The delays, layovers, long lines, miles between gates...it just plan stinks. But if you’re traveling to one of these airports (AKA aviation palaces of amusement), you can thank your lucky stars.

There’s certainly no shortage of things to do in glamorous, jet-setting hubs like Qatar and Dubai, but we also found some pretty impressive airport action in North America, too. Check out our 9 amazing finds. These sure beat curling up in a ball on an uncomfortable chair, straining to hear CNN over the last calls for extremely late passengers. (Hurry up already, David Duquez on the flight to Tampa!!)

Doze off without blowing off your flight, thanks to the plugged-in SnoozeCubes at the Dubai Airport. Photo courtesy of snoozecube.com.

The world’s second busiest airport (set to overtake Heathrow very soon) sees more than 75 million passengers a year. That’s a lot of people to keep happy. Good thing they have a seriously tricked-out facility where you can eat, sleep, swim, and rub elbows with the rich and famous.

Stop by the fully equipped gym to take a dip in the indoor pool (with Jacuzzi, naturally). Or if you’re seriously jet lagged, book yourself into a SnoozeCube, with a full-sized bed, an entertainment system with touchscreen TV, and Wi-Fi. (Don’t worry. It’s connected to the airport’s flight information system, so you won’t over-snooze and miss your flight. They truly thought of everything.)

Oh, and if you wake up only to find out your flight’s been cancelled (nooooo!), you can soothe the stress by checking into a 5-star hotel—without leaving the airport. It’s all pretty decadent. However, we do suggest checking out the city. Not just the airport. There really is a whole world out there.

Home of the Grand Ole Opry, Bonnaroo Music Festival, and the Country Music Hall of Fame means Nashville, Tennessee is the heartland of live music. So maybe we shouldn’t be surprised that even the Nashville International Airport gets in on the act. The Tennessee airport has hosted some pretty sweet live performances in its terminals since 1988. Local acts regularly perform on four stages—up to 100 bands play a year! They give your pre-flight time a down-home, rootsy soundtrack; no plastic-wrapped headphones required.

Start a company during your layover at #ConvergeSFO for impromptu brainstorming. ‘Cause it’s San Francisco. Photo courtesy of SFO.

Of course the home of Silicon Valley has an area at their airport for brainstorming about the tech industry. (Uh, doi.) #[email protected] is a space for guests to exchange ideas about technology, start-ups, the sharing economy, travel, politics, and ways to change the world. (You know, no big.)

The lounge, built for ideating rather than lounging, has free Wi-Fi, tables, chairs, power outlets, a white board, a magnetic chalkboard, and the residue of dozens of brilliant technological breakthroughs that have happened there. (Probably.) They also have the Berman Reflection room for quiet meditation, so you can ponder the feasibility of that great idea you just had.

Hang ten, or just watch as amateurs and pros surf the 33-foot-high wave at the Munich Airport. Photo courtesy of jetsetter.com.

When you think of Germany, surfing may not be the first thing that springs to mind. (Or the 11th or 12th.) But the Munich airport has hosted five seasonal surfing championships on their manmade (obvs) 33-foot-wide, 5-foot-high standing wave and pool, open to both professionals and amateurs. Cause you know, your flight to Berlin doesn’t leave for another 2 hours, so maybe it’s time to hop on some gnarly waves?

The best view of the Rocky Mountains happens even before you leave the airport. Instant-gramification. Photo courtesy of Denver International Airport.

Forgot to send those postcards? If you’re departing from the Denver Airport, you can take your pic in a life-sized photo op! Such a clever idea, and you can email it to friends or post it on social media. (If you’re going for that whole, humble-travel-brag type thing.)

After you take your pic, you can take part in the Mile High City’s chill-out vibe by participating in an interactive light display, stroll through the art walk, or gander at arguably the best view of the Rocky Mountains from the airport windows. Makes you almost wish you weren’t leaving.

When you hear the words “indoor rainforest,” you may be thinking of a cheesy themed restaurant. But no, this is Malaysia. So of course their airport features a botanical garden under glass, complete with indigenous jungle plants! Hope you don’t have any of those little bags of peanuts in your pockets. The monkeys might snatch ‘em.

Look on the sunny side of airline travel at the many gardens within the Singapore airport. Photo courtesy of CNN.

Maybe you’re in Singapore’s Changi Airport returning from your international voyage, and you reveled in the bright lights and big city, but missed out on the natural wonders. Well, you can still find them, at the…airport? Yep. If you’ve got a couple hours to kill before you strut down the jet way, you can explore half a dozen different gardens throughout the terminal, including a field of sunflowers, a tropical habitat filled with butterflies, an orchid garden with koi pond, and a 10-story high waterfall grotto.

If anyone tells you they’re bored at the Incheon Airport, they’re lying. Photo courtesy of pelagicus.wordpress.com.

Are you putting us on? Nope. You can seriously play golf while waiting for your plane to board at this never-boring airport in Seoul, South Korea. The international South Korean complex has a golf course, a spa, private sleeping rooms, an ice skating rink, a casino, indoor gardens, and a Museum of Korean Culture. Phew. If all that made you hungry, there’s a smorgasbord of shops, restaurants, and fast food courts to tuck in and enjoy.

If you didn’t get a chance to shop on the High Street while you were trolling around Londontown, now’s the perfect time. Book a personal shopper at Heathrow (by appointment only, of course) and have someone to guide you through the stylish wares at Chanel, Gucci, Louis Vuitton, Prada, and Harrods.

What’s that, you say? You’re not independently wealthy? Well, you can still live large and get one of those giant Toblerone bars at the Duty Free shop! If you’re still feeling peckish, there’s everything from fine dining to pubs to pass the time or watch the footie. You’ll still be able to hear your flight getting called and wish the bar man a fine “Cheerio.” (Eventually, you’ll stop speaking in a terrible British accent. But not just yet, guvna!)