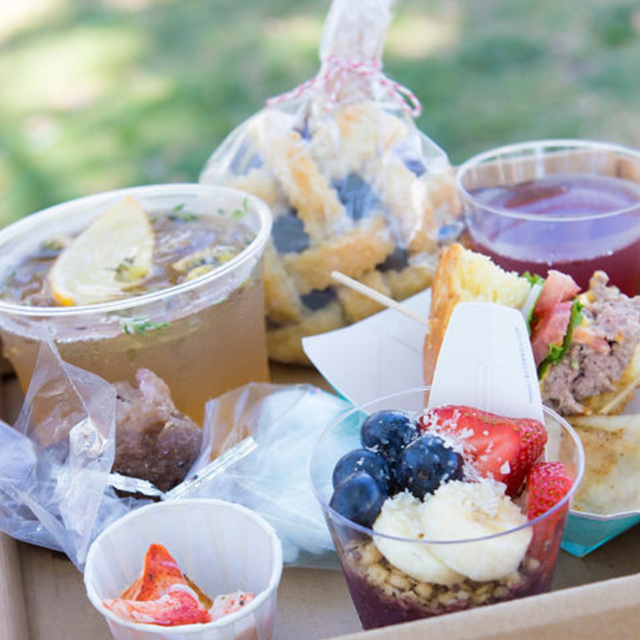 Nosh On These 5 Festive Food Festivals

Friends and food are one of life’s great pairings. Add a splash of sunshine and you’ve got the perfect day. Here are five can’t-miss food festivals to whet your appetite this summer and fall. While there’s no dress code, here’s our unsolicited advice: wear something with an elastic waistband.

Sample sizes = more variety to fill up on at Taste of Chicago. Image courtesy of Jaclyn Elizabeth Rivas

A summer tradition since 1980, Taste of Chicago is the world’s largest food festival and attracts more than a million foodies over five days. Held in Grant Park (aka Chicago’s “front yard”), admission is free and the variety is fabulous. Restaurants, food trucks, and pop-up vendors sell sample-sized bites of their popular offerings. The Taste isn’t only about Chicago-style pizza, ribs, dogs, sausages, and cheesecake. Top talent performing from multiple stages keeps the masses entertained. Although this festival just wrapped up, it’s not too early to mark your calendar (and build up a snacking wishlist) for next year.

Affordable. All-inclusive. OK LA, we’re listening. From top chefs and trendy restaurants to savory street carts, enjoy samples from 100 eateries in the City of Angels, SoCal, Baja California, and even Mexico Cityat LA Food Fest. For dessert, make new friends during the ice cream social. Wash it down with iced coffee, craft beer, or a signature cocktail, and spread out on the grass as DJs spin summer jams. Talk about good grub for the buck: general admission is just $65. A single ticket gets you all of everything, including beverages.
September 8, 2018

Some food celebrations cast a wide net with many cuisines and musical acts. Others revolve around a single ingredient. (Hello, chokecherry festival in Montana.) And somewhere in between is Picklesburgh, a free and irreverent event for everything pickled. Sliced, speared, or on a stick—there’s plenty of fermented cucumbers to go around. After all, Pittsburgh is the home of Heinz, famous purveyor of pickles. And don’t forget the juice. A cringe-worthy contest challenges contestants to chug 32 ounces of brine in the fastest time. Now that pickling at home is going mainstream, this three-day festival on the Roberto Clemente Bridge is inspiration to try doing it yourself.
July 20-22, 2018

Pig out at VegOut—minus the pigs, of course. Image courtesy of VegOut! Portland

When it comes to fantastic food, Portland already has a lot on its plate. Make room for more when a trailblazing eating experience debuts this month. VegOut! is a vegan food and beer festival with 100+ vendors on one cruelty-free weekend. Organizers describe it as a “head-to-toe experience of all things vegan.” In addition to plant-based victuals and kombucha, expect vegan-approved clothing, jewelry, makeup, skincare, and art for sale to the beat of live entertainment in the park. Go plant power!
July 21-22, 2018

The Big Apple’s premier culinary event is New York City Wine & Food Festival. Every October there are more than 80 sessions, from kitchen demos and industry seminars to a kid-friendly breakfast pajama party and adult dinners with celeb chefs. The “Party Animal Package” is your passport to three evenings of delicious fun. Be sure to pick a Designated Zipster: You’ll pair tacos and tequila on Thursday, and sushi and sake with Iron Chef Masaharu Morimoto on Friday. Saturday night indulgence is a dessert party. NYCWFF isn’t just a good time, but also a good cause. Net proceeds benefit No Kid Hungry and Food Bank For New York City.
October 11-14, 2018