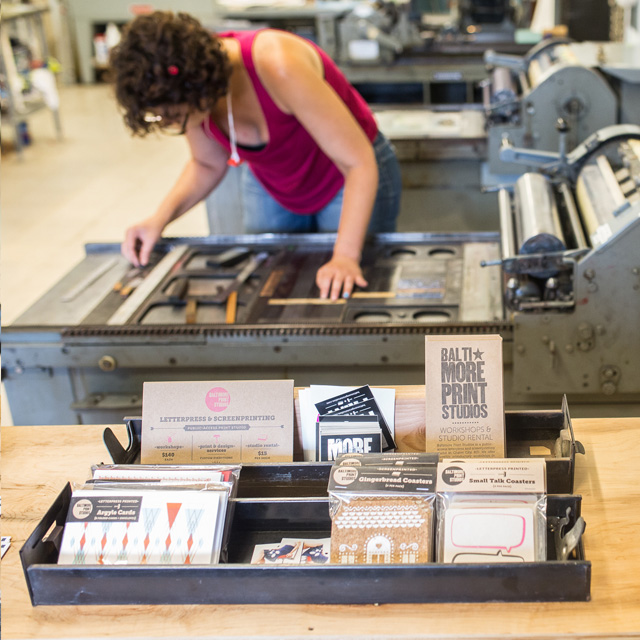 If you want to dive into Baltimore’s underground arts scene, make Station North Arts & Entertainment District your first stop. Just steps away from Baltimore’s Penn Station, this edgy, up-and-coming area is full of art studios, galleries, bars, and theaters. Spend some time getting to know the neighborhood—and the creative forces that live, exhibit, and perform here—and you’ll soon see why Baltimore is attracting young transplants from all over the country.

Scattered across Station North, you’ll find dozens of colorful murals that make up Open Walls Baltimore (openwallsbaltimore.com), an outdoor exhibition curated by Baltimore-based street artist Gaia. Artists who have left their mark on the area have come from as far away as South Africa and Spain, plus several local muralists. You could easily spend hours photographing the murals, each of which is in a different artistic style and all of which are Instagram-worthy.

Mural, mural on the wall, which one’s the coolest of them all?

If the big screen is more your thing, The Charles Theatre (1711 N. Charles St.; 410-727-3464; thecharles.com) is a can’t-miss cinema with its own storied history. The arthouse theater began screening films back in Hollywood’s golden age—the 1930s—and today it’s the perfect place to catch indie flicks, foreign films, and cult revivals. The theater is BYOB, so before the film starts, pick up some sangria at the adjacent Tapas Teatro (1711 N. Charles St.; 410-332-0110; tapasteatro.com).

A movie at home’s more fun when you’ve got friends, a historical theatre, and the perfect cocktail. So, basically, a visit to the Charles Theatre.

Station North Chicken Box (1 W. North Ave.; stationnorth.org) is not only the headquarters for the arts district, but also a multi-use space featuring exhibitions and theater performances. Every third Saturday of the month, you can browse and buy work by local artists at the Station North Arts Market (stationnorthartsmarket.com). In case you’re curious, the name “Chicken Box” is a nod to the site’s former occupants, who sold chicken-and-fry combos—fast-food staples in Baltimore.

For a taste of Baltimore’s live music scene, you can catch bands just about every night of the week at The Windup Space (12 W. North Ave.; 410-244-8855; thewindupspace.com). The venue exhibits local artwork and has a stage that Twin Peaks fans will adore—it’s decked out with red curtains and a chevron-print floor, just like FBI Special Agent Dale Cooper’s dreams. Local and national acts perform here, and every third Friday of the month, you can get down during Four Hours of Funk.

Catch your new favorite band at The Windup Space, whose David Lynch-inspired stage looks as good as it sounds.

Further down the street is Baltimore Print Studios (18 W. North Ave.; baltimoreprintstudios.com), which offers letterpress and screen-printing workshops. Daylong introductory classes can easily be squeezed into a weekend trip for those who fancy exercising their inner creative.

Print’s not dead — it just got artsy! — at Baltimore Print Studios’ inspiring workspace.

Named for anarchist and political activist Emma Goldman, Red Emma’s (30 W. North Ave.; 443-602-7611; redemmas.org) is a worker-owned bookstore and vegetarian restaurant. This industrial-chic space feels like an infoshop, with plenty of politically charged books and zines. Whether or not your politics align with those of the staff, you can feel good supporting a co-op that roasts fair-trade coffee on site and serves ethically sourced food.

Fancy a bookstore chock-full of ethics and good reads? Park your bookmark at Red Emma’s.

Joe Squared (133 W. North Ave.; 410-545-0444; joesquared.com) is a hip pizza joint with live music, a vast selection of rum, and—of course—delicious food. The coal-fired pizza comes in a square shape with crispy edges, and often lands on local “best of” lists. But Baltimoreans aren’t the only ones who love Joe Squared: "Food Network Magazine" recently named the flag pizza (a pie split into thirds to look like the Italian flag) one of the best pizzas in the nation.

Pizza lovers of all shapes will rave about the famous Joe Squared.

While all these stops are within walking distance of one another, if you’re looking to use pedal power to get around the city, stop by Baltimore Bicycle Works (1813 Falls Rd.; 410-605-0705; baltimorebicycleworks.com). The friendly staff at this bike shop will set you up with a two-wheeler for $25 a day. Any cyclist visiting during the last Friday of the month shouldn’t miss the Baltimore Bike Party, a mass monthly ride with a different route every time.

Seeking two wheels when you want them? Funny. Baltimore Bicycle Works has just the thing.