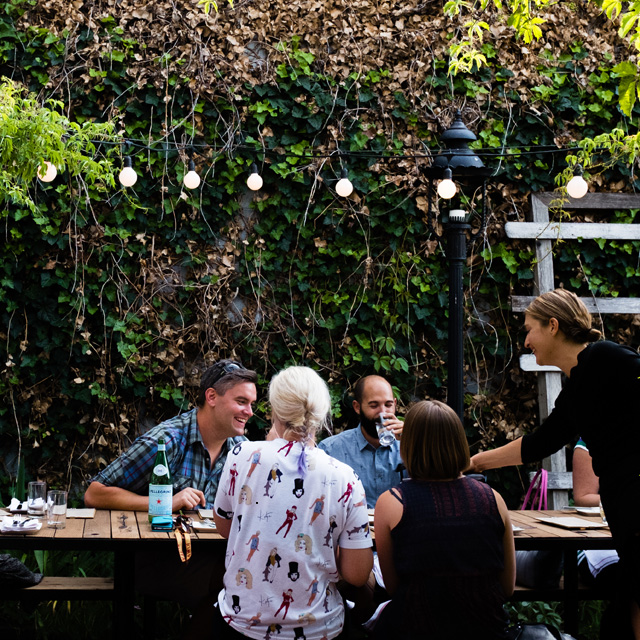 Start your day of RiNo Art District explorations at Crema Coffee House, which features the crema de la crème (ahem) of U.S. artisan roasters. Grab a French press coffee, a cold brew, or a good ol’ espresso—you really can’t go wrong. Especially when you pair your java with some grub. (Crema is also renowned for its food offerings, like its sweet potato waffle, which comes topped with candied walnuts, hazelnut whipped cream, and maple syrup.) Say no more.

Once your day’s been suitably kicked into gear, it’s over to The Source. A former 1880s brick foundry and current artisan market, the building is testament to RiNo’s industrial past and its recent rebirth all at once. Inside are restaurants, a photography studio, a flower shop, and a brewery (more on that later). But for a little retail therapy, make way to Svper Ordinary. An art gallery–boutique hybrid, it’s the spot for handmade home goods, jewelry, work by local artists—and the occasional tarot deck.

With workshops and hands-on indoor farming, GrowHaus lets you dig into your food—literally.

Prefer an afternoon spent getting your hands dirty? Right on the edge of the RiNo Art District lies The GrowHaus, a nonprofit on a mission to educate and provide nutritious food for a community that has found itself in a food desert. Afternoons can be spent taking public workshops on sustainable garden design, beekeeping, or aquaponics. You can also volunteer a bit of your time to help take care of the indoor farm. GrowHaus also offers weekly tours—the perfect excuse to grab some fresh veggies to go.

You can’t explore Denver without having an artisan brew (unless you’re the designated driver, natch). Time for a refresher back at The Source, where you’ll find Crooked Stave, one of the top-ranked breweries of Belgian-inspired sour beers in the U.S. The owner, Chad Yakobson, began the brewery as part of his masters dissertation on yeast, and the strains that he uses help impart the tart and funky flavors that make these suds so special. Tentative to try? Begin with the super popular Vieille Artisanal Saison, which should help you cool down after an afternoon spent getting grubby.

Beer not your thing? Don’t worry—Denver has wine, too! Single-handedly upping the city’s wine cred is the stereotype-busting Infinite Monkey Theorem, a back-alley, urban winemaker that sells its vintages in both bottles and cans (yes, cans). Visitors can book a tasting and a tour of the 30,000-square-foot space most days of the week.

But if the weather’s nice, there’s nowhere else in the neighborhood that does relaxation quite as well as the RiNo Beach Club—the only beach in town (or for hundreds of miles around, for that matter). A seasonal pop-up, the beach club sees 10,000 square feet of sand, a huge pool, a DJ, local bands, and food vendors plopped down right in the heart of RiNo. You’re gonna wanna pack a swimsuit.

There’s room at the table for everyone at The Populist, where sharing your environment and your food isn’t just encouraged, it’s expected.

Nothing like some beach volleyball to work up the ol’ appetite. Once evening’s on its way, head over to The Populist, where communal tables help foster a warm community vibe. What’s on the menu at this neighborhood fave? Think small plate New American eats, which are priced affordably and make for pretty epic sharing. Who’s up for salt and vinegar popcorn to start? Maybe a char siu pork belly tostado? Summery sweet corn agnolotti? (Is it dinnertime now?)

If communal dining isn’t quite your style, might we recommend a private table somewhere a little bit moodier? Inspired by mid-20th century supper clubs and underground Hollywood jazz venues, RiNo’s Nocturne Jazz & Supper Club offers a unique scene with live music, good food, and a cool throwback atmosphere. Apart from the standard menu, the supper club also offers a regularly changing menu of “rendition” plates, which are inspired by individual jazz albums. Did we mention that those albums are also played live, inspiring the ultimate meal and music pairings? We can’t think up a better way to finish off a day of RiNo explorations.