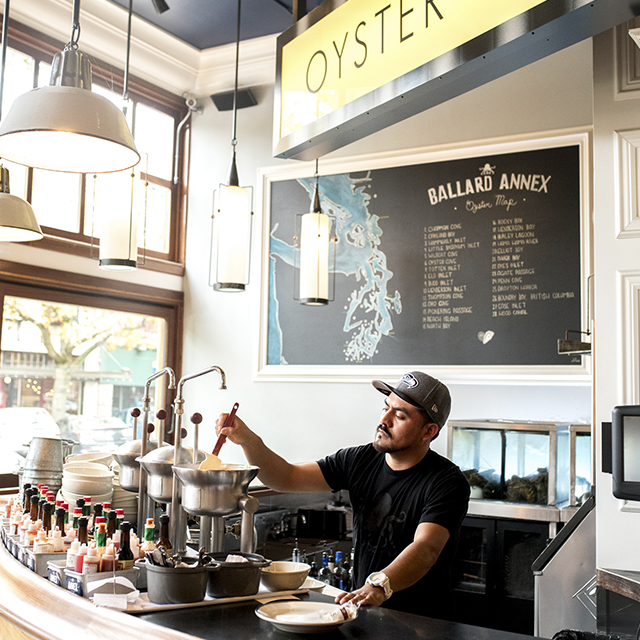 Seattle offers so much more than rain, Starbucks, and a renowned grunge legacy. Dig beyond the city’s downtown core to discover neighborhoods bursting with unique identities. Among them: Ballard.

Historically a Scandinavian seafaring community, the now-hip neighborhood is perfect for those looking to explore Seattle, thanks to its amazing bars, restaurants, boutiques, and a fast-growing microbrewery scene. Oh, and an off-the-charts walkability score. Boats from Discovery Channel’s “Deadliest Catch” pass through the Ballard Locks following snow crab season; Google has nearby offices. So you never know who you’ll sidle up next to.

If you want to experience Ballard like a local, here are eight places worth checking out. (Beard and Ray-Bans optional.)

Walk near the Locks to soak in 20 miles of scenery.

Whether you walk, run, bike, or rollerblade, the Burke-Gilman Trail, a popular Puget Sound commuter trail, is the place to get your sweat on. It’s also one of the best ways to explore Seattle, given that it stretches for nearly 20 miles, from Golden Gardens Park to the Sammamish River Trail. There’s much to see along the Ballard portion of the trek, where it follows Shilshole Bay and the Lake Washington Ship Canal. Wind your way north to the beach at Golden Gardens Park for sunsets and views of Puget Sound and the Olympic Mountains.

Seattle may be famous as the birthplace of Starbucks, but locals in the know skip the chain in favor of Caffè Fiore. This neighborhood coffee shop roasts 100% organic beans and has its own signature serve: the Sevilla, a zingy mocha with orange zest.

Once you’re hopped-up on caffeine, head one block west to historic Ballard Avenue. If it’s local and in season, the well-attended Ballard Sunday Farmers Market will have it. Now in its 15th year, the weekly farmers market is held from 10 AM to 3 PM, so be sure to stop by early on in your explorations. Pick up a tote bag full of produce, grab a wood-fired slice from Veraci or a bag of warm, mini cinnamon doughnuts, then stroll the tree-lined stretch of Ballard Avenue NW. Unlike some other local outdoor markets, pups are also welcome to join in the fun.

Don’t let the name fool you: Horseshoes is fully stocked with fashionable duds for the two-legged set.

Ballard is a neighborhood with plenty of its own character, so you can bet that its boutiques follow suit. For feminine frocks and vintage cowboy boots, swing by rustic-chic boutique Horseshoe, also located nearby on Ballard Avenue. Featuring niche designers like Ella Moss, Velvet Heart, and Weston Wear, the shop also stocks a friendly staff who will help you fix up and look sharp. Look for owner Jill Andersen’s personal collection of horseshoes strewn around the store.

Don’t know the difference between baby’s tears and a bird's nest fern? A few doors away, the plant-savvy staff at The Palm Room will guide you through the world of succulents and other leafy friends in its hands-on terrarium class. For $50, you’ll take home a one-of-a-kind plant, rock, and moss creation in a glass orb that’s simply adorbs.

Have buckets of fishy fun at Ballard Annex Oyster House.

Time to seek out some victuals. Only a short stroll away (perfect for the bag-laden), the breezy, nautical-themed Ballard Annex Oyster House is where shellfish reigns supreme. Locals cozy up to the bar for its daily happy hour from 3:30–6:30, featuring $1.50 oysters, $5 pints, and $6 glasses of bubbly. Check the chalkboard for daily oyster options. Still undecided? Try Willy’s Bucket, a mix of oysters, mussels, and manila clams in a garlic broth.

If craft beer’s your jam, you’ll also be interested to know that Ballard boasts at least 10 microbreweries within five square miles, with more opening all the time. Among the best? Stoup Brewing Company. Sample a flight of beers or the latest release on tap (pro-tip: look out for the Bike Rye'd Saison, a collaboration with fellow Seattleites Flying Bike Cooperative Brewery). For the drivers out there, Stoup also hosts food trucks and live music, so you won’t be missing out on the good times.

Given this city’s foodie cred, you can’t explore Seattle without stopping for an excellent meal at the end. When business partners Jen Doak and Mike Whisenhunt took over the space formerly occupied by Le Gourmand—a keystone of the Ballard dining scene for 27 years—they transformed it into a bright and beachy space with unabashedly convivial vibes. At Brimmer & Heeltap, Chef Whisenhunt’s “bistro-pub” fare shines with punchy Korean flavors. Think steak tartare served with daikon, and nori rice crackers and grilled pork shoulder with corn kimchi. The restaurant is fancy enough to impress a first date, yet unfussy enough for an impromptu sip and bite at the bar. Plan to make friends.