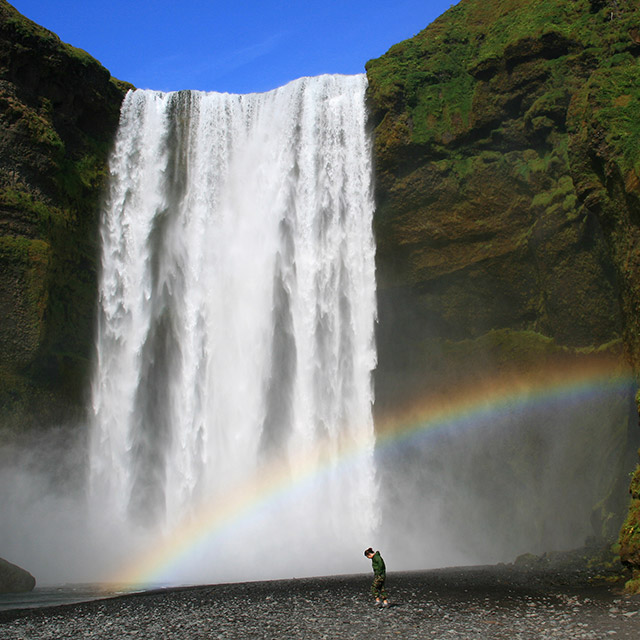 The 7 Most Instagram-Worthy Road Trips In the World

Road trips are a fabled backdrop to timeless adventure—and a literal backdrop to sharing that adventure. Keep Instagram on standby as the photogenic open road unfolds on these all-star routes the world over. Buckle up and get ready for some dreamy drives.

Say Aloha to Hawaii with a drive around the Big Island.

When it comes to snapping up scenery, driving around the Aloha State is low-hanging fruit. The only active volcanoes are on the Big Island, and Kilauea is one of the world’s most lively. Lava lovers can drive through Hawaiʻi Volcanoes National Park, and flow like molten rock down Chain of Craters Road from Kilauea’s Crater Rim Drive to the Holei Sea Arch. Another road in the park brings you to the island’s other breathtaking resident, Mauna Loa—the largest volcano on the planet.

From hiking to whale watching, the picture-perfect Cabot Trail has it all.

The Cabot Trail crowns the top of underrated Nova Scotia. This ribbon-like road is on the eastern island of Cape Breton, about equal in area to Hawaii’s Big Island. While not tropical, the 185-mile trail is similarly oceanside, and just a quick flight from urban dwellers in the Northeast United States.

European John Cabot stumbled upon this picture-perfect landscape centuries before the tourists taking snaps now. Stretch your legs on the trails of Highlands National Park—worth the climb for commanding views of the coast—or drop to sea level for kayaking, sailing, and whale watching.

Is your feed chock-full of friends who’ve Instagrammed in Iceland? There’s probably a reason: This red-hot destination is ice-cold beautiful. Nature dominates civilization—puffins even outnumber people in some towns. As you pass active volcanoes, plunging fjords, roaring geysers, and rainbow-crossed waterfalls, you’ll regret not having paid closer attention in earth science class.

The first all-weather road connecting the Midwest to the West Coast is a huge draw for tourists seeking remnants of bygone 1950s and ‘60s American culture. Now it’s your turn!

Follow the M6 from London to Edinburgh—and everywhere in between.

Modern culture and Old World charm dovetail en route from London to Scotland. Your first stop is scholarly Oxford University and the Bodleian Library, one of Europe’s oldest. Just north on the M40, Stratford-upon-Avon is the birthplace of William Shakespeare and home to the Royal Shakespeare and Swan Theatres. A trio of major cities are accessible via the M6: Birmingham (museums and canals!), Liverpool (the Beatles!), and Manchester (soccer—err, football!).

The M6 continues north through the verdant, picture-perfect countryside hills of the Lake District. Before the Scottish border, detour to Hadrian’s Wall, the fortified edge of the Roman Empire. Max out your camera roll with snaps of Victorian and Art Nouveau architecture in Glasgow, or festivals aplenty in artsy Edinburgh.

Live out your Lord of the Rings fantasies in New Zealand.

Out-of-this-world filming locations for The Lord of the Rings, The Hobbit, and The Chronicles of Narnia put the South Island of New Zealand on the map for audiences worldwide. For starters, try a four-day loop starting and ending in Christchurch, gateway to the South Island. Behold glacial snowfields on Aoraki Mount Cook, the country’s highest peak. It’s part of a national park, with after-dark photography opportunities aplenty—like stargazing at the world’s biggest Dark Sky Reserve, around Lake Tekapo.

Day or night, spectacular scenery and pure alpine air can lead to visions about starring in your own fantasy adventure series. Totally normal. Just don’t daydream behind the wheel.

Bolivia’s salt flats are so vibrant that they’re visible from space. Image courtesy of Jeffrey Tanenhaus.

How’s this for eye-popping? The world’s largest salt flats are so big and so white that they’re visible from space. The Chilean town of San Pedro de Atacama (gateway to the bone-dry Atacama Desert) is the jumping off point for multi-day tours culminating at the Uyuni Salt Flats in Bolivia. Along the unmarked way, you’ll pass flamingoes lounging at lagoons tinted white, green, and red based on mineral content. (Road) trippy!

For this journey, leave the driving to a local who can navigate deserts so surreal that one is named after Dalí. With elevations topping 16,000 feet, this once-in-a-lifetime journey is not for the altitude averse—but if you can manage, it’ll surely take your Instagram pics into the stratosphere.