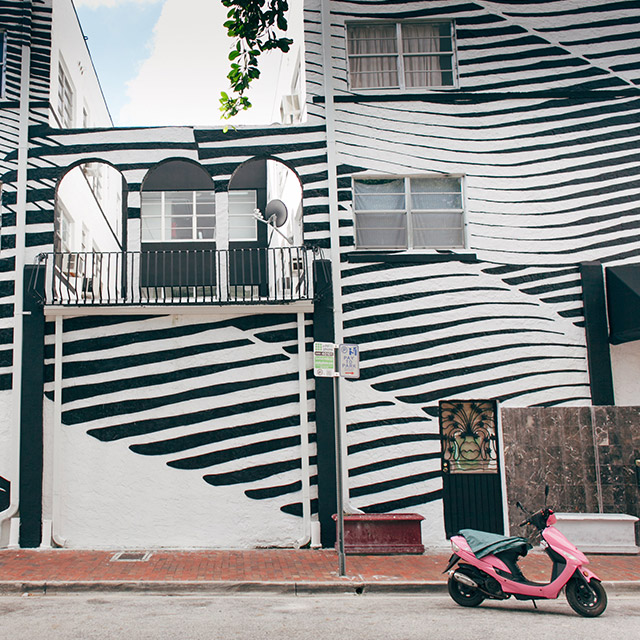 You’ve seen the beaches and the bars in Miami, and perhaps a celebrity sighting or a model shoot or two, so you think you’ve seen it all in the Magic City. Cool. Think again. Miami is full of one-of-a-kind experiences. So before you head out of the 305, here are some top-notch, must-see places and events to add to your warm-weather itinerary.

After you’ve beached it up during the day, indulge in a true Miami experience: sunset dinner at Monty’s Sunset on South Beach, a casual anything-goes waterfront restaurant tucked away in the city’s Coconut Grove neighborhood. (Look for the big anchor above the red Monty’s sign.)

Here, the breezes from Biscayne Bay mix with the smell of grilled seafood as patrons dine or drink in the outdoor patio that looks like a giant tiki hut. There’s live music from bands that play calypso, light reggae, and top 40 from 5 p.m. to 10 p.m. daily. (There’s also indoor seating for those who need a little shade.) Behind the restaurant is a marina filled with bobbing sailboats and yachts, which add to the relaxing bay views. While there’s typical fare like chicken and burgers, folks flock here to savor fresh seafood by the sea, from fish tacos to conch fritters.

For local seaside seats and seafood eats, make a night of it at Monty’s Raw Bar and Marina.

Speaking of sunset, one of the best views (and shh! best-kept secrets around) is the stunning dusk at La Ermita de La Caridad, a cone-shaped church that also sits along Biscayne Bay.

The Coconut Grove church is a national shrine that houses a replica of Our Lady of Charity statue that was once housed in Havana, Cuba. Tourists and pilgrims stop here daily to pray to her. But the seawall behind the church is another stunner, offering breathtaking vistas of the bay, downtown Miami, and nearby Key Biscayne. Lined with rows of coconut palms, the seawall is a popular spot for (spiritual) selfies.

Peace out at Coconut Grove Church and its behind-the-scenes views.

Another must-see sits across the causeway at South Pointe Park in Miami Beach. With its concrete benches that front rocky jetties, the park is the southernmost point of the city. Here, denizens gather both early and late to watch the sun rise and also dip back into the ocean, to a smear of purple and pink skies with downtown Miami as the backdrop. Besides offering a family-oriented spot to watch fish (or fish for dinner!), the park’s pier also offers fantastic views of the colossal cruise ships that glide out of Government Cut, the narrow shipping channel.

Head south (like, the most south in Miami) at the peaceful—and aptly named—South Pointe Park.

If you want to be on the move yourself, ride along with throngs of fellow cyclists on Miami city streets during Critical Mass. This informal community get-together on wheels takes place the last Friday of every month, with crowds gathering at 6:30 p.m. for a 7:15 p.m. ride from Government Center, 150 NW First St., in downtown Miami. The bicyclists take over the city (and sometimes traffic laws) in their ten-speeds, dirt bikes, or whatever wheels they bring. Police help keep the car traffic flowing by guiding the cyclists, who ride about 12 to 18 miles through the various neighborhoods around downtown. And the best part: It’s free. (Note to Zipsters: Traffic can come to a halt in and around downtown Miami because of Critical Mass, so try to plan your trips accordingly.)

Team up with folks who love spokes at the monthly bike bash, Critical Mass.

If sweating and cycling is not your thing, then take your Zipcar to Viernes Culturales (Cultural Fridays), which is held from 7 to 11 p.m. the last Friday of each month along Miami’s historic Calle Ocho (that’s español for Eighth Street) between 13th and 17th Avenues, in the heart of the city’s Little Havana neighborhood. This giant cultural street fair features 22 art galleries, arts and crafts vendors, live musicians, and dancers.

Celebrate arts in the street with the once-a-month Viernes Culturales on Calle Ocho.

The center of the action takes place at Domino Plaza in Maximio Gomez Park (also known as Domino Park, due to many local who gather there to play the popular game at all times of day). As you gallery hop, Iook down at the sidewalk and see some names of Miami entertainment royalty (from Gloria Estefan to Celia Cruz) who are honored in the star-shaped plaques of the Latin Walk of Fame along Calle Ocho. And if you’re hungry, local eateries such as El Pub Restaurant are open late for a cafecito, creamy mamey shake, and Cuban sandwich.

All that reveling is gonna build up an appetite. Fill up with authentic cuisine at El Pub Restaurant.

For another type of wheel fun, there’s the Miami International Auto Show (Nov. 5–15 in 2015), one of the biggest car shows nationally. Car enthusiasts pull in to check out dozens of the latest and upcoming models from every major car brand. While the fleet of cars sparkles in the carpeted display areas inside the chilly Miami Beach Convention Center, there are cars outside, too.

To really get in the game, each year, Jeep officials bring Camp Jeep, a 20,000-square-foot rugged off-road trail where adventure-seekers can test out the latest Wranglers, Renegades, and Cherokees for five-minute rides to see what the cars and drivers are made of. (There’s even an 18-foot-high “Jeep Mountain” on the trail!) Even if you can’t afford any of these cars (some of which Zipcar has in its fleet), it’s fun to fantasize from the driver’s seat, whether it’s in a Mercedes or a Mazda. Tickets start at $15 for adults and $6 for kids ages 6–12.

Cars are the stunning stars of the show at Miami International Auto Show.

Tourists and locals love to devour the annual Food Network & Cooking Channel South Beach Wine & Food Festival, a weekend whipped up for foodies and wine connoisseurs Feb. 24–28. Celebrity chefs from the Food Network and local restaurants fill tents that dot the sand, where people come to nibble on their latest culinary creations. Scheduled to headline some events in 2016 are TV chefs Giada De Laurentiis and Rachael Ray. Tickets begin at $100, depending on the day and event.

For a real taste (or swig) of Miami, tap into the Wynwood Brewery Company, housed in the heart of the blossoming hipster arts district called Wynwood. (Check out the funky graffiti-themed murals that bedeck most of the area’s shops and buildings.) The four-year-old family-owned brew house serves a collection of signature, locally inspired craft beers with names like La Rubia (blonde ale), Magic City (pale ale) and La Negra (imperial smoked stout) that start at $6.

Get your fill of arts and crafts (well, craft beer) at the creative Wynwood Brewery Company.

The main bar counter offers a front row seat to how the craft beers are, well, crafted. Visitors can also take a weekend afternoon tour of the facility and see how the beers are made on premises. The bonus: You get to sample the goods.

While you sip your beer, look up and all around you—the brew house is also an art house, filled with paintings, artwork, and graffiti-covered bathroom doors (check out the huge portrait of Bono by the entrance), which everyone (even the designated driver) can indulge in.

Do you know of any stellar tucked-away spots or activities in Miami? Share your favorites in the comments below.