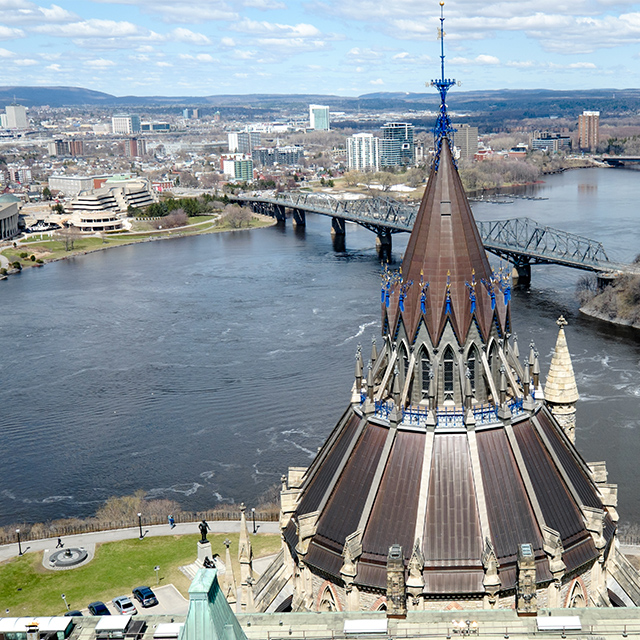 Parliament, Pinball, and Poutine in Ottawa: An Insider’s Guide to Canada’s Capital 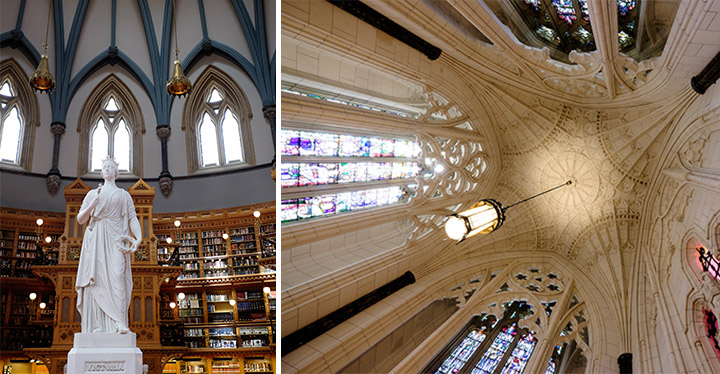 Get a good look (and a better neck stretch) with the impressive archways of Gothic Revival architecture.

Ottawa is Canada’s capital, and the imposing Gothic Revival Parliament buildings should top anyone’s must-see list. Tour guides lead you through the sturdy limestone halls where laws are enacted. The observation deck of the 302-foot Peace Tower offers stunning views in all directions. Back on ground, the summertime Changing of the Guard ceremony, with bearskin-hatted soldiers marching in precision, impresses all ages. On Wednesdays, a huge yoga session meets on Parliament’s front lawn (bring your Lululemons and join in).

Your cram course on government preps you for the next stop, Rideau Hall. It’s the residence of Queen Elizabeth’s Canadian representative, the Governor General. Tour the magnificent public rooms where diplomats present credentials and award national medals. Here, you can picnic beneath a canopy of 10,000 trees (many planted by visiting dignitaries), catch a weekend cricket game, or skate with locals on the public outdoor rink each winter. 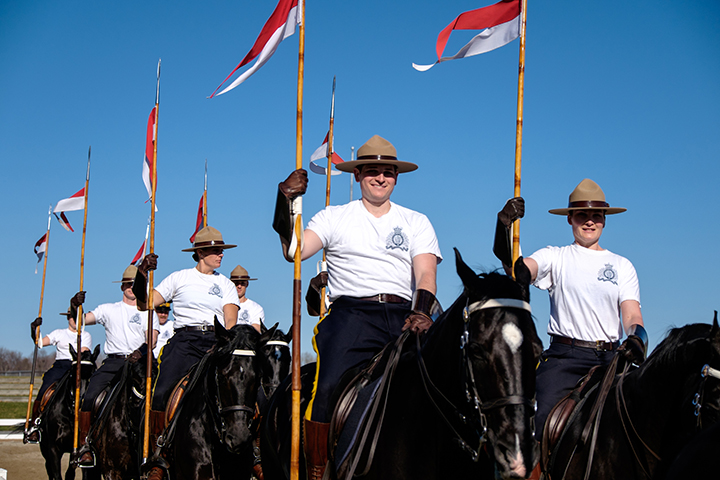 Just a few minutes’ drive from Rideau Hall is another iconic Canadian attraction, the stables of the Royal Canadian Mounted Police Musical Ride. The members of this famous horse show tour extensively each summer, but if they’re in town, you can meet the riders—all full-fledged Mounties—and their magnificent black thoroughbreds.

Ottawa boasts more museums than any other Canadian city. The national government runs the big ones, such as the Canadian Museum of History and the National Gallery of Canada. But more specialized museums are also worth a visit. At the Canadian Aviation and Space Museum, for example, learn about Canada’s role in aviation, climb aboard a flight simulator, and fly in a 1939 open-cockpit biplane.

Seeking something more active? The Rideau Canal, a UNESCO world heritage site, is a year-round playground. In winter it’s the world’s largest skating rink; locals even skate to work. In spring, Ottawans stroll its banks to admire some of the city’s million tulips, a thank-you from the Netherlands for shielding its royal family during World War Two. (A hospital maternity ward was briefly ceded from Canada so Princess Margriet could be born a Dutch citizen.) In summer and fall, cyclists take over. Can’t bring your bike to join in? Don’t worry. RentABike has you covered.

Further afield, 370 miles of recreation trails snake through the capital, drawing joggers, cyclists, cross-country skiers, snowshoers and just plain walkers. Especially popular are those hugging the storied Ottawa River, where you can check out municipal beaches, a Saturday night reggae party, or a river garden of balanced rock sculptures assembled each spring by artist Jean Felice Ceprano in the roiling Remic Rapids. They evoke Inuit inuksuks in their spiritual simplicity, and offer a terrific picnic spot.

The semi-adventurous can run those rapids on a Class II and III whitewater rafting trip. This unique sightseeing adventure through the city core produces just enough adrenaline to thrill first-time rafters. (Those needing a bigger rush should check out several companies, such as OWL Rafting and RiverRun, which offer Class IV rafting trips about 125 kilometers upstream.)

Prepare yourself for innovative cuisine and shared plates at two six {ate}.

EAT AND DRINK WHERE THE LOCALS DO

Not long ago, Ottawans dined out on bland English meat-and-potatoes or artery-clogging French sauces on everything. A wave of young, cutting-edge chefs has changed all that.

Consider Steve Harris, whose eatery two six {ate} is one of the hippest in town. Reclaimed barnboards and industrial lighting provide the backdrop for playful, nose-to-tail cooking. Favorites include chickpea gnocchi with tofu Alfredo and duck and foie gras pogos.

Culinary passion and local suppliers are also the hallmark of The Buzz, where the Malay spiced lamb shank is a must; Supply and Demand, for sustainable seafood; and Art-Is-In Bakery, where locals queue up in droves for sandwiches on the bakery’s artisanal breads. (You won’t go wrong with the buttermilk-brined pulled chicken Caesar.)

Skip the same ol’ ketchup and swap in gravy and cheese curds for a delectable bowl of poutine at Pataterie Hulloise.

Don’t leave Ottawa before tasting both poutine and a BeaverTail. Poutine is to Ottawa what hot dogs are to Coney Island: iconic. The concoction of French fries, gravy, and cheese curds can be found at ubiquitous chip wagons parked on downtown streets, or at sit-down Pataterie Hulloise. For many office workers, poutine is lunch.

With flavors like the straightforward Chocolate Hazelnut and not-sure-what’s-in-it-but-it’s-gonna-be-good Avalanche, you must leave room for a BeaverTails delight.

Equally delicious (and equally not-the-most nutritious) are BeaverTails pastries, a slab of fried whole-wheat dough topped with sweets like maple butter or cinnamon, sugar, and a squeeze of lemon. Developed in Ottawa, the treat is now sold from Cedar Point, Ohio to Busan, S. Korea. Visit their flagship location at 69 George St.

Tops among more edgy venues is House of TARG, a basement club where a line-up of independent and underground bands (from punk and grind to country and jazz) is surrounded by a raft of old-school pinball machines and a kitchen that dishes out the tastiest pierogies you’ll ever eat. It’s owned by local musicians and recording engineers who really know their stuff.

Equally knowledgeable is Paul Symes, whose Black Sheep Inn lies about 30 minutes north of Ottawa, but packs in a steady and loyal clientele for internationally known folk, alt-country, and art rock performers.

Adorit owner Emma Inns brings an authentic vibe from India and China to a small shopping district in Ottawa.

TO MARKET, TO MARKET

The historic ByWard Market is an eclectic shopping district with something for everyone—from cheap tourist souvenirs to haute couture. But head to Adorit for affordable one-of-a-kind clothing, jewelry, and accessories, handmade from recycled materials and eco-fabrics. Owner Emma Inns, a former travel guide in India and China for tour operator Intrepid, is so committed to social justice that she’s set up several micro-finance projects in Tibet.

Independent Canadian designers are front and center at Workshop Studio and Boutique, where the prêt-à-porter styles of designers like Annie 50 and Melissa Bolduc jostle with the jewelry that Anne Tranholm crafts from recycled skateboards.

For upscale Canadiana—soapstone carvings, maple leaf pins, Newfoundland pewter bowls—check out The Snow Goose. And if art’s your thing, head to the near west-end neighborhood of Hintonburg, where numerous funky galleries along Wellington Street West offer patrons a wide range of creativity.

Think big at Chateau Montebello, the world’s largest log cabin and your ideal place to catch some z’s at the end of the day.

Ottawa has lots to offer. But, hey, you’ve got a car—so use it to explore the area. Outlying communities attract locals with a profusion of artisans making everything from mustard to metal work. Especially worth the drive are Merrickville, Wakefield, Almonte, and Perth, none more than an hour away.

Lively Montreal beckons with its world-class cuisine and cultural flair. Boat tours of the Thousand Islands (okay, 1,864 islands, to be precise) glide you through the most picturesque section of the St. Lawrence River. Finally, pretend you’re one of the rich and famous at the Chateau Montebello, an upscale resort where the G7 leaders once gathered in the world’s largest log cabin. Its wilderness property, with golf courses to deer hunting, is bigger than Manhattan.

Yeah, Ottawa’s no fun at all.