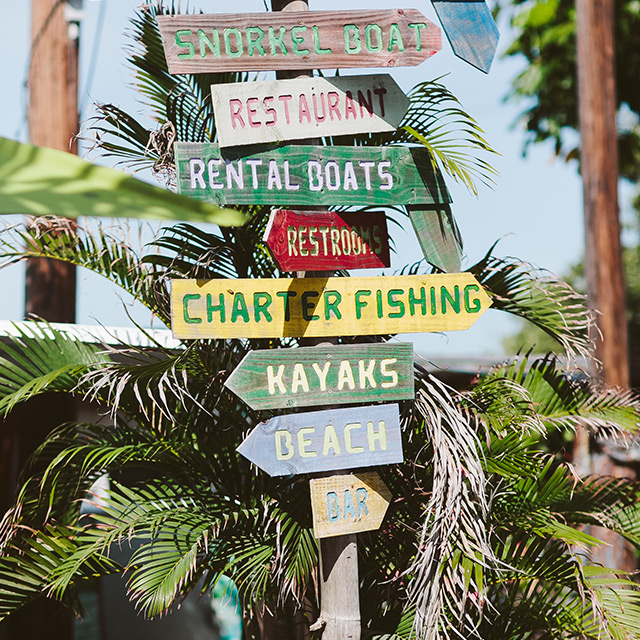 About halfway between the booming metropolis of Miami (2 hours away by car) and the southernmost point of the U.S. is Islamorada (pronounced “eye-lah-morada,” for those of you who took French in high school). Known as the sportfishing capital of the world, this tropical village of four small islands charms with its anything-goes, laid-back appeal, making it perfect for a daytime trip.

Art comes in all shells, shapes, and sizes at The Rain Barrel, from Big Betsy (left) to painted tiles (right).

Instead of exit ramps, people find their way here by following mile markers (or MM) along the Florida Keys Overseas Highway. The mile marker signs start at MM 100 in Florida City and end at 0 in Key West. Islamorada stretches about 20 miles long and about two to three blocks wide, so start your adventure at MM 86 outside The Rain Barrel. When you pull up to this breezy arts and crafts village of shops, you’re greeted by “Big Betsy.” The giant crustacean sculpture is said to be the most photographed regional landmark after the southernmost point in Key West, making it perfect for a shellfie (er, selfie). Then head inside The Rain Barrel and browse the collection of island-themed tiled paintings, seashell windchimes, and hammocks.

Make like Flipper for a splashtastic swim at Theater of the Sea.

SWIM WITH THE FISHES (SAFELY)

With its spewing fountains and dolphin statues, it’s hard to miss Theater of the Sea, a longtime marine mammal park that opened in 1946 and sits right off the highway at MM 84.5. Inside the 17-acre park, visitors can swim with dolphins, stingrays, and sharks—or stay dry and just watch them hang out in their lagoons—as well as peep at sea lion and parrot shows. General admission fee is $31.95 for adults, but note that this doesn’t include the swim-with-wildlife fees. Pro tip: It can take a few hours to take in the whole park, so budget your itinerary accordingly.

Hemingway’s boat (or its replica, pictured here) isn’t for sale, but you’ll find plenty to pick up at World Wide Sportsman.

If sea theater isn’t in your repertoire, pull over at MM 81.5 to stroll inside the World Wide Sportsman. True to its aquatic theme, the parking spaces are lined with images of small sharks. This mega retail store sells Tommy Bahama shirts and shorts, fishing rods, and key lime taffy, but the big draw is the replica of Ernest Hemingway’s Pilar boat, which sits smack in the middle of the store. Shoppers can hop aboard the 1933 vessel and view pictures of the famed author and the original Pilar, as well as the kind of typewriter he used to craft his famous prose.

Grab a bucket and feed tons of eager tarpon at Robbie’s Marina.

A friendly local artist highly recommended making a quick stop at Robbie’s Marina at MM 77.5. In addition to the namesake marina, Robbie’s features a restaurant, shops, and jet ski and charter boat rentals. But what really hooks folks is the literal sea of tarpon just below the dock. For $1 a person and $3.30 for a bucket of bait, you can feed the jumbo-sized silvery fish, which jump out of the water under the watchful eyes of nearby hungry pelicans.

Islamorada has five beaches, some easier to find, and others that are a little off-the-beaten-track. You don’t need a library card to check out the accessible Library Beach Park, which sits behind the Helen Wadley Branch Library (MM 81.5). Locals and tourists picnic inside a big tiki hut, and sunbathe or swim in the clear tranquil waters of the Atlantic. Folks here like to plant their beach umbrella and chair in the shallow part and read as if this were their own private beach. Bonus: There’s free parking, too.

Farther down (MM 73.5) at the other end of the island is Anne’s Beach, which offers a nature walk and shady boardwalk with semi-private huts that face the beach. The water is shallow enough to walk several hundred yards out, where you’ll feel like you’re in the middle of the Atlantic. Find free parking here, as well.

DIVING INTO THE PAST

For a sense of history, follow the mural of two large whales outside the History of Diving Museum (MM 83) to learn about man’s 4,000-year journey of exploring the ocean’s depths. Inside, panels feature a collection of the first dive helmets and suits, and elucidate how Matt Johnston became the first ventilator-dependent quadriplegic to scuba dive while swimming in the Keys.

To get a better sense of how the Keys became what they are today, the Keys History and Discovery Center (MM 82) takes visitors back in time to when Henry Flagler introduced his railroad to connect the islands in 1912 and the Overseas Highway opened the Keys up to cars in 1928. There’s also a touchscreen monitor where visitors can look up famous visiting fishermen, such as former Red Sox player Ted Williams and President Herbert Hoover.

Fin-ish your trip with a stop at the legendary Lorelei Restaurant and Cabana Bar.

To fuel up for the drive back to mainland, visit the Lorelei Restaurant and Cabana Bar (MM 82). This popular waterfront stop serves tasty fish and cracked conch sandwiches. Not sure where to go? Keep your eyes peeled for the unmissable image of a giant blonde mermaid.

Or, kick back at Marker 88 for a final refreshing marine meal before heading mainland.

As an alternative last stop, visit the aptly named Marker 88, where diners can sit in tables that rock back and forth on beach sand. For those not driving, recommended drinks include the rum-infused Hemingway Cocktail and the coconut-flavored Skinny Colada, which pair perfectly with grilled mahi sandwiches and pasta with fresh shrimp.

Want to mix the mainland into your Ziptrip? Be sure to check out our local’s guide to Miami proper, too.