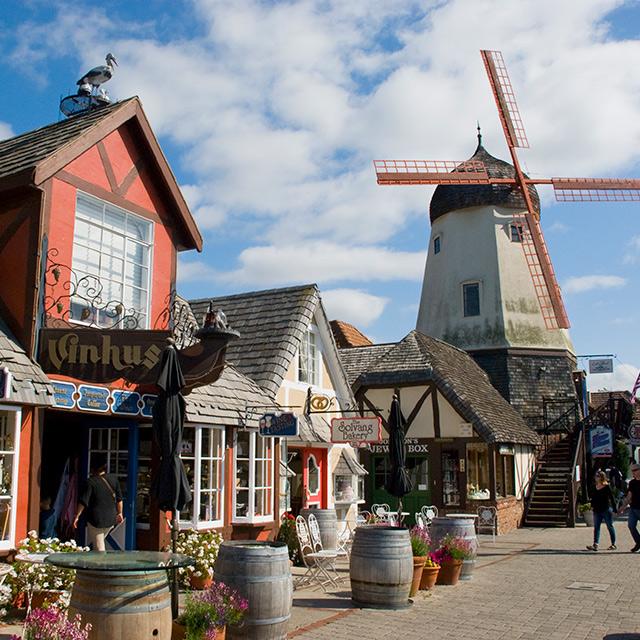 Describing any place—be it a restaurant, building, or even an entire neighborhood—as “European” in North America suggests a transportation to (if briefly) a faraway land. Experiencing European culture here in the New World is possible, though. Place yourself in a true old-world milieu at these 6 stray-worthy, little-known locales that will make you feel like you’re on a European escape, even if it’s just a car ride away.

You wouldn’t be blamed if you felt everyone’s provenance was Provence when you saunter through the decidedly French Québec City. While its bigger and more well-known cousin Montréal marks its 375th anniversary in 2017, Québec City boasts an original founding 34 years earlier, in 1608. In fact, the original fort built by French explorer Samuel De Champlain still exists on the site of the city’s founding.  Today Québec City is the only walled city north of Mexico City, hearkening back to a more medieval time in Europe when nobles ruled in exchange for citizens’ safety.  In addition to its rich history, the people of Québec City are proudly French and insist on the continuation of French culture and language in a country that is officially bilingual.

When you arrive, you’ll find a kind of Parisian charm in Old Québec that inhabits the original fort established as a trading post along the St. Lawrence River. Noted as a “foodies’ paradise,” gastronomic pleasures are abundant including authentic Québec cuisine at restaurants like aux Anciens Candiens, serving fare inside a home built in 1675.

While traveling north in the fall or winter may seem counter-intuitive, this Canadian center knows how to do the cold season right. Christmas and New Year’s take on a special and glorious bedecking, but the real to-do is the annual winter celebration, Carnaval de Québec. The three-week-long event includes parades, games, and general snow-themed merriment. It’s kinda like Mardi Gras—just with parkas and mittens!

It's All Greek to Me

Florida’s gulf coast city of Tarpon Springs would be right at home on the Aegean Sea.

On the east coast of Florida along the Gulf of Mexico, you might be surprised to find yourself feeling more like you’re vacationing on the Mediterranean. In fact, Tarpon Springs is home to an active Greek community built when immigrants from the Dodecanese islands, uniquely skilled free divers, arrived to work in the then burgeoning sponge harvesting trade. Today the “sponge docks” operate on a very small scale, but the Hellenists still grow and thrive. Take an odyssey to the area closest to the water, which is reminiscent of the Greek Isles.  Best of all, enjoy the Greek culture of hospitality and hearty cuisine. In addition to our favorites like baklava and spanakopita, stop into Hellas Bakery, which offers lesser-known treats such as tiropita, diples, and tsoureki. Be brave, Odysseus, and let fortune favor your taste buds.

The warm and welcoming Norwegian enclave of Poulsbo, Washington celebrates (and belies) its roots with an equally fun and kind Viking Fest.

Seafaring traditions find their way across many regions, and no seafaring European was more feared than the Vikings. Today we call them Norwegians, and less than 90 minutes from Seattle sits the city of Poulsbo, Washington. You’ll know you’ve arrived when greeted by a sign that says “Velkommen til Poulsbo” beneath a ten-foot tall statue of “The Norseman,” replete with sword, beard, and a helmet with horns. (Which, incidentally, the Vikings never actually wore.) The small village mixes its Norwegian history with its local fishing industry, and not to miss is the weekly Stua Kaffe put on by the Sons of Norway, a buffet luncheon featuring authentic Norwegian fare.

Not Nordic enough for you? Then mark your calendar for the annual Viking Fest, held every May to celebrate Norway’s Constitution Day.  The event consists of a carnival with rides and games for the whole family, parades, Norwegian fare, and a Lutefisk eating contest. Despite the Vikings’ fearsome reputation, today Poulsbo sits as a quiet and wonderful escape from busy city life with the warmth and connection that Scandinavians are known for.

On Your Denmark, Go!

Travel to another Nordic land much further south by way of Solvang, California. Nestled in the winery-laden valley of Santa Ynez, just north of Santa Barbara and about 2 hours from Los Angeles, this hamlet is known as “The Danish Capital of America.” (The people, not the pastry.) An influx of immigrants from Denmark in the late 19th and 20th centuries looking to establish a Danish colony took hold in the region and with them came Danish culture.  In Solvang today, Hans Christian Andersen holds an esteemed presence with a museum and park dedicated to him. Stop in during the Solvang Danish Days festival, which includes an æbleskiver eating contest, which is a kind of puffy pancake. (It’s delicious.) For another taste of Danish culture, attend the holiday season’s magical Julefest. Pro- tip: Pronounce the “j” in Julefest the way the Danes do as a “y”, and you’ll feel like less of a tourist.

The Trapp Family Lodge, established by “The Sound of Music” family von Trapps, complements the Austrian and Bavarian character of Stowe, Vermont.

Visitors to Stowe, Vermont find that the hills are alive at all times of the year with views befitting an Austrian village. While there are plenty of ersatz Germanic towns one can discover, Stowe’s biggest claim to Euro-authenticity lies with the Trapp Family Lodge, established and still run by none other than said movie musical’s nominal family, the von Trapps.

Beyond the lodge, much of the village of Stowe exhibits an Austrian and Bavarian sensibility. Summer and fall are perfect for mountain hikes and picnics, while winter and spring offer outdoor adventures including some of the best downhill and cross-country skiing on the east coast. This fall, mark your calendar for Stowe Oktoberfest, which includes a traditional tented celebration complete with authentic Bavarian foods – with a local Vermont twist, of course.

Tangier Island, Virginia sits in the Chesapeake Bay and is accessible from ports in Virginia and Maryland. Renowned for its crab industry and therefore its crab cakes, the residents of Tangier harbor a life as slow as the river Thames and keep the modern world at bay. They’ve done well over the centuries keeping things as they are and that’s why their unique dialect sounds closer to their 16th century forebears than to American English as we know it today.

While some claim the dialect itself is a good representation of how early American settlers spoke, others believe it’s simply the Island’s long separation from the mainland that has allowed the cultivation of a unique lingua franca. Regardless of its origins, a walk down the very small streets will have you feeling like you stepped back in time to colonial days. The opportunity to hear this rare dialect may be disappearing, however, as technology has given locals much more access to the rest of the world.

That’s not the only threat, however. As climate change brings sea level rise, the island is predicted to lose habitability before the middle of this century. A visit here brings with it not only a chance to hear a dialect reminiscent of jolly old England, but an opportunity to experience the land while you still can.

A visit to any of these spots will certainly satisfy your craving for Old World culture. The best part? Many are only a drive away from your city. Bon Voyage!