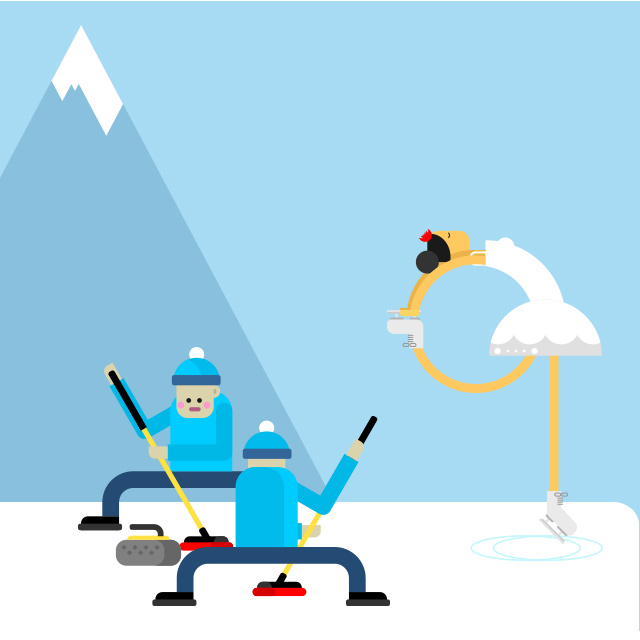 Skiing half pipes, barreling downhill in a bobsled, and leaning into turns on a luge... beginning on February 7, the world will be watching world-class athletes defy gravity at the Winter Olympics 2018 in PyeongChang, South Korea. But could you ever really see yourself in their shoes? The next time you get that itch to channel your inner Olympian, here are six ways you can put your spirit into action.

Some of the Winter Olympics' most popular sports include snowboarding, ice skating, and curling.

The world will catch the premiere big air snowboard event in PyeongChang. And where you might not be able to wing death-defying aerial moves at your local ski resort, you can find some daring terrain parks to practice your jumps. A less than three-hour drive from Chicago and only two from Iowa City, Chestnut Mountain has been on Transworld Snowboarding Magazine’s top-rated midwest snowboard parks list for three years running. The largest terrain park of its kind in the region, it lets you test your mettle on the 475-foot vertical drop, 3,500 feet of picturesque slopes, plus 25 rails and features. Save time for the indoor pool, sauna and Jacuzzi in your après-ski plans.

2. Get Mental in a Game of Curling, Team USA Curling Clubs

Don’t let its simplistic looks fool you. Known once upon a time as a “roarin’ game” for the sound of granite as it travels over ice, curling has been called a game of strategy, tactics and skill. Dating back to 19th-century Scotland, it’s making quite a comeback. In 2016, the World Curling Federation celebrated its 50th anniversary. The sport—played on ice with a 42-pound stone and a broom—has a following of more than 165 member clubs in roughly 43 states across the United States. If you’re in Texas, get lessons with Lone Star Curling in Austin for just $20 all throughout February. And in Houston, sign up for Olympic Intro to Curling sessions on Fridays and Saturdays. Take a lesson or join a league. You’ll understand why it took champion Tabitha Peterson two decades to train for Olympic-level competition.

3. Tackle the Triple Axel with the Pros, Learn to Skate USA

Whether it’s the choreography on blades or the technical feats that attract you, it’s never too late to learn how to master the ice. And with fully supported programs by U.S. Figure Skating, USA Hockey and US Speedskating scattered across the U.S., you are not short on options. Learn ice dance to hockey basics and even synchronized skating. In Boston, head to the third-oldest figure skating club in the United States, the Skating Club of Boston, which has several campuses throughout the metro area. Learn to skate, take kids to vacation clinics, or come to catch the longest-running ice carnival in the world.

Slide into victory on your skis, bobsled or luge this season.

4. Crank Up Your Calf Muscles on a Luge, Muskegon Winter Sports Complex, MI

With origins in 16th-century Switzerland, luge is one of the oldest winter sports. Athletes lie on their backs on a tiny sled, feet stretched out in front, and race down an icy track at about 85mph—without brakes. What’s the trick to steering? Performance relies on calf muscles to flex the sled's runners or exerting opposite shoulder pressure to the seat. Intrigued? If you’re eager to luge like an Olympian, visit Muskegon, Michigan where you’ll find one of only four luge tracks that exist in the United States. Just a few hours' drive from Detroit, Ann Arbor and Chicago, the 850′ track has six curves, and was designed by three-time Olympian Frank Masley. Though your ticket comes with all necessary equipment, including an Austrian or Latvian sled, helmet, and forearm pads, be prepared to carry the 30- to 40-lb sled to the top of the track yourself.

In the late 1860s, vacationers created bobsledding out of boredom in the dead of winter. One story credits the marketing genius of a hotelier who convinced guests to try this winter activity in an otherwise quiet St. Moritz resort. It quickly became known as “bobsledding” thanks to early racers bobbing their heads back and forth for pull. It didn't work, but the name stuck. The original wooden toboggan is now a steel one that grips about 15 turns down a course. At top speed, the pressure an athlete feels around a curve is nearly four times that of gravity. Have the need for speed? If you’re in upstate NY or lower Canada, you’re in luck. About a two-hour drive from Albany or three hours from Ottawa (and a road trip from Manhattan), you can have the ultimate bobsled experience at Whiteface Mountain in Lake Placid. The only condition? Be 48” or taller and hold on!

Olympic cross-country skiing is a lengthy competition with races dragging on for over two hours, and events spanning all 15 days in PyeongChang. There are six formats (Individual, Sprint, Team Sprint, Skiathlon, Relay and Mass Start) and two techniques (classical click-and-glide and freestyle “skating”). The NYT says “Cross-country skiing is the least glamorous, least pyrotechnic, least watchable of the major Olympic sports. It is notoriously, almost inhumanly, exhausting — a brutally sustained nonthrill.” So if you’ve got stamina, the self-punishing grind kind, Royal Gorge is waiting for you. Under three-hours drive from San Francisco, get endless hours of crushing cardiac exercise on 92 trails across 6,000 acres. With it comes the peace of sweeping views of the Northern Sierra and some of the most majestic peaks in Tahoe.