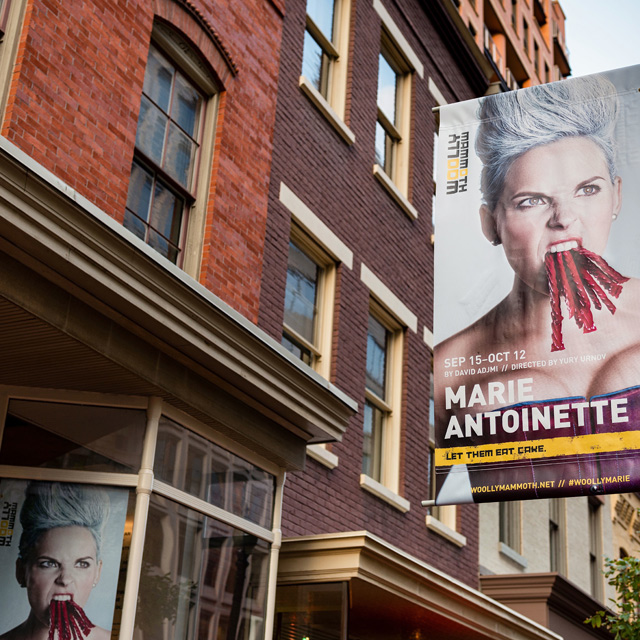 Scan the listings for theatre events in town, and it’s not likely you’ll find a blurb about zombies, Marie Antoinette, or puppets enacting famous death scenes. But if you do happen upon such a description, you’re in luck — because you’re in the vicinity of D.C.’s famous Woolly Mammoth Theatre.

At the head of the Penn Quarter non-profit theatre company is Howard Shalwitz. The artistic director and co-founder prides himself on producing plays that are edgy, unique, and — most importantly — thought-provoking (while still making sure that even novice theatregoers feel welcome).

Now entering its 35th season, Woolly Mammoth continues to do things differently, like offering “Pay-What-You-Can” nights and “appetizer” demos of future works taking place during the year. We sat down with Howard to delve into this quirky mainstay of D.C. entertainment — which the New York Times called “Washington’s most daring theatre company” — to learn about the group’s history, plus upcoming sure-to-be hits.

Zipcar: What makes Woolly Mammoth Theatre different from other theatres?

Howard: At Woolly, I think we’re taking risks on provocative new plays that most other theatres in the city and in the country won’t take. We want people to leave Woolly feeling that they’d had an experience that is something original and different and fresh, one that asks them to think about something or look at something in a new way, so we’re focusing on younger and mid-career American playwrights. We’re also helping to develop the work of a lot of major American playwrights, and a lot of plays that premiere here get produced in other theatres all around the country and in some cases, all around the world.

Nothing to do this weekend? Not likely, when it comes to Woolly Mammoth's off-beat offerings this season.

What is the performance you’re most excited about in the upcoming season?

Well, I’m always most excited about the show that’s coming up! It is a fantastic season though, so I don’t know if I could pick just one.

I’m directing the play at the end of the season, called “Zombie: The American,” by Robert O’Hara. His stylistic inspiration is Dr. Strangelove by way of Jacobean tragedy, but it takes place in the future, and it’s about the first gay president of the United States in the year 2063, which is of course 200 years after the first Civil War. He’s facing a possible succession from part of the country and now Africa has become the major superpower, so there’s pressure from them, too. He decides to turn to the only weapon he feels can help solve these problems: the zombie council in the basement of the White House, who control all the zombies waiting to be released.

Do you do any previews or rehearsals before the show goes up?

There are a few opportunities next season for people to get a glimpse of our work in progress. We have a little festival called Appetizers (the theme of the season is “Let Them Eat Cake!”). It’s three nights, but it’s a night devoted to each of the last three plays in the season where we’re going to share some scenes and some films that have inspired us in working on the piece. We’ll talk about some of the issues we’re using to frame the play, really give people an inside glimpse of how we work in thinking about a play in progress.

At Woolly, we’re very conscious of the fact that we have some audiences who have a lot of theatre education and some audiences who have none, but we have fun bringing them both over the hurdle. We’re also doing everything we can to make it easy for people financially in terms of “Pay-What-You-Can” nights, which attract very young audiences, and we have Stampede Nights where people can get tickets for fifteen, twenty bucks. We never want price to be a barrier, so we have enough different price points so anyone can really afford to come to Woolly. I think that’s part of the reason we have one of the youngest, most diverse audiences of any theatre in Washington.

So how do you and the rest of the Woolly Mammoth crew use Zipcar?

Zipcar is essential for us. We pick up out-of-town artists at the train station or the airport all the time, but most importantly we use it for shopping. Our props department and our scenic folks will grab one and go out to Target or Lowe’s or even some second-hand store if they’re hunting for some exotic, forgotten prop or something and disappear for hours.

It also helps us to get to parts of the city we can’t access by Metro. We’re downtown, so most of us don’t drive in and have our cars here. It’s a lot easier to just go around the corner (because it is around the corner from us!), and get a Zipcar for a couple hours and do what we need to do that way.

D.C. has been a city that’s seen massive change over the past 35 years. How has that affected the theatre scene in the city?

Woolly was part of a wave of new theatre development that happened in the late 70’s/early 80’s that included Woolly Mammoth, Studio, Source, the Gala Hispanic Theatre, and many other theatres. And that whole 35 years that Woolly has been around has also been an explosive growth period for Washington in general.

I think theatres have often led the charge into moving into neighborhoods, like the 14th Street Corridor before others were comfortable moving there. Theatres play the role of urban pioneers.

We played that same role here downtown. The big event was the Verizon Center, but the role that the Shakespeare Theatre played and then when we opened up — all of a sudden you had major restaurants popping up all around. It always seems to go hand-in-hand, theatre and other kinds of development, and we’re happy to play that role!

What makes live theatre such a different experience than, say, watching a show on television or going to see a movie?

The idea of story and what the role of story is in terms of theatre and something like television is very different, and the visual aspects of television and film are very different from theatre. But theatre at its best — if I can just reduce it to simple terms — is theatrical. That means it’s somehow taking advantage of the live connection from an actor and an audience in a live space.

Inherently, it’s more active; we’re all there together.