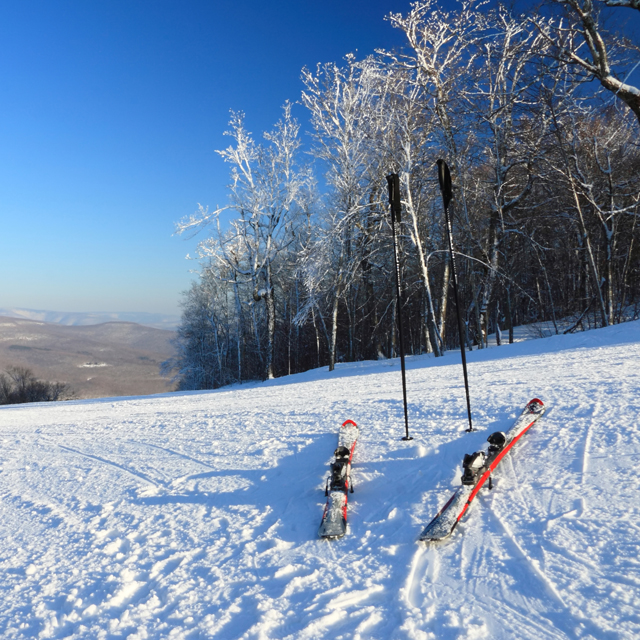 Chilly climes bringing you down? Skiing and snowboarding can help cure the winter blues. But the biggest mountain isn’t always the best bet if you want to take a casual trek downhill (or stay within the 180 miles/day included in your Zipcar reservation). Shred the pow(der) at these peak picks for easy day trips from the city. Bonus: you can book a Zipcar equipped with Yakima ski racks for an even easier outing.

Named after the Algonquin word for “The Great Hill,” Wachusett is the highest peak in Massachusetts east of the Connecticut River. At just over 2,000 feet, the summit’s panorama includes the Boston skyline. Groomed trails offer gentle intermediate skiing that’s family- and beginner-friendly. With 26 runs, 100% snowmaking coverage, and 110 skiable acres, Wachusett is a quick fix for some time on the slopes. Bonus: Save money with our $10 discounted Bring a Friend lift ticket package, and get $10 in Zipcar driving credit. (More money to spend on cocoa!)

Groomed, pristine trails are waiting in the Catskills, less than 3 hours’ drive from Manhattan’s buzzing streets.

The Hamptons have summer houses, the outer boroughs have golf courses and beaches. But for alpine adventure, New Yorkers need to head a little further. Not too far, mind. Pick up a Zipcar in Manhattan and you could be wrapped in the cozy charms of Scribner’s Catskill Lodge in just 2.5 hours. This sleek, modern ski lodge is tucked within 20 acres of mountainside and sits prettily opposite the groomed trails of Hunter Mountain. You’ll feel a million miles away from the frenetic city streets. Bonus: New Zipcar members get $35 driving credit towards their trip to Scribner’s Catskill Lodge. Keep an eye on @ZipcarTriState Twitter feed for details of free packages being given away throughout the season.

Ontario’s largest mountain resort has 365 skiable acres, 43 trails, and postcard views over Georgian Bay and the Niagara Escarpment. It’s safe to say that Blue Mountain is a winter activity wonderland. Freestyle boarders test skills at Badlands Terrain Park, while beginners can learn on a gentler, separate course. Also new in 2018: an ice skating loop at the top of the mountain. Other ski/board alternatives include snow tubing, snowshoeing, and even a mountain coaster that descends 3,300 feet of track. Finally, retreat from the cold with a soak in hot tubs and indoor pools in the aquatic center.

Known for long runs and fast lifts, Whitetail offers varied terrain and the steepest vertical drop near D.C. and Baltimore. Intermediate trails run the full 935-foot vertical, while experts can rock black and double blacks, including the Mid-Atlantic’s finest mogul run. Natural snowfall is limited, but snowmaking on all 23 trails makes up the difference. The mountain’s eastern face helps keep snow from turning to ice, a concern at this latitude. Two terrain parks and 16 snow tubing lanes are popular with boarders and families respectively. Convenience draws crowds, so expect plenty of waiting in lift lines. Opt for the eight-hour ticket, which is just $5 dollars more than the four-hour.

Image courtesy of Silent A Photography.

Opened in 1961, Homewood Mountain Resort remains one of Tahoe's classic family-friendly resorts with an unbeatable peak to shore experience. Named the "gem of Lake Tahoe's West Shore" by SKI Magazing, the 1,260-acre mountain offers unobstructed views of the entire Lake and surrounding peaks and features 8 lifts and 67 runs with over 750+ acres of guided snowcat accessible terrain. Homewood offers truly unique four-season resort with flawless grooming, hidden powder stashes, unique apres ski and an intimate West Shore setting located just steps from Lake Tahoe. Bonus: ZIpcar members get up to 40% off lift tickets any day during the 2018/19 winter season! Plus, keep and eye on @ZipcarNorCal Twitter feed for details of free packages being given away throughout the season.

On its 80th anniversary, Wilmot—now owned by Vail Resorts—greeted skiers with $13 million of improvements, from state-of-the-art snowmaking on slopes to Wi-Fi at the modernized base lodge. The resort also upgraded its lift capacity by 45 percent, which means more time on 23 trails and 120 skiable acres, including an expanded terrain park. Wilmot gets even better for newbies with a dedicated children’s ski and snowboard center, and re-graded learning terrain with two lifts for easy access. Best of all, first-timers earn free equipment upon completion of a multi-week ski and snowboard school.

Denver is surrounded by snowy peaks. Zip to Echo Mountain, just a short drive from the city.

Denverites are spoilt for choice when it comes to mountains—their snow-hatted peaks are visible from pretty much anywhere in the city. Echo Mountain wins on distance alone, being less than an hour’s drive from Denver’s downtown. Its 60 acres of skiable areas include a huge beginners’ area and a tubing hill (so even non-skiers can have fun whizzing down the snowy slopes). It’s also known as one of the most affordable areas for skiing and snowboarding, so it’s a win-win, really. Zipcar’s partner offer also means members get four ski lift tickets for the price of three, saving $55, plus $35 driving credit. Who’s ready to hit the slopes?

Washington’s largest ski resort is nestled within Mt. Rainier National Park, and invested $5 million in snowmaking equipment for this season. Intermediate skiers have plenty of terrain to cruise—more than half of Crystal Mountain’s 57 runs are squared blue. Survey the action on the Mt. Rainier Gondola with stunning views of the Cascade Range while ascending 2,500 vertical feet to the Summit House restaurant, open to non-skiers, too. For those staying overnight, a new Snowshoe & Sip series combines the best of snow play and après with samples from breweries or wineries.

When it comes to primiere ski destinations in North America, Whistler Blackcomb takes the gold medal.

Host of the 2010 Winter Olympics, Canada’s most famous ski area earns an avalanche of accolades. SKI Magazine ranked Whistler Blackcomb the #1 North American resort for a third year in a row, and it also snagged top honors for terrain variety and off-hill activities. Blessed with an average annual snowfall of 400 inches, the two mountains combine for a stunning 8,171 skiable acres—the most in North America—and 200 trails, good for bronze. On sunny days, Whistler shines with better views and open bowl skiing. Blackcomb trails run steeper and through woodlands, so in wintry weather the trees offer some protection.