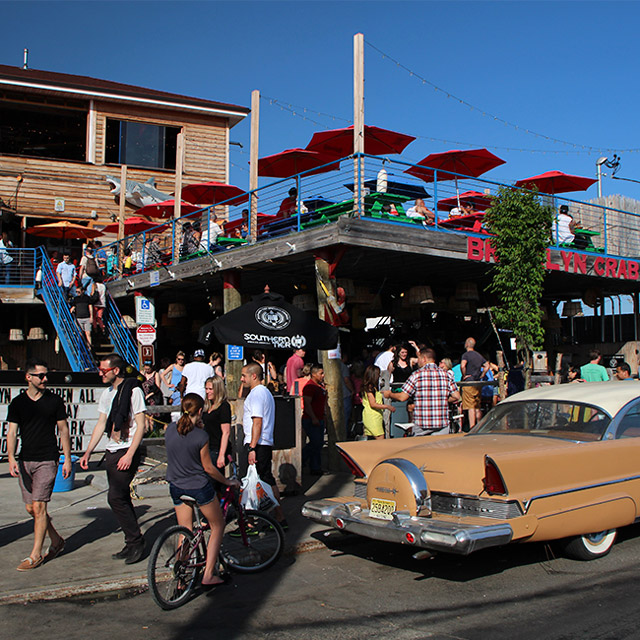 The Coolest Brooklyn Neighborhoods You’re Not Sick Of Hearing About: A Guide to Red Hook and Gowanus

Brooklyn is the go-to example of a hip, revitalized locale. But while the comparison may be overused, plenty of this developing borough is not.

Whole neighborhoods—like Red Hook and next-door Gowanus—are still on the cusp of transformation. Bouncing back from a faded industrial-waterfront past, they’re brimming with plenty of new, quirky corners to explore. (AKA, you can say you knew about them first.)

How does a working class area earn some prestige points? By landing a Fairway Market. This destination supermarket won “Best Neighborhood Catalyst” from the Municipal Arts Society of New York in 2007. Housed in a brick warehouse with arched windows and iron shutters dating to the 1860s, Fairway has an indoor/outdoor patio overlooking the water and a lone trolley car from a failed revival project.

Load up on fresh eats before a heated game of mini golf at Brooklyn Crab.

Right across Fairway’s SUV-packed parking lot is Brooklyn Crab, a popular three-story seafood funhouse complete with mini golf, cornhole, and arcade games to keep you entertained while you wait. Request a table on the top deck to chow down on fruits of the sea amid breezy harbor views that ripen orange at sunset.

For dessert, get a citrus fix at Steve’s Authentic Key Lime Pies. What’s so authentic about key lime pie made north of the Mason-Dixon Line? (Wait, why are you questioning this? It’s pie!) But, in all seriousness, it’s the swoon-worthy ingredients: fresh squeezed key lime juice, Graham cracker crumb crust hand-formed in-house, pure butter, and cage-free egg yolks. Taste the difference with a mini-size 4” tart in a pan or dipped in Belgian dark chocolate on a popsicle stick (known as the Swingle).

But you don’t have to just sit back and take in the view (and the great tastes). From key lime pies to steel pie pans, you can torch ’n' forge your own at She-Weld’s blacksmithing classes, led by a female sculptor across the street from Steve’s.

It’s okay to feel smug when you find this unobstructed and un-tourist-ed view of the Statue of Liberty.

The street ends with a sight not to be missed. Tourists wait hours to get to the Statue of Liberty, but you’ll see her head-on without hassle from the scenic yet secluded Valentino Pier. The park hosts free screenings of outdoor movies with local food vendors on Tuesday nights in July and August. This is also the launch site to get splashy with Red Hook Boaters, a volunteer organization offering free kayaking Thursday evenings and Sunday afternoons through September.

Once you’ve taken in the view of Lady Liberty, enjoy the artistic sights of Valentino Pier and the neighboring repurposed warehouses.

Wanna board a boat without getting wet? A rare surviving wooden barge from 1914 houses the curious little Waterfront Museum, paying homage to Red Hook’s nautical past. Listed on the National Register of Historic Places, this showboat barge also hosts performances and the annual Pirate Ball fundraiser to keep the vessel afloat.

Discover more culture at a gallery space for contemporary art on paper inside a former haberdashery storefront from 1877. Kentler International Drawing Space is celebrating 25 years of showcasing paintings, photos, and drawings by artists both local and international.

Cuckoo for cocoa? Tour Cacao Prieto and then stop by Steve’s Authentic Key Lime Pies for a chocolate-covered Swingle.

Great food is culinary art, and small batch, handcrafted consumables are thriving in Brooklyn. Cacao Prieto makes chocolate bars and liquor sourced from organic cacao beans and sugar cane on a family farm in the Dominican Republic. Inside a beautiful building made from reclaimed Red Hook bricks, a retail shop, chocolate factory, and distillery tasting tours bring flavors of the Caribbean to Brooklyn.

Meanwhile, a warehouse on the water is an unlikely base for a vintner, but The Red Hook Winery manufactures and bottles on-site. Enjoy tastings of traditional and experimental wines made only from New York State grapes (while your driver keeps busy with a Cacao Prieto bar).

Still thirsty? Located between the winery and Brooklyn Crab is the good-time neighborhood dive Sunny’s. Like most of low-lying Red Hook, it got swamped by Superstorm Sandy’s tidal surge in October 2012 and struggled mightily to reopen. Stop in for a drink, admire the eclectic decor, and absorb the essence of off-beat Brooklyn that was almost lost forever.

Despite all the cool, indie businesses, Red Hook is most associated with IKEA. Outside the Goliath-sized superstore is Erie Basin Park, an esplanade dotted with sculptural maritime relics salvaged from a demolished shipyard that built important warships during WWII. Times have changed, and leftover loading cranes now stand motionless over a parking lot of frenzied furniture shoppers.

Not far from IKEA, Latin American food trucks serve authentic South of the Border specialties like tacos, tamales, elote, and pupusas. On weekends, the Red Hook Food Vendors converge at the corner of Clinton and Bay Streets near ball fields that attract recreational league athletes. It’s the food trucks, however, who are the stars, having collectively won four Vendy Awards since 2009.

Not everywhere in Red Hook is IKEA chic, so don’t let the boarded up windows above Defonte’s deter you. This old school deli’s massive heroes are considered some of the best (and largest!) sandwiches in the city. Founded in 1922 and still family owned, Defonte’s isolated inland location has spared it from the wave of gentrification sweeping Brooklyn. No matter what cold cuts float your boat—err, sub—add fresh mozzarella and fried eggplant, which are house specialties.

Further north and just over the Red Hook border, where Cobble Hill and Carroll Gardens meet the waterfront, the owners of Brooklyn Crab have another privileged perch to see the sunset. The roof deck of Alma has undeniably great guac, margs, and Mexican fare with postcard views of lower Manhattan skyscrapers, including the new One World Trade Center.

A MESS, A PLAN, A CANAL: GOWANUS

Continue the Brooklyn road less traveled with a stop in neighboring Gowanus, once home to paint factories, coal yards, tanneries, manufactured gas works, and chemical plants that discharged into an eponymous canal separating it from Red Hook.

Gowanus’s Superfund waterway won’t be cleaned up until the 2020s, but why wait? Paddle in PCBs and heavy metals while you still can with the Gowanus Dredgers Canoe Club!

Also awaiting decontamination is the eerie Gowanus Batcave, where teenage runaways once squatted. This abandoned transit authority powerhouse will rise again as an arts and education facility, but is off-limits for now. Even from the outside, it’s a powerful symbol of Gowanus’s industrial past and promising rebirth.

Already rehabilitated is Proteus Gowanus, a multi-disciplinary gallery space and creative gathering place inside a former box factory from 1900. A weekly Writing Society meets here for literary exercises open to anyone who can pick up a pen.

Shuffle on over to Royal Palms for games a-plenty, plus food trucks and live music for the noncompetitive.

GOWAN’ AND CHOW DOWN

Fairway put Red Hook on the map, and Whole Foods Market did the same to Gowanus. The only Whole Foods in Brooklyn features a DIY bicycle repair station, Etsy pop-up shop, and roof deck eating area with a beer and wine bar overlooking the canal.

For a classic Italian dinner, the red sauce at Monte’s has been flowing since 1906. This former speakeasy was once a hangout for mob characters and legendary musicians like the Rat Pack.

If there ever was a New York neighborhood you’d wanna drive to, Red Hook’s the one. Cut off from the subway and not yet within Citi Bike range, getting to Red Hook requires effort, and a subway-to-bus transfer is one step too many for need-to-be-there-now New Yorkers.

Driving to Red Hook has other perks—namely, trunk space to load up on groceries at Fairway or apartment fixings at the city’s only IKEA. An easy exit off the expressway, Red Hook has ample parking—but easy does it driving on those cobblestones!

Gowanus is also car-friendly. However, you may want to pop by the F/G subway stop at 4th Avenue to admire the Manhattan skyline from the highest elevated tracks in the city.

Not ready to be done with New York? Head over to Manhattan for a spin around Nolita or take a walk along the famed High Line. Or if you’re up for a day trip outta the city, New Paltz could be just the thing.

About the Author:
Jeffrey Tanenhaus is a Brooklyn-based writer, photographer, and tour guide. His New York City Essential Guide app is a hit with tourists. In his spare time, Jeffrey enjoys biking around industrial waterfront areas—especially to Brooklyn Crab for dollar oysters and $3 drafts on Mondays and Tuesdays.