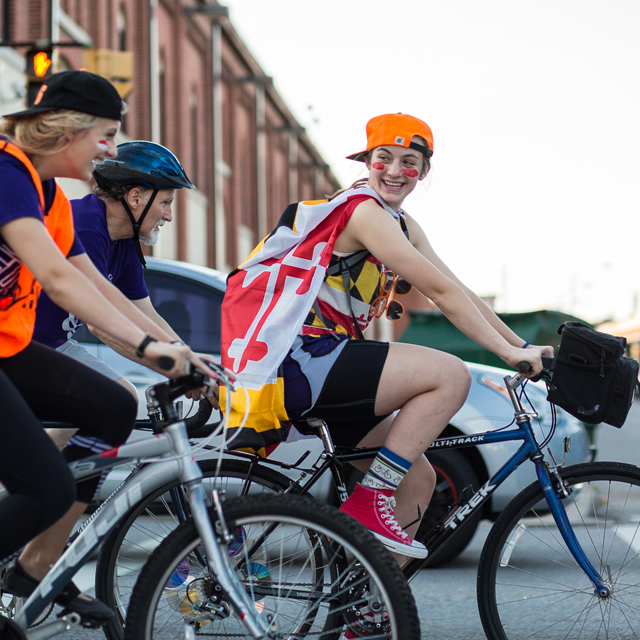 Baltimore For Beginners: A Newbie Guide to Charm City

Baltimore, Maryland—where I’ve made my home since moving from Austin, Texas, almost four years ago— has no shortage of weird, quirky, and charming idiosyncrasies within this very small-town-feeling city along the Chesapeake Bay. There’s no other place quite like it. While there are numerous tourist standouts like The Inner Harbor and downtown, it’s in the various eclectic neighborhoods, stoops, seafood shacks, art spaces, and dive bars that you can find the richest and most distinct Baltimore culture. Here are my favorite tips and insights from a veteran to a newbie about a town you’ll come to love and call home.

Don’t be afraid of purple, black, and orange.

You know it’s game day in Charm City when you roll up to the Royal Farms gas station (or “RoFo” and “The Farm Store,” as the locals call it) and you’re hit with blasts of purple and black, often flying from the roofs of cars or sewn into incredible gaudy cargo pants of a diehard Ravens fan. After nearly a two-decade playoff drought, the Orioles have had some recent success and it has re-energized the local baseball fan base. If you hear someone shout, “The Buck Stops Here,” it’s a reference to The Orioles’ storied manager, Buck Showalter.

M&T Bank Stadium and Oriole Park at Camden Yards sit side-by-side downtown, just blocks from the Inner Harbor and business district. In September, you can hit an O’s game on a Friday night and a Ravens game on a Sunday and experience full Eutaw/Russell Street pandemonium.

This ain’t Buffalo. Anything more than a dusting and Baltimore just about shuts down, so don’t expect to have to go to work or school (or anywhere) in the winter when a snow storm comes through. Instead, hunker down in front of your screen of choice in your row home and watch the Baltimore-based ‘80s flick, The Diner.

Make your first meal in Baltimore a plate of steamed crabs with a Natty Boh.

Everyone knows that seafood is kind of a big deal here. While the upscale New Englanders to the north enjoy their buttered lobster, Marylanders tear into steamed crabs smothered in Old Bay while throwing back a couple of National Bohemian beers or “Natty Bohs.”

Most tourists stay right downtown near the Inner Harbor and just walk over to Phillips Seafood for a meal. While their crab cakes are OK, you really need to venture a few miles outside of the city for the best Maryland-style seafood. Jimmy’s, an old joint in the southern tip of the city near a suburb called Dundalk, has the best steamed crabs in the area. The dining room has a stodgy, ‘70s cruise ship vibe, while the bar is often raucous and filled with South Baltimore’s finest. If you want something even more casual, Anne Arundel Seafood in Pasadena is a pay-at-the-counter, picnic table type spot with great crab legs, jumbo shrimp, and—of course—steamed crabs.

Say hi to your neighbor on their stoop.

Stoop sittin’ is a big deal in Charm City. We might not all have big fancy houses, but remember that Baltimore is the birthplace of the row home, so hanging out on your stoop in front of your house is a great way to pass the time in the warmer months. Bonus fact: Many of the row home exteriors are Formstone, a type of stucco that was commonly layered over brick in the mid part of the twentieth century and originally made popular in this very city.

Learn Bawlmerese and the language of the locals.

It’s not a drawl like the Deep South or even a twang like in Virginia, West Virginia or Kentucky. But locals here speak quickly, with a slew of unique phrases that are native to just a few square miles of Baltimore. “Hon” is an often-used term of endearment by folks throughout the city. If you’re headed to Ocean City or Bethany Beach for a long weekend, you’re not “going to the beach” you’re headed “down the ocean.” “Towel” and “tail” are both pronounced like the latter and the word for iron sounds something closer to “urn.” In case you need to go to a hospital, you’ll get a safe ride in an “amyalance.”

Stay alert on the road.

Hit the road in Baltimore (there’s plenty of Zipcars around), and you’ll soon discover that drivers reserve the right to use their hazard lights on their car in any instance when they feel like stopping. This unexpected traffic action means, “This is where I felt like stopping, OK!?” Hey, every city’s got its driving quirks… Just keep those hands at 10 and 2, and those eyes on the road.

Pay homage to the classic pastime with a smooth glass of Duckpin Pale Ale at Union Craft Brewing.

Duckpin bowling is a big deal.

Duckpin bowling is akin to traditional ten pin bowling, but with shorter lanes, smaller pins, and three frames instead of two. The best spot to get the most unique experience is Patterson Bowling Center on Eastern Ave, just blocks from Patterson Park in historic Fells Point. It’s BYOB, so you and your pals can bring a DD (designated driver), a 30-pack of Natty Boh, and hit the lanes. Classy. Seriously classy.

Or if you prefer your beer by the glass, Baltimore’s best brewery, Union, has a great, very smooth pale ale named for this local bowling pastime. Beyond the inspired brew, Hampden is one of the city’s most unique neighborhoods boasting tons of restaurants, bars and shops, and is very convenient and walkable.

While we can't compete with Central Park or D.C.'s National Mall, there are plenty of great parks within the city limits, like Wyman Park, Patterson Park, and Druid Hill Park. Want to make a great Saturday afternoon for you and a friend? Take your bike—or buy one at Baltimore Bicycle Works right in Station North—and head to Druid Hill Park (just northwest of downtown), for a ride, stopping at the conservatory or even the Baltimore Zoo. From there, you can cut through Remington and Hampden and you’ll be in Wyman Park in just a few miles. And the park isn’t just fun for those of us on two feet (or wheels): Wyman Park is a great spot for your dog and all his or her friends.

Step aside, D.C. The popular Mount Vernon neighborhood is home to the original Washington Monument.

When folks talk about Mount Vernon around here, they're not talking about George Washington's birthplace.

Mount Vernon was the first neighborhood I lived in after moving from Austin a few years ago. It’s less than a mile from downtown and both stadiums, and is only a few blocks from Station North, the Bromo Seltzer Art District, and Bolton Hill (where the Maryland Institute College of Art and Mount Royal Tavern are located).

It’s also within a five-minute drive of Remington, Hampden, and Charles Village. There, you’ll find coffee shops, high-end restaurants, and a slew of ethnic eateries including Indian, Ethiopian, Vietnamese, and Thai. The area is also home to dozens of bars, including the famous gay bars The Hippo, The Drinkery, and Grand Central, and The Brewer's Art, one of Baltimore’s first brewpubs, which has been nationally recognized as one of America’s Best Bars. If you’re into theater, then Center Stage is a great spot right on Calvert St. to round out your cultural conquests.

About the Author: Taylor DeBoer is a writer and promoter living in Baltimore. When he's not sweating at a local show or eating a pulled pork sandwich, he's writing about music for Bmoreart.com, walking aimlessly around Baltimore or drinking whiskey on a porch somewhere.