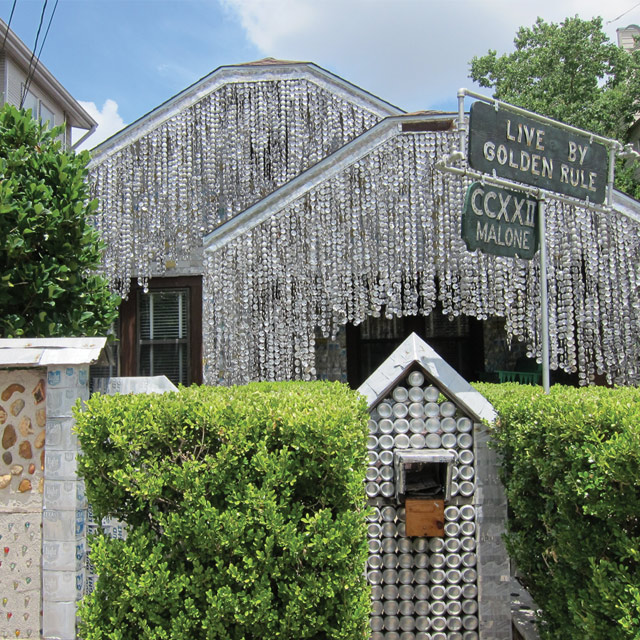 Thanks to the last decade of rapid development, newcomers and longtime residents are re-imagining what it means to live in Houston. You can now stroll downtown to find Zipcars, bike sharing, and a light rail—all perfect for exploring the area’s unique local color.

Houston is also home to an active and idiosyncratic art community that couldn't exist in any other city. With cheaper rents than NY or LA, the availability of large studio spaces has created something of an artistic renaissance. The new director of the MFAH (Museum of Fine Arts, Houston) even hails from the MOMA in New York City.

We found out about a very cool drive exploring the quirky outdoor art of Houston from Pete Gershon, author of “Painting the Town Orange: The Stories Behind Houston’s Visionary Art Environments.” What’s visionary art? It goes by many other names: folk art, outsider art, self-trained art. It’s untaught artists who create without guidelines in pursuit of a vision. In the case of the four visionary art environments below, the artists used the most public canvases they had: their houses and cars.

In addition to having an excellent beard, Pete is the former editor of the experimental music journal, Signal to Noise, an ardent favorite of improv jazz fans. He closed down the magazine after 13 years and looked for his next passion in Houston. Through research and talking to locals, he discovered several quirky Houston landmarks that captured his curiosity.

“You can walk up to these places,” explains Pete, “have no context and appreciate them, but the essence of the art is knowing the stories...Why would somebody invest so much time, money, and effort into something so incredibly strange?...It’s really the purist and truest art. They created these sites because they had to. It was their destiny and there was almost no other choice.”

"The Orange Show" (2402 Munger Street, Houston, TX; orangeshow.org; 713-926-6368) is a 3,000 square foot shrine to the orange, built single-handedly by Jeff D. McKissack, a retired Houston mail carrier. In 1966, he had an epiphany: to build a monument to the orange and to steam power (cause those two go together like peanut butter and jelly.) “He was an eccentric,” Pete says. “He really thought people’s lives would be better if they drank a glass of orange juice every day.”

Get your daily serving of vitamin C at The Orange Show, one man’s quirky homage to the good-for-you fruit.

McKissack spent 20 years of his life designing the site to educate people about nutrition and the environment. “This guy thought this was going to be more popular than the Astrodome,” says Pete. When he finally opened it to the public in 1979, he was flabbergasted that no one came. But it just took a while. Since his death in 1980, the Orange Show has been visited by thousands of people, including famous artist Willem de Kooning, and is on many top 10 lists of things to see in Houston.

After McKissack’s death, a group of wealthy art collectors bought the site and kept it open. Today it’s a base camp for a foundation that offers art workshops, administers the popular Houston Art Car parade, and runs the Eye Opener Tour. The now-formed Orange Show Center for Visionary Art’s tagline is appropriate: “celebrating the artist in everyone.”

NEXT STOP: THE BEER CAN HOUSE

According to the Orange Show website, “Ripley’s Believe it Or Not estimated that over 50,000 cans adorn this monument to recycling.” In addition to siding the house, dozens of can-top garlands hang down and jingle symphonically in the breeze. “The Beer Can House was built by an old retired railroad worker with a sense of humor,” says Pete. “It was essentially a huge craft project.”

Aluminum siding gets a fresh spin at the Beer Can House, where garlands, wind chimes, and decorative exterior walls are all crafted from—you guessed it—beer cans!

You may be thinking right about now, were these guys basically hoarders? Pete: “Yeah, kinda’. But there’s something really beautiful in it. Every one of those beer cans is an afternoon, sitting in the yard, playing with his kids, an accumulation of life experience.”

“Certainly there’s a compulsion there – a compulsion to save but also to create. For the Flower Man [the next stop on our tour], it was a practice in his daily life that kept him from drinking. Gave him purpose.”

Cleveland Turner (“Flower Man”) was just passing through on his way to California. He wanted to see the world, but sold his bus ticket to buy more Thunderbird and never left Houston. On a particularly bad night, Turner nearly died. “While in the hospital, he had this vision of junk rising up in the sky and depositing itself on a fence,” says Pete. So he made a bargain with God: he would make his house beautiful for all to enjoy if the Lord would keep him sober.

Thanks to the Flower Man, this Houston yard is blooming with a potpourri of wacky items, from mirrors to toy trains to Mickey Mouse.

The Flower Man’s House (2305 Francis St., Houston, TX; www.roadsideamerica.com) was more than just flowers. People driving by would leave something to add to his found art collection. A quote from Turner's Houston Chronicle obituary included a partial list: “Mirrors, horses, flowers faux and real, Mickey Mouse, two versions of the Last Supper, two Santa Clauses with brown-painted faces, European knights in armor, and toy train engines attach to the building in unpredictable formations; three full packages of lipsticks in an array of reds and browns adorn the west wall…Clocks of all types, none of which work, are displayed in abundance, serving as reminders of our own destiny.”

His ‘yard art’ was not necessarily appreciated by all. (There’s a fine line between artwork and junk.) But while he lived, Flower Man’s mission was simply to make people happy. “It wasn’t just the house,” says Pete. “He was the art. It was his story and his presence that was the art: one colorful bright spot in a bleak neighborhood.”

You can take a Zipcar to tour all of these spots pretty easily. If you’re driving by, don’t worry. You couldn’t possibly miss them.