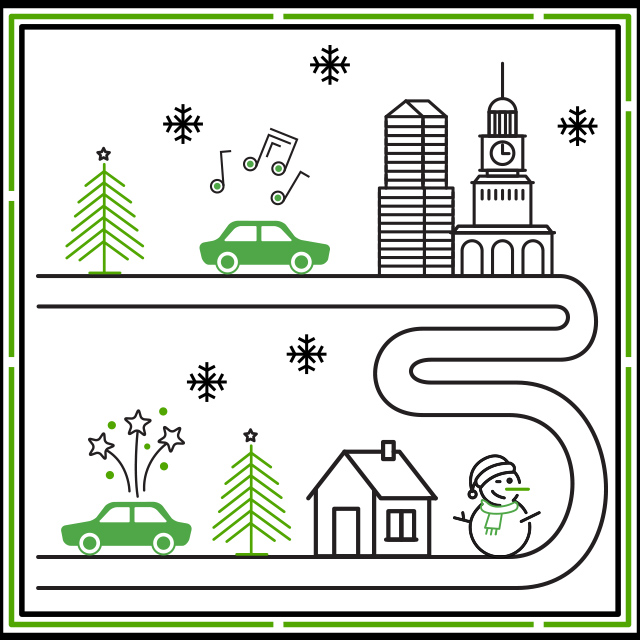 Sure, we all know the holidays are the quintessential time for sending picture-perfect greeting cards to far-flung friends and family. And it’s no secret that the holiday season is also primetime for millions of folks to hop in a buggy to shop for the uncle who has everything, lug home the burliest sapling yet, and head over the river and through the woods (to grandmother’s house we go!).

These merry milestone times in the car are when memories and special connections are made, year after year. (And—not to toot our own French horn—we’re thrilled that we can help car-free city dwellers experience these festive flights of fancy, too.)

But beyond stowing seemingly endless rolls of giftwrap in the trunk and a peppermint mocha in the cup holder, what really goes on inside cars for American adults during the holidays? We weren’t certain. And so—with the help of Harris Poll—we asked, compiled stats, then made a list (and checked it twice).

First things first: Despite the hubbub surrounding the holidays, we were shocked to discover that 80% of holiday road trippers say they like to take their time and enjoy the ride, with only 20% reporting that they'd rather kick their reindeer into overdrive to arrive at their destinations ASAP. (What’s that about a holiday rush, again?)

Surprisingly, leading the slow car movement are tough-driving Northeasterners, 86% of whom reported preferring the leisurely approach. Meanwhile, millennials landed on the other end of the spectrum, favoring getting the holiday trip over with sooner rather than later.

Road rage is also absent from the holiday driving equation. Rather than feeling cooped up on the road to in-law central, nearly three in five (57%) report that the time they spend in the car is a meaningful component of their holiday traditions. Nearly two thirds (64%) particularly value the time to unplug and disconnect from technology.

But beyond just a welcome tech detox, this time spent away from devices and push notifications gives way to genuinely fulfilling bonding time—68% say they feel closer and more connected to the family and friends they’re driving with.

Just how is this bonding going down? Twenty-three percent use the drive time to “mentally prepare” for extended time with family, catching up with their significant others on dos and don’ts for interacting with their in-laws, running through extended family members’ names, or brushing up on important events.

Men and women are almost equally likely to need this time to catch up (25% and 21%, respectively), but Gen X men need a little more help. Fellas aged 35-44 are almost twice as likely as their female counterparts (29% vs. 16%, respectively) to use their in-car time to psych themselves up for family time.

And while most value family togetherness over the holidays, nearly one quarter of adults (22%) have made up an errand to get some alone time in the car during the holidays. Parents are more than twice as likely as adults without children (33% compared to 16%) to concoct a reason to spend time in the car alone. (Sorry, kiddos. Sometimes “peace” really means “peace and quiet.”)

Speaking of peace and quiet, nearly one in five (18%) report that if they’re not behind the wheel during their holiday travels, they’re sleeping in the backseat. They might have a hard time catching that shuteye, though, as 17% consider themselves “talkers” and find car rides are best for long conversations. Thirteen percent state their main role as a passenger is DJ, and take full responsibility for keeping the tunes going.

And the tunes that get cranked? The so-called “Queen of Christmas” still reigns. Mariah Carey’s “All I Want for Christmas Is You” is the favorite holiday song among Americans spending time in the car this holiday season. Millennials in particular love Mariah—23% ages 18–34 named her yuletide hit as their fave.

But vocal pyrotechnics prove to know no gender: Men and women are almost equally as likely to sing along and try to hit Mariah’s high notes (12% and 14%, respectively). On the mellower side of the dial, Bing Crosby’s classic “White Christmas” is the second top choice, favored most by seniors (29%) sticking with what they know and love.

“Love” is certainly at the heart of most holiday celebrations…even ones arranged discretely in the backseat. Yup, putting the “X” in “Xmas” are these juicy findings.

Nearly 1 in 10 have pulled over for a "quickie" while traveling for the holidays. Gen Xers are most likely to engage in some breakdown-lane lovin’, even more so than Millennials; nearly 1 in 5 adults aged 35–44 (18%) have reported getting some backseat booty, compared to 13% of millennials (ages 18-34).

Married and unmarried people are just as likely to engage in such roadside activities (both 9%). And parents in particular are using car time to stay close: parents are nearly three times as likely as people without children (16% vs. 6%) to make a pit stop for some intimate time. (We assume the kids are away making snowpeople with their grandparents.)

In each case, the adage that men are more likely to kiss and tell still applies. No matter their age, men are approximately twice as likely as women to boast about pulling over for roadside affection (13% vs. 6%) or sneaking out of the house for a secretive hook-up in the car (11% vs. 6%).

Wherever you and your loved ones are headed, and whatever holidays you may be celebrating—and with whom, and to what soundtrack—we wish you the happiest of times reconnecting.