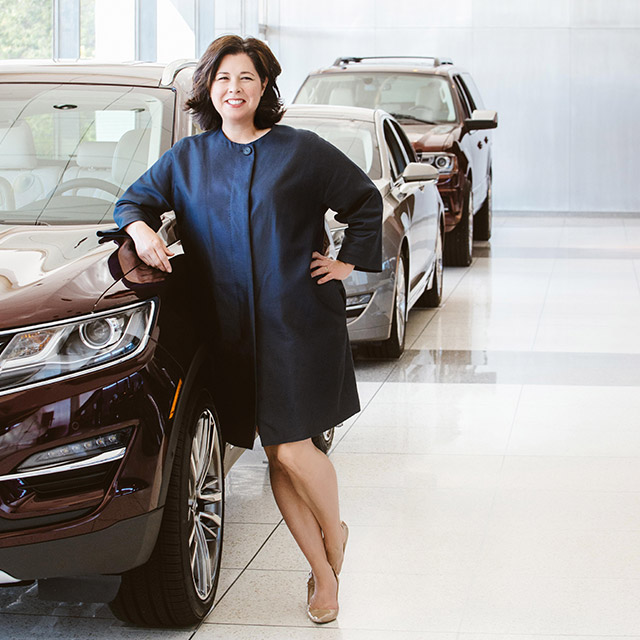 If we could design a new dream job, we might land on something like “Futurist”—crystal balls, shiny gadgets, and time machines included. For Sheryl Connelly, it’s a real title she wears with pride every day at the Ford Motor Company headquarters in Dearborn, Michigan.

What does it mean to be a Futurist? “I can tell you what it doesn’t mean,” Sheryl starts. “I have to remind people on a regular basis that no one can predict the future.”

Instead, she’s tasked with looking at the hard questions of tomorrow (and way, way beyond). What will cities look like? What role will cars play in daily life? Should Ford start making hoverboards?

It’s all big questions and open discussion in the office of Sheryl Connelly, Ford’s Futurist.

BACK TO THE FUTURE

While the company has always looked ahead to plan for the long term, Sheryl and her team started to develop a centralized strategy (with new job titles) 11 years ago. From there, her task force took on the work of tracking patterns, identifying trends, and collecting data about anything and everything in the world. With disruptive innovations happening on a regular basis in all industries, anything could become relevant to Ford: changes in housing, entertainment, or higher education could all affect cars.

Above all, they questioned. “You have to slow down the conversation enough to say, ‘What makes you believe that?’” says Sheryl.

Of course, the tricky nature of this job lies in the unpredictability of the future. The key lies in thinking big. Really, really big. Looking at topics as broad as healthcare, fashion, even marriage—and yes, transportation—is no simple feat. Why so varied?

“Ford doesn’t need another automotive expert,” Sheryl is quick to admit. “It needs someone that looks at things that they don’t have time to explore.”

She brings to mind a video about selective attention that went viral. (Truly: It racked up almost 13,000,000 views on YouTube.) Called “The Invisible Gorilla,” the video shows two teams of basketball players and instructs the viewer to count the number of times the white-shirted team passes the ball. If you’re focusing solely on the ball, you completely miss a gorilla walking smack-dab through the middle of the scene. “The people that miss it are the ones that have their eye on the ball,” she says. And that’s how Sheryl sees her job: an eye on the miscellaneous while others are focused on the ball.

Inside the office, Sheryl is famous for doodling her notes to inspire ideas.

One thing Sheryl doesn’t do is tell other departments at Ford how to interpret her findings and apply them to the cars. As she puts it, “I can’t tell you what the gorilla means to you, but I want to let you know that I saw it.”

Instead of sharing insights and connecting the dots as they apply to the automotive world, she uses her reports as a jumping-off point for collaboration. “It’s functionally agnostic with universal implications,” she says. From engineers, to designers, to marketing, it’s all relevant—but in whatever way they interpret it.

Since Ford handles business internationally, messages take different forms around the world. A pattern of aging populations can have an effect on anything from operations to ergonomics, and it will likely have different influence in Germany than it will in Japan. That’s the beauty of the Futurist. She thinks big about culture, society, and humanity, and it translates in almost unlimited ways: “I need to give you global insights, but regional implications.”

Working on the future is no small task—Sheryl is often collaborating with others.

WHAT’S DOWN THE ROAD

Now, about that future. What can we expect?

Lucky for us, Ford shares our interest in the future of transportation and mobility, especially in urban areas. “From an automotive standpoint, if you’re a Baby Boomer, the car stood for freedom and adulthood,” she shares. “On the other hand, Gen Xers prize family and work-life balance. The car is an enabler, a sanctuary to connect.” The cultural evolution of each generation shows what they value (although we know that the lines are influenced more by environment than by age).

“We believe that individual car ownership is not going anywhere. It will evolve, though.”

The most important factor is starting early. “The reason we’ve done well with millennials is we started thinking about them 15 years ago,” she says. “It’s never too soon.” It’s that kind of planning that gives consumers options, from owning a car, to taking the many forms of public transportation, to—our favorite, naturally—car sharing.

Sheryl’s office walls are covered with infographics, pictures, and quotes for creative decoration (and inspiration).

Changing attitudes about personal vehicles are only natural in our rapidly growing world. Ford knows to take the one-size-does-not-fit-all approach. Especially in the city, people have dynamic needs.

She turns her attention to a big driver of this change: According to some reports, half the world’s population will live in cities of over 10 million people—making them “megacities”—by 2050. Whoa.

While everyone from city planners to engineers are working on innovations to accommodate growing populations, it’s clear that we might benefit from new ways of commuting and traveling. The idea is so prevalent that it’s shifting the larger goals of the company.

“Bill Ford spent years trying to sell as many cars as possible,” says Sheryl, “but now he’s rethinking that.” This renewed attitude takes in the larger picture of urban mobility. She mentions “multi-modal forms of transportation,” a technical term for the many ways we choose to get around every day. You might drive to the train station, take the train into the city, and hop on a bike share for the last mile. Based on her research in these areas, Ford has invested heavily in mobile experiments around the world.

The team’s research is compiled into an annual report released by Ford, so all can benefit from the wisdom.

What’s next on the radar of the Futurist? The myth of multitasking. Her team is looking at the all-to-common phenomenon of the “fear of missing out” and the urge to be everywhere at once. From our perspective, there’s no need to rush to do it all today—the future is looking pretty sweet.

Another day, another successful look at what’s further down the road.

What’s your vision of the future of transportation? Tell us your predictions in the comments below.