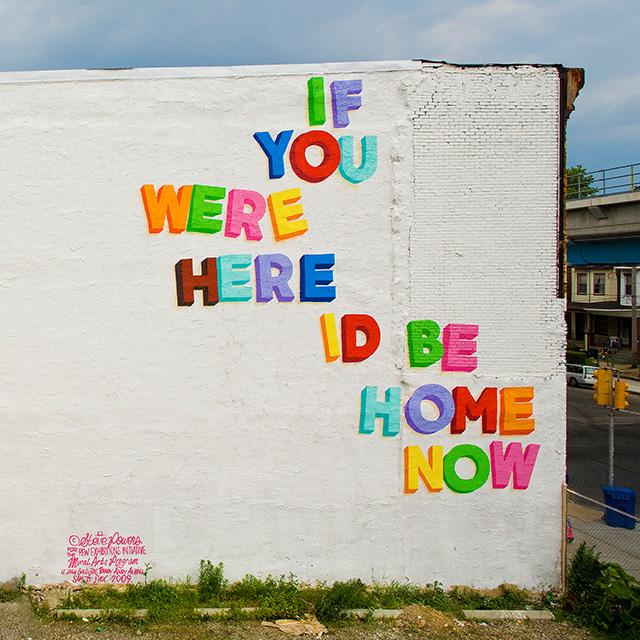 Philly’s The Unofficial World Capital of Murals—See Why

For the last 30 years, Mural Arts—a Philadelphia nonprofit that started as an anti-graffiti initiative that painted murals over vandalized buildings—has been going, well, off the wall. And in more recent years, it’s been moving off the wall and out of the box to have renowned artists from around the world revitalize everything from battered streetscapes to trash-strewn train tracks.

This burst of creative progression didn’t happen overnight. Since its beginnings in 1984, Mural Arts has morphed “at 100 miles per hour,” according to Jane Golden, the program’s guiding light. The result? It’s now a formal, multi-faceted program that pairs professional artists with community participants, from schoolchildren to activists to prisoners. So far, their cumulative efforts have yielded almost 4,000 murals—making Philadelphia the unofficial world capital of the form. About 200 artists currently appear on the organization’s roster.

This month, Mural Arts is culminating a yearlong 30th anniversary celebration with “Open Source,” a citywide exhibit of large-scale, temporary works, curated by Boston-based Pedro Alonzo. This street art festival features more than a dozen international artists who have come to Philly to paint the town red…and yellow, and purple.

You don’t need to be in the inside track to spy all the artistic hot spots that have paved the way to “Open Source” today. If you’re in the area, you’re all set to take the self-guided walking tour of 28 murals scattered throughout Philadelphia’s walkable downtown. The tour ranges from 7th and Chestnut, where Joshua Sarantitis’s “Legacy”explores Philadelphia’s role in trading slaves, to a “Frank”-centric mural painted on the wall of a bar at 13th and Pine that recently added one more celebrity by that name—Pope Francis, in honor of his recent historic visit to the city.

Golden often refers to the collection of murals as a “biography of Philadelphia.” She explains, “In a variety of ways, they spotlight scenes, people, and issues that were at some point important to the city.”

Love is in the air (and all over Philly walls) when it comes to Steve Powers’s sprawling typographic tribute to his hometown, “A Love Letter For You.” Photos by Adam Wallacavage, courtesy of City of Philadelphia Mural Arts Program.

Increasingly, artists are more thoroughly embedding themselves in Philadelphia neighborhoods and participating in an art movement known as “social practice.” “We'll always do walls,” says Golden, “but we’re expanding our horizons to really push ourselves to think differently in a richer, deeper way. Social practice is now a buzzword in the field, but we’ve been doing for 30 years,” she continues. “Involving the community and addressing difficult issues has been in our DNA from the beginning.” Golden estimates that these days, only about a third of the organization's projects are traditional wall paintings.

One of the earliest and most popular examples of this relatively new strategy was Steve Powers’s “A Love Letter For You.” Composed of 50 rooftop murals along a West Philly retail corridor that collectively formed a love letter from a guy to a girl, the series also served as a valentine from the artist to his hometown. A few years later with “Philly Painting,” Dutch artists Haas and Hahn engaged Germantown’s small business owners and neighbors to help paint bold blocks of cerulean, celadon, and crimson on the facades of storefronts along a commercial strip. At the least, it was a sweeping act of beautification; at the most, a much-needed economic stimulus.

A PLATFORM FOR PUBLIC INVOLVEMENT

With “Open Source,” its most ambitious undertaking yet, Mural Arts continues to encourage the creation of art in unexpected places. While most go beyond the traditional mural form, some don’t use paint at all. Los Angeles-based artist Shepard Fairey, best known for his creation of the Obama "Hope" campaign poster, is tackling issues related to mass incarceration by developing a series of images (following on dialogue with inmates) that will be used as stickers for the public to distribute to raise awareness.

In “Labyrinth,”artist Sam Durant, also of L.A., addresses the morass of the criminal justice system by placing a 40’x40’chain link maze on the plaza of the city’s municipal office building. British artist Jonathan Monk, on the other hand, has inserted two temporary sculptures based on concrete works by the minimalist Sol LeWitt and installed them in Paine’s Park (the city’s skateboard park). As skaters take flight upon their surfaces, these public artworks invite direct, physical interaction from the viewer. And two Philadelphia-based art collectives have even commandeered entire buildings for their projects: the Dufala Brothers, in converting parts of a vacant Art Deco school in South Philadelphia into a waste transfer station, and Amber Art & Design in transforming a North Philadelphia warehouse into a community center and pop-up bodega.

In a project headed up by MOMO, a New Orleans artist known for his use of practical geometry to create abstract public art, his participation with the public couldn’t be more direct either. While his contribution is primarily a vibrant mural on a blank wall in the city’s Fishtown neighborhood, there’s more than meets the eye. For one thing, students in Mural Arts’ art education program assisted in designing and painting the mural, which involved his first teaching them about measuring lengths, areas, and volumes—lessons that were captured in a video that will be posted online to share with other students. “Practical geometry is the language of architecture,” MOMO says. “So, it’s cool to borrow it while painting on buildings.”

Best of all, the impact of this colorful mélange of swooping curves and thrusting angles will reach further still in the form of a Zipcar VW Golf parked at 30th Street Station that’s been wrapped in its image. “Car design is its own type of architecture,” MOMO observes. “The lines and rhythms of the mural look great running over the car.”

Kids of all ages enjoy a hands-on art demo with MOMO’s guidance. Photo by Frank Angel.

This is the fourth time that Mural Arts and Zipcar have collaborated in such a way, according to Caitlin Butler, director of development for the nonprofit. “Our work together grew out of our shared interest in bringing design and art to new spaces,” she says. A portion of proceeds from reservations of the wrapped car will loop back into the education program.

MOMO’s sweeping geometric mural looks equally stunning on the outside of a building and a specially wrapped Zipcar. Photo by Frank Angel.

This melding of art and community enrichment is at the heart of Mural Arts’ enduring mission. “Mural Arts will never lose the soul of its origins,” Golden sums up. “But there are really great opportunities to think big about ways in which we can transform our environment in different ways. ‘Open Source’ may be our latest, but I’m excited to see what the future holds.”