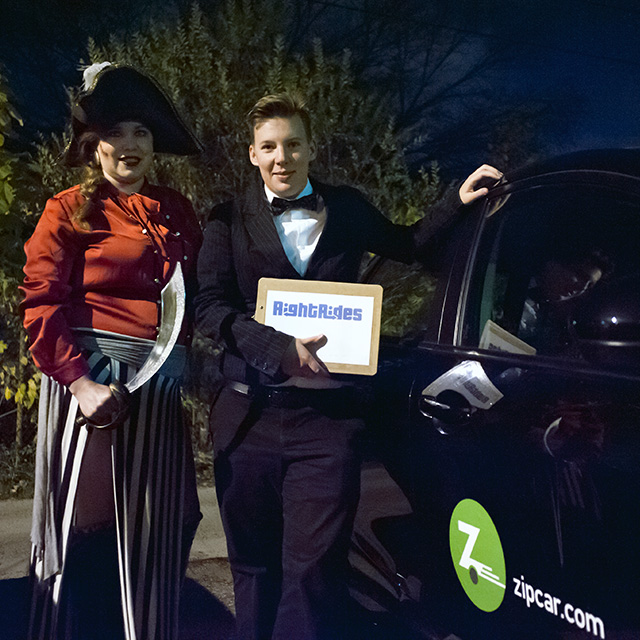 A Safe Ride Home for Women and the LGBTQ Community

When you go out at night, you probably have a lot of options for how you get back home. Whether you’re walking, biking, or taking a bus, subway, or taxi, the most important factor is safety. Sounds simple, but unfortunately, this is easier said than done for many people, especially when considering cost, time traveling alone, and street harassment. That’s why the Collective Action for Safe Spaces, a Washington, DC-based organization that works towards an environment free from sexual harassment and assault, decided to address what they call the “safety gap.”

Enter RightRides DC, a pilot program providing free rides home for women and LGBTQ-identified people in the downtown DC area. With community safety at the forefront, several volunteers underwent a screening process to become part of two-person driver/navigator teams, who worked a late-night shift for the soft launch on Halloween night. From 12 a.m. to 3 a.m., volunteers drove in donated Zipcars, responding to calls for safe rides home.

Emily Hammell, a RightRides driver, declared the night an overall success, and relayed her passengers’ gratitude for a solution to a safe transportation problem that can go overlooked. “Even with a car service where there’s structure to it, people are still going to have negative experiences,” she recounts. One woman told her that she has not taken a cab in two years, since an experience with a driver who asked overly personal questions about her love life and stalled in dropping her off.

And even in a city with one of the nation’s best public transportation systems, an easy way home is not always within reach. “Our metro system is pretty solid, and so is the bus, but there’s still the risk when you’re on there. And unless you have an apartment right above the metro, you’ve gotta walk home and that’s also risky. If cost is a concern, people will take public transit as far as they can, and then they’ll take a taxi or other car service from there, which may experience surge pricing during peak hours.”

It’s not every day you spy a pirate hat on the dashboard. (But RightRides isn’t an ordinary car service.)

With cost in mind, rides from RightRides DC were free. However, Emily’s team collected voluntary donations throughout the night that will help keep the program going. “People understand how valuable the service is that we’re providing. They’re willing to support a service like this.”

In the long run, she hopes to see RightRides expand to the entire city or at least a larger part of it. While this was the first night for RightRides DC, organizers hope to provide the service in the long-term and have partnered with Zipcar for at least three more events in the next year.

Want to help? RightRides DC is made possible by volunteers and donations. Visit here to support the program in reaching its goal of safe rides home every Saturday night. RightRides is also crowdsourcing input to help determine the next night of service. Vote here.