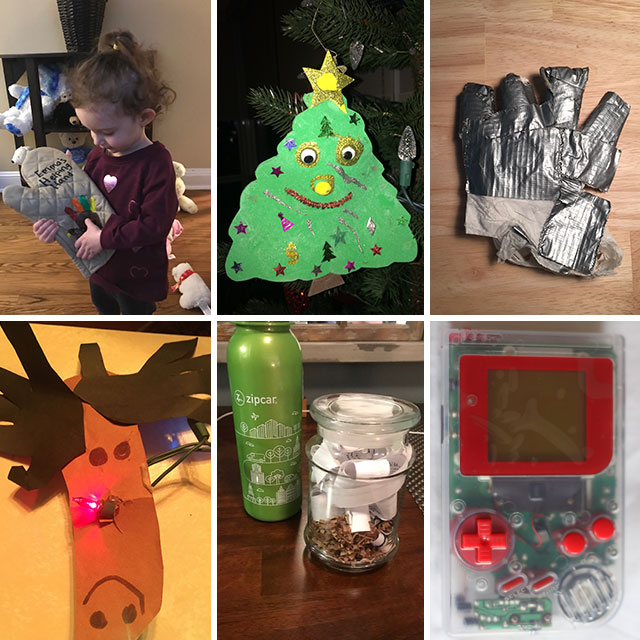 The Best Homemade Gifts Ever (According to Zipsters)

For some people, it can be hard to find the right gift. Whatever they’re into, they probably already have and you don’t dare get them the wrong thing—or worse, something they already own. Hearing, “Oh, I already have the collector’s edition of Twilight,” will leave you crestfallen. (Probably for a couple of reasons.)

But there’s an answer for these hard-to-shop-for folks: Homemade gifts. The best part is, no matter what you make, the fact that it was made by your own hands says more than any “perfect” gift could. Here is our round-up of our favorite homemade gifts made by or given to Zipcar employees across North America. Take these ideas and run with them for your own homemade gifts.

It’s the thought—and love—that counts when it comes to homemade gift making.

You Really Know Me

Handmade presents, like this “Jar of Hope,” are meaningful and one-of-a-kind. Image courtesy of Zach Pacheco.

Many of the best homemade gifts often show that the giver has been listening, and know what you really need beyond material goods.

For Zach Pacheco, our member services associate in Denver, it was a friend’s gift of a “Jar of Hope” that helped him get through the passing of his father. The jar contained slips of paper, “all wrapped up pretty,” with inspiring and comforting quotes. “Every day I would open up a new quote that helped me get through a difficult time,” says Zach.

Holly Moody, senior manager of software engineering at Zipcar’s home office in Boston, will never forget the special gift she received from her son, who has Down syndrome. He was returning home on a flight and proudly gave her an airplane barf bag decorated with hearts and the words “I love you Mom” written on it. “I’ll never forget that it struck me that the most precious gifts are not always presented in traditional ways!”

Jann Kalscheur, a fleet associate for university and campus vehicles, remembers one gift in particular from when she worked as a public school teacher. She had a student from Paraguay who was incredibly anxious about taking her public speaking class. Jann reassured her that if she could get through the class, any speaking she did in the future would be easy. “She thrived,” Jann says.  And at the end of the year, in a school which strictly forbade distributing sweets and unhealthy food, Jann received a bouquet made entirely of candy bars from the student. “She decided to top it off with an apple for good measure. Of course, I ate the candy bars first.”

When giving a homemade gift, channeling your own interests and skills can make for the best and most unique gifts of all.

For Zipcar software engineer Jon Prusik, his wedding proved the perfect time to take his love of tech and gaming and offer his groomsmen something unique and memorable. “I decided to build a customized original Game Boy for each of them.” John took his expertise in creation a step further by going super retro. The Game Boys were based on the earliest models—known as “Dot Matrix Game Boy”—gifts that were both heartfelt and rare for his groomsmen.

Roslyn Person, a member services associate in Washington DC, was amazed when her nephew, who is an aspiring architect, presented to her and the family his rendition of Hogwarts—made entirely out of cardboard boxes—as a gift one year. He even drew in a few dementors!

Cabell’s homemade protective glove for his mom proves that it really is the thought that counts. Image courtesy of Cabell and Julie Shulman.

Julie Shulman, associate creative director at our Boston office, has her young son Cabell to thank for keeping her hands free from danger. He made her a “protective glove” so that she would avoid cutting herself while slicing vegetables. Fashioned from duct tape and toilet paper, the glove has yet to make an appearance in the kitchen under real world conditions, but we love that Cabell is interested in eating his veggies and thinking about his mom’s safety!

Gifts That Keep On…

One of the best things about homemade gifts is that people tend to keep them forever, too.

For Philadelphia fleet associate Christian Poarch, he remembers the best homemade holiday gift he made was for his mother back when he was 12. He knew her favorite flowers were lilies, and he was keen on giving them to her, but he wanted to make sure they lasted a lot longer than the holidays. Chris decided to paint one for her and she was thrilled to receive it. “She still has the painting today!”

For Margaret Lapp Collins, marketing specialist for universities, the Rudolph the Red Nosed Reindeer ornament (complete with a light-up nose) she created when she was in kindergarten is still a staple of her family’s Christmas décor. “It’s my Mom’s favorite ornament and has somehow survived every Christmas,” she says. “Maybe this year we’ll laminate it.”

The same might be said for the Christmas ornaments that Toronto market manager Sharon Dern’s sons made for her as children. She recalls when her boys would make wish lists for Santa and how the boys woke up very early on Christmas morning. While many of her family’s traditions remain today—eating Grandma’s cabbage rolls and the smells of Christmas baking—her experience is different now that her children are grown. “But somehow looking at these ornaments each year brings me back to the days when they were very young and always very excited about Christmas.”

No matter the occasion, a homemade gift often holds more value for the receiver—and giver—than you may realize!

What homemade gifts have you received or given that hold special meaning to you or your family? What homemade items have become part of your life or family traditions? Let us know in the comments below.